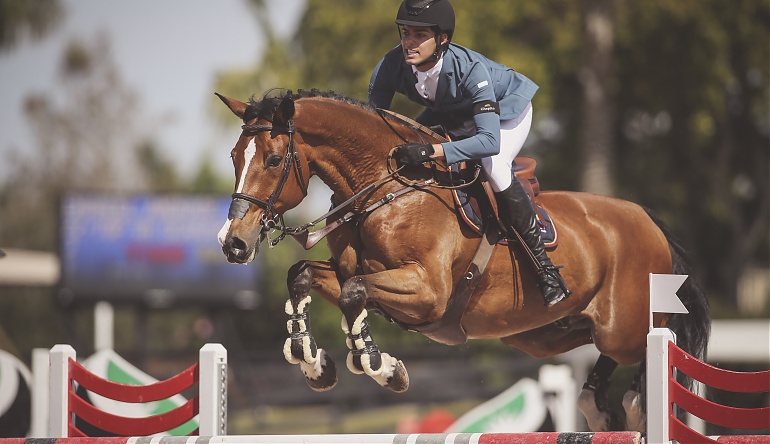 Emanuel Andrade is considered one the hottest new talents in the sport of show jumping. Only 18 years of age, the young athlete has already amassed a string of high profile victories across the globe.

Emanuel first stepped on to the international stage by dominating the high-profile 2012 Winter Equestrian Festival in Wellington, Florida, where he won six Championship and 12 Reserve Championship titles. At the end of the 12-week show jumping tournament, Emanuel was selected from thousands of athletes as the Future Champions Leading Junior Jumper Rider.

In a feat never before accomplished by a teenager, Emanuel was named the Overall Jumper Rider at the 2013 and 2014 Winter Equestrian Festivals while Hollow Creek Farm was crowned the Overall Jumper Owner. In 2015, the accolades continued to roll in as Emanuel, now competing at the grand prix level, won the Hermes Talented Young Rider Award.

In 2013, in what would be the first of numerous team appearances, Emanuel made his senior team debut riding ZZ Top as a member of Venezuela’s Gold Medal team at the Bolivarian Games held in Trujillo, Peru. In 2014, he made his first major games appearance at the Alltech FEI World Equestrian Games in Normandy, France, before he had even celebrated his 18th birthday. Weeks later, Andrade rode in the 2014 Furusiyya Nations Cup Final in Barcelona, Spain. The icing on the cake came at the end of November at the 2014 Central and Caribbean Games in Veracruz, Mexico, where Andrade’s impressive results riding Nokia de Brekka earned him the Individual Silver Medal.

A student in his hometown of Caracas, Emanuel divides his time between competing in Venezuela and in the United States. He currently trains with 2004 Olympic Champion Rodrigo Pessoa of Brazil.

Recognizing the importance of giving back, Emanuel is a strong supporter of the Step by Step Foundation, an organization dedicated to enhancing the lives of underprivileged children by creating and supporting health, nutrition, water, education and other programs that substantially impact the human rights and development of children.

2016 Global Champions League as the U25 rider for Vienna Eagles.