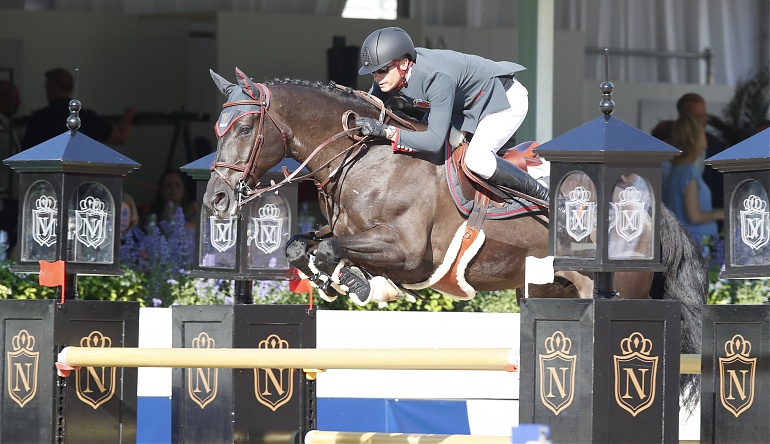 Jérôme Guery (born 24 July 1980) is a Belgian Olympic show jumping rider. He competed at the 2016 Summer Olympics in Rio de Janeiro, Brazil, where he finished 28th in the individual competiton with his horse Grand Cru van de Rozenberg.

At 10 years old Jérôme began riding a pony. For 8 years, he was supported by his parents, trained by his father-in-law, Jean-Pierre Thonet and regularly followed Nelson Pessoa. In 1998, the then 18-year-old won the Belgian championship for Juniors. At the age of 19, he started out independently at the « Hayettes stables » where he trained numerous young horses - among which were Mozart des Hayettes and Hugo Gesmeray.

In 2000, Jérôme met his future wife Patricia. In the summer of 2001, Jérôme and Patricia started their own stables. At first, they settled in Jérôme's family stables in Assesse, before moving to the stables of Harnoy.

In December 2006, after long searches, they bought a former farm building surrounded by 5 hectares in Wallon. The first horses arrived at Guery Stables in October 2007.

In 2010, after a big work realized with Waldo and after numerous victories with the latter but also with Ramiro de Bellevue, Jérôme entered for the first time the Super League by participating in the prestigious CSIO of La Baule (France).

At the same time, Jérôme and Patricia continued to train numerous young horses with their partner and friend Luc Henry. This is the way Tic Tac du Seigneur, bought together at the age of two, and after a long training, allowed Jérôme to be crowned Belgian Champion in 2012.

It belongs then to Upper Star, bought at the beginning of 2011, while he evolved in 1m level competition, to become successful and to compete with the most famous riders during the prestigious competition in Aachen, August 2013. During this summer, stables Guéry also began a new collaboration with « L’élevage du Seigneur » by welcoming the brother of Tic Tac du Seigneur, Boyfriend du Seigneur who will be, one year later, 3rd of the Belgian’s championships of the 7 years old horses in Lummen.

During the CSIO of Lummen in 2014, Jérôme also reached the 3rd place of the Grand Prix with V Pleasure, renamed Curtis by his new owners. By the end of the summer, 2014, the Guéry stables which counted already two additional breeders with Daniel Boudrenghien (the breeding Sitte) and Don Leys (Hedonist breeding) began a new collaboration with the breeding of Mariposa (Koen De Brabander) by welcoming the daughter of talented Flora de Mariposa.