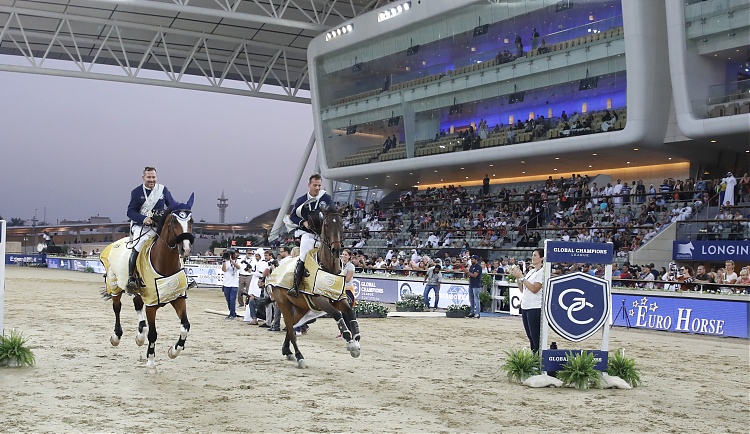 Diamonds Shine Brightest of All To Take 2017 GCL Championship

18 teams kicked off the 15-event season in Mexico City, and in a Championship that has seen a rollercoaster of results and battles, it all came down to AL SHAQAB, Qatar, with a two-team head to head.

Harrie Smolders of the Diamonds, who has secured an unprecedented double as the star Dutch rider is also the winner of the 2017 Longines Global Champions Tour said: "I see a big growth in potential for the Champions League. We will definitely come back and we enjoy being a part of it - it makes our dreams come true."

His team-mate Eric Lamaze, riding with a rib injury, added: “I was honoured in Florida when Axel Verlooy asked me to join the Hamburg Diamonds.” Reflecting on the season he said: “It was magical. I knew I wanted to take this seriously and try to bring my best horses to every event."

Hamburg Diamonds’ other key players this season have been John Whitaker, Audrey Coulter, Jos Verlooy and Piergiorgio Bucci who joined the team during the transfer period before Rome.

Valkenswaard United, who took the title in the inaugural GCL last year, were represented by Bertram Allen with Molly Malone and Alberto Zorzi with Fair Light van’t Heike in this glittering final and both produced measured double clears to soar clear of a high class field of 18 teams.

“We came here knowing we had to win here today, and unfortunately it wasn’t enough to win the League, but we gave it a good shot all year,” said Bertram. “We’ve had plenty of ups and downs but at least we finished on a really great note.”

In a hotly contested race to the end, some intrepid riding from the Mexico Amigos helped them secure the final spot on the GCL podium in third.

As the blazing sun set behind the magnificent AL SHAQAB arena, the scene was set for a fierce head-to-head as the GCL drew to a nail-biting conclusion. With AL SHAQAB celebrating it’s 25th Anniversary there was an excited atmosphere with a big turnout of families, tourists, and expats enjoying the ringside cafes, kids club, art and entertainment activities.

Coming into the final leg of the GCL championship, Hamburg Diamonds headed the leader board ahead of defending champions Valkenswaard United, setting up a thrilling two-way battle for the top honours. The Diamonds just needed to finish eighth or better to claim this year’s title, but a nine-fault total in Thursday’s first round had left them with an uphill challenge from 11th position, if they were to beat their closest rivals, United, who held all the cards ahead of Saturday’s final.

Immense pressure fell on the Diamonds duo of Eric Lamaze with Fine Lady 5 and Harrie Smolders with Don VHP Z. Their first rider Lamaze produced the round of his life on Fine Lady 5, with an absolute flier to the last to post a vital clear, which moved the squad up to seventh after the first riders had completed. The pain was etched across the Canadian’s face as he left the arena — he’d given his all to keep the team dream alive and pushed his team into the vital top eight.

Valkenswaard United’s Alberto Zorzi and the game mare Fair Light Van’t Heike kept his side on a zero score and in a fighting position as their sublime clear moved them into the lead while leading contenders the Paris Panthers and Mexico Amigos each added four faults.

Both second riders from Hamburg Diamonds and Valkenswaard United required clears – the latter to remain top of the podium, the former to keep clawing up the leader board and just a time-fault could have dropped them out of title contention.

Hamburg fielded their star striker Harrie Smolders and Don VHP Z, a leading combination of 2017 with a 70% clear round strike rate in this. Hearts stopped with the faintest tap of a pole but they soared across the finish with just a fraction of a second to spare. This sealed the championship and celebrations erupted on the Kiss and Cry.

As the class reached its final stages, Bertram Allen and Molly Malone, ears pricked and full of running as always, set off, brushing away the immense pressure, and a solid clear produced the win, Valkenswaard United’s fourth of the season, but they had to settle for the runner-up spot in the overall rankings.

Italian rider Zorzi said: “I’m so proud of our team. We may be second this year, but it’s been a great season.” Also representing United this season have been Marcus Ehning, Janika Sprunger and Sanne Thijssen.

There was an equally fierce battle for the final podium spot with St Tropez Pirates, Miami Glory and Mexico Amigos the key contenders.

Gutsy, power jumping was required from the outset as course-designer Uliano Vezzani posed some serious questions, as befits the final of the GCL. With the fences snaking their way to every corner of the vast arena, there was plenty to distract horses and a particularly tight time allowed required riders to maintain the tempo across the immaculate surface.

The first tough line came from a light and airy vertical-to-oxer double at five a and b, followed by a mighty square oxer over one of three water trays on course, then a dog leg turn under the stands to a double of 1.60m verticals at 7a and b. On the whole, riders judged it well.

There was no let-up, with a series of tricky distances bringing riders home across the third double on piste and with one final gamble for riders as to whether to choose four or five strides to the last, a tall, skinny set of planks.

Barely a fence separated those at the top of the table so the pressure to keep the poles up added an extra dimension to this intriguing competition, with time-faults proving pivotal as riders soared down the season’s home straight in this thrilling team championship.

Superb team-work from London Knights pushed them up into third in Saturday’s class. Ben Maher and MTF Madame X teamed up with Eduardo Menezes on the Poden Farms owned Galip, a horse borrowed from his Knights team-mate Emily Moffitt.

But it was the Mexico Amigos, fifth in the overall rankings ahead of this final leg, who clawed their way onto the coveted podium. Henrik Von Eckermann with Chacanno teamed up with his student and U25 rider Evelina Tovek with Castello in Thursday’s opener, but they substituted in their key player Christian Ahlmann with top stallion Taloubet Z for Saturday’s class, finishing on a team total of four faults.

Throughout the season, team tactics played an ever-increasing part. Squads switched riders and horses to suit particular circumstances at events to gain strategic advantage. Next year the third season of GCL is expected to see a surge in tactical play during the regular season to win through to the new GCL playoffs in Prague in December 2018.

Jan Tops, Co-Founder Global Champions League: “Starting in Mexico City it was a difficult Championship [to win]. [The fight] has been all the way to Doha, with many beautiful events in the middle. As a series, you wish and dream to have a scenario like this - the change between the leaders, and the battles; for example the Mexico Amigos who came from 5th to 3rd. It was so close between the Diamonds and United - at the end of the day this is what every series in every sport wants. That is what I am really proud of. The riders have been bringing their good horses to the League and they are taking this very seriously. I think and I feel that every year will be stronger and stronger. Next year strategy and tactics will come into play more and a great final in Doha, before the playoffs which will bring extra excitement as well."

Omar K. Al Mannai, Event Director AL SHAQAB: “I would like to thank you all for being here and I would like to thank and congratulate the stars who sit around me. I’m really proud today of [the event]. With the great team of LGCT we managed everything, our organisation has done a great job, thank you so much to everyone. Congratulations to the winners. And next year, Doha Fusan Qatar will be coming for you!”

Harrie Smolders, Hamburg Diamonds 1st place: “It’s a big team effort for the Diamonds. We already decided last year that we wanted to make the team better and we made some improvements. Eric and I finished the job here but it was an essential contribution from Audrey Coulter, Jos Verlooy and John Whitaker. Also because of Eurohorse, Axel Verlooy and Copernicus - with their support and their management behind us - they put us on the edge with a bit of pressure, but in a very good way, and that makes us be at our best. I see a big growth in potential for the Champions League. Of course Jan is a big visionary - he wants to let it grow a lot, he has new plans and of course we have to be stronger next year to win it again. We will definitely come back and we enjoy being a part of it - it makes our dreams come true."

Eric Lamaze, Hamburg Diamonds 1st place: “I came here with a little bit of an injury - every day seemed to be getting better but the first day was difficult for me. I was honoured in Florida when Axel Verlooy asked me to join the Hamburg Diamonds. I knew I wanted to take this seriously and try to bring my best horses to every event. And that’s what I did, it became my strategy. I came and tried to deliver my best performance at every event. The season was magical, the ones I did I was thrilled with, and took very seriously. I hope [to be a part of it in the future]."

Bertram Allen, Valkenswaard United, 2nd place: “We took each show one by one. We knew we had to start strong and achieved that. But we didn’t keep going as strong as we should have during the summer - we were a little too far behind coming here. We knew our only chance to get back up was to win, and we didn’t even know if that was going to enough! We did that, but in the end the Diamonds took it. It’s been a brilliant friendly rivalry and it’s enjoyable for us to be part of it."

Alberto Zorzi, Valkenswaard United, 2nd place: “Congratulations to Hamburg Diamonds for their victory. The season was very long - it started good in Mexico. We tried to fight until the end, we are second and we are happy."

Christian Ahlmann, Mexico Amigos, 3rd place: “We made everything possible today. Step by step we moved up the rankings, and today up to the podium. It was a very good day for us. A big thank you to all the owners and all the sponsors, to the staff all around. We had a hard season but a very good season and we are very, very happy."

Henrik von Eckermann, Mexico Amigos, 3rd place: “We were battling every time and it was a nice feeling today to end up third. We were third for a while, but then we lost it the second last time so we wanted it back, and it worked, which is why we came here. It was good."