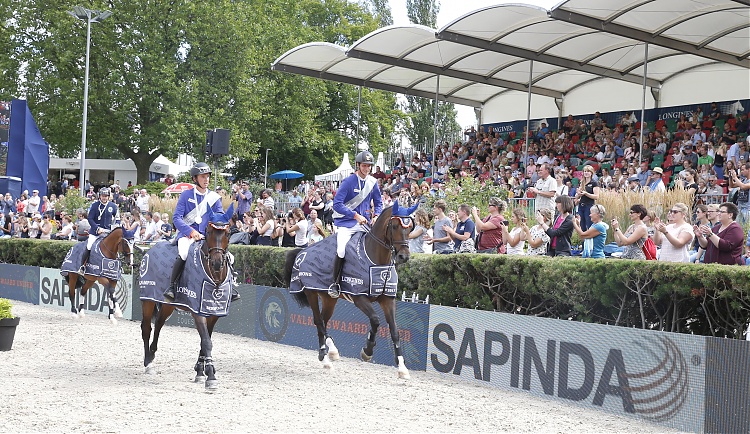 Valkenswaard United stormed to a blazing win at the Global Champions League of Berlin in a high wire showdown closing the gap on Hamburg Diamonds in the overall team title race.

Three teams started out in hot contention for today’s win. But, in early drama, Miami Glory’s Denis Lynch clocked up four faults dropping the squad out of contention from pole position. It was down to the two top-ranked teams to prove themselves in front of thousands of fans in the Sommergarten arena in Germany's power capital.

The 11th round of the Championship circuit saw Berlin join the glittering calendar of destinations and it proved to be a popular debut. Crowds packed the picturesque location, lining the grassy banks and filling the grandstands - the natural amphitheatre set up giving fans a perfect view of the arena.

The course was big all the way, with a galloping blind corner to finish. A tight turn back to an imposing wall featuring the Brandenburg Gate, and a treble combination featuring a gappy vertical in, and wide oxer out, threw in a few tests for the ride and horse combinations in the unusual oval-shaped sand arena.

Ludger Beerbaum of the Cannes Stars had the crowd on their feet with one of the early clears, after the four-time Olympic Gold Medallist put in a flawless round with Cordess. The crowd had plenty to cheer about after teammate and compatriot Marco Kutscher pulled out a class round with Clenur to keep the team clear in the second round. Ludger was quickly followed by Lorenzo de Luca of the Rome Gladiators who managed the hot chestnut Halifax van het Kluizebos beautifully to add another clear to the team’s tally.

Both Alberto Zorzi of Valkenswaard United and Eric Lamaze of the Hamburg Diamonds put in a clear round each, keeping their respective teams on a zero score, passing the baton back to their teammates and keeping the Championship race alive.

Drama came early on, after pole position riders Miami Glory picked up four faults when Denis Lynch and RMF Bella Baloubet agonisingly rolled a pole in the formidable oxer. Extra pressure would land on the ice cool shoulders of teammate Scott Brash and Hello Forever needing to keep a clean score to stay in with a chance of the podium.

Home city Berlin Lions treated the crowd to a sensational double clear after Max Kühner and Chardonnay 79, and U25 talent Anna Kellnerova and Classic put in a flawless effort. Sadly the faults carried through meant the team would not be on the podium today, but the crowd were delighted with their home city team performance.

Up and down the order every pole became costly, and after Ben Maher and Kent Farrington of the London Knights put in a stunning double clear the team shot up the scoreboard.

The crowd watched in anticipation as Jos Verlooy entered for the Hamburg Diamonds. A clear would mean a podium, but a pole down could cost them a chance of the win - worse still, the overall ranking should they drop too far down the order. Riding Igor quickly but carefully, Verlooy galloped to that last taking a tight angle at the final vertical. But it would prove costly, as the pole rolled, putting the team down on four faults.

All eyes would be on his friend and rival Bertram Allen of Valkenswaard United. A clear or fast four faults would secure the win and earn the team valuable ranking points, but the pressure was intense for the young Irish talent and his horse Izzy By Picobello. The crowd watched on as Allen delivered a masterful round, and the tension increased after the pair rolled a pole. But the combined time of Zorzi and Allen was enough to keep the team ahead of their closest rivals, securing the win and closing the gap to Hamburg Diamonds in the overall rankings.

The action and final placings would come down to the wire, as final rider to go Scott Brash and Hello Forever of Miami Glory had everything to do to keep the team on the podium, with only a fast clear to do. Watched on by teammates Georgina Bloomberg and Denis Lynch, the popular British rider flew around the arena, taking the course in his stride. But it wasn’t to be, as a pole down at the oxer would drop the team down to 8 faults, and agonisingly off the podium.

So it was the third win of the season for the blue and orange Valkenswaard United putting them tantalisingly close to regaining the Championship lead. The next round of action heads to the spectacular new destination of London, where the Royal Hospital Chelsea will be the backdrop for the 12th round of thrilling action in the battle for the title. ​

Marco Danese, Sporting Director Global Champions League: “It was fantastic day. We’re very happy with everything [here in Berlin]. It was top sport, and I have to say ‘as always'. A big thanks to all in the organisation, the team were very efficient and everything was great today. Today saw a big battle between the teams - now we have an open situation. All the events are counting for the League Championship and we have a lot of teams very close, so we’re looking forward to next week in London.”

Volker Wulff, President Global Jumping Berlin: “We didn’t expect such success for the first time. We had so many people here and the atmosphere was good. The organisation for the first year was great, we are trying a few new things and sitting together afterwards and we will see what we can do for the next year. But for the first time it was very good, and we’re happy to have an equestrian event like this in Berlin.”

Bertram Allen, Valkenswaard United: “It was just Alberto and I here out of the team, so it was always going to be the two of us. We were clear yesterday, so the pressure was on today to keep it up. I had four faults, but thankfully it was quite fast, so it was just enough to hold on to today."

Alberto Zorzi, Valkenswaard United, 1st place: “[Cornetto K] is amazing horse, he jumps so easily, he is class - I’m so happy and proud of our team. We did a good job.”

Jos Verlooy, Hamburg Diamonds, 2nd place: “It doesn’t happen so often that you give an Olympic champion [Lamaze] some tips! He was clear and did a great job these two days.”

Harrie Smolders, Hamburg Diamonds, 2nd place: “The Diamonds did a good job again this week - Eric double clear and Jos a good job with clear and four. At the moment we’re still on top on the leaderboard, and hopefully we can keep this to the end. We’re having a good battle with Valkenswaard United, we’re very close, so it will be a nice battle to the end.”

Ben Maher, London Knights, 3rd place: “We’ve had a lot of clear rounds as a team, but have struggled to put them together at the right time! I wasn’t expecting to be on the podium today, but we jumped two clear rounds from myself and Kent to get us in a good position, and in the standings we’re in with a shout for the final at the end [of the season]. The experience of the riders on our team helped, we have the Number 1 in the World on our team for a reason. My horse Don Vito has been very successful for the team, he’s still young. We also use Emily Moffitt a lot - she’s the youngest on the whole Tour I think. These are big jumps and she’s had to learn fast, it’s the idea of this League to keep younger riders and try to bring them on in the sport.”