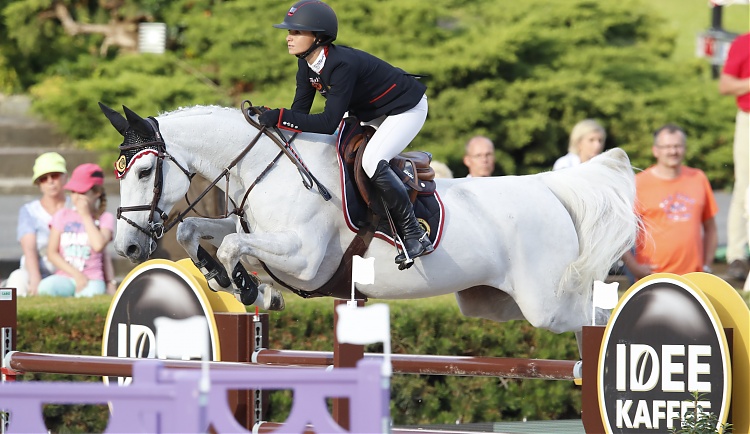 Tomorrow’s final of the Global Champions League, making its debut in Germany’s dynamic capital city of Berlin, is set for a high-powered showdown after thrilling team combat on day one.

Miami Glory and the formidable duo of Denis Lynch and Georgina Bloomberg clinched the top spot - their third pole position in the 2017 season - in the first round in dazzling split-second fashion. At the end of the competition the three top teams all finished with clean score sheets and were separated by just seconds on time alone.

Adding to the drama there are now nine teams on four faults, all within a whisker of each other. With the top teams right at the sharp end of the grid, there a strong chance of upset in the overall championship ranking after the 11th leg of the season.

Berlin is featuring on the calendar of the GCL and the Longines Global Champions Tour for the first time and the natural amphitheatre at the Sommergarten show ground offered prime views to fans keen to witness top sport on a major global city stage.

Jessica Springsteen of Shanghai Swans delivered one of the the first faultless rounds with Cynar V, watched on by team mate Daniel Deusser. The cool German kept his head during his own round, and despite a heart-stopping rub at the first, managed to complete the course with just one down on Clintop, putting the team in 8th overall.

Denis Lynch and RMF Bella Baloubet laid the groundwork for Miami Glory, putting in a stunning and fast clear. Teammate Georgina Bloomberg had all the pressure to deliver another clear for the team, but managed her grey mare Manodie beautifully, flawless to the last and shooting the team up to pole for the third time this season.

After a final team tactical talk between Hamburg Diamonds’ Jos Verlooy and Eric Lamaze - who ran through the course together before Lamaze entered the ring - the top Canadian rider pulled off a phenomenal clear with Chacco Kid, the bay horse powering around the arena, clearing the fences with plenty of scope. U25 rider Verlooy took the pressure in his stride, putting in a superb performance with Igor to keep the team on a clear score.

Valkenswaard United proved to be a force to reckon with, despite star striker Bertram Allen nursing a bruised wrist from an earlier fall. Both Allen and Zorzi put in flawless rounds with their horses Izzy By Picobello and Cornetto K, shooting them up to second in today’s result and keeping the fight for the Championship wide open.

Four faults proved costly with 9 of the teams separated on just tenths of a second. Agonisingly Bassem Hassan Mohammed of Doha Fursan Qatar had the final fence down, dropping the team right down the order to 11th despite Sheikh Ali Bin Khalid Al Thani’s clear with First Devision. Christian Ahlmann of the Mexico Amigos rode a magic clear with the popular stallion Colorit, but it wasn’t enough for the team, who would finish the day in 7th after an unlucky rub and four faults from Henrik von Eckermann and Mary Lou.

Danielle Goldstein of the Monaco Aces with Lizziemary, Simon Delestre and Chadino of St Tropez Pirates, Leopold van Asten and VDL Groep Miss Untouchable of Madrid in Motion, Kamal Abdullah Bahamdan with Lacasino of the Moscow Bears, and Lillie Keenan with Super Sox of the Paris Panthers all put in strong clears for their teams, however one fence down from their teammates meant they would miss out on the top three positions. Further clears from Marco Kutscher and Clenur of the Cannes Stars, Sergio Alvarez Moya and G&C Unicstar de l’Aumone of the Chantilly Pegasus and Ben Maher with Tic Tac of the London Knights were also lost in the order after fences from their teammates dropped them down the order to the bottom of today’s results.

With overall GCL ranking leaders Hamburg Diamonds and Valkenswaard United through to tomorrow’s final on a clean score, the battle is on for maximum ranking points and dominance of the championship leaderboard.