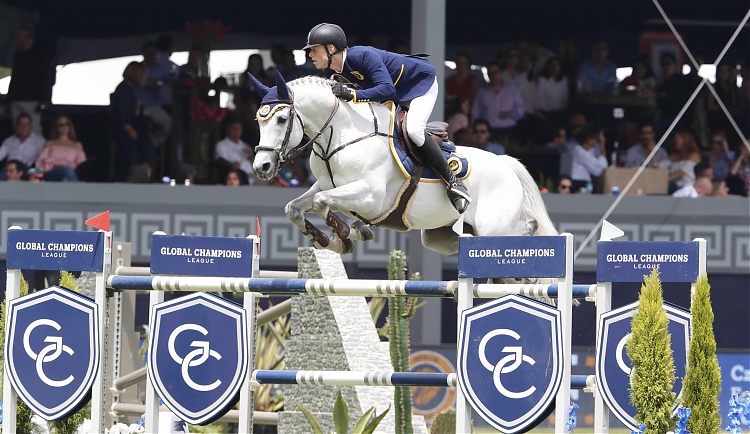 Heavyweights out in force for power-packed GCL Berlin

As the fight for the Global Champions League title intensifies, 18 teams will be fielding heavy-weight combinations for what promises to be a thrilling 11th leg of the Championship race. With the powerhouse city of Berlin debuting on the series’ calendar, all eyes will be on which riders will take centre stage for this leg of the exhilarating team competition.

The dynamic Championship battle has seen several shake ups in the order, with the top three positions constantly changing in dramatic fashion as teams fight tooth and nail for every valuable point. Currently heading up the pack are the Hamburg Diamonds who are hoping to pull clear with their tally of 196 points overall. This weekend will see Eric Lamaze and Jos Verlooy come off the bench for the first round of action, with team anchor Harrie Smolders in the wings for Saturday’s final.

Breathing down their necks are reigning champions Valkenswaard United who have brought out their heavyweight players Bertram Allen and Alberto Zorzi. On 183 points, the blue and yellow team are poised for another strong result, as they also keep one eye on the team closest behind, the Mexico Amigos. It’s clear the battle for the Championship has intensified, as the Amigos bring out the big guns with Christian Ahlmann and Henrik von Eckermann keen to make a dent on their 11 points difference to 2nd place Valkenswaard United.

The 11th round of action on the new season calendar sees the prestigious city make its debut on the circuit adding another dynamic capital city and a chance for new fans to experience top-level show jumping and the new era of team competition in a city centre venue. The German capital is also the largest city in the country, steeped in history with famous monuments including the Berlin Wall and the Brandenburg Gate. Berlin’s vibrant cultural scene makes it one of the most visited cities in the world. Home City team Berlin Lions will field Max Kühner alongside U25 talent Anna Kellnerova, while there will be plenty for locals to cheer about as Cascais Charms will feature popular German riders Andreas Kreuzer and David Will.

Following the draw today, Cannes Stars drew the short straw, with another all-German line-up of Marco Kutscher and Christian Kukuk the first to take to the new arena. At the opposite end of the starting order, Vienna Eagles, with their formidable duo of Niels Bruynseels and Gregory Wathelet will be the final team to start, with the advantage of being able to watch the other world-class riders tackle the course.

The Sommergarten at the Funkturm in Berlin is a centrally located, park-like green area on the grounds of the Messe Berlin. Approximately 10,000 square meters in size, the garden was originally created in the heart of the capital as a place of relaxation and peace, providing a unique ambience. Since 1981 the Sommergarten houses a sculpture garden with works by contemporary Berlin artists.

Following the transfer window period, Chantilly Pegasus will field new recruit Karen Polle alongside Sergio Alvarez Moya. Rome Gladiators will bring out heavy-weight pairing of Lorenzo de Luca and Olivier Philippaerts, with the boys in green looking to help the team shoot up the grid. Team anchor Simon Delestre will be back in action for the St Tropez Pirates, this time alongside local young star and U25 rider Laura Klaphake, while the London Knights will see an all-British line up with Ben Maher and U25 talent Emily Moffitt taking to the arena. Miami Glory will be coming out strong with Denis Lynch and Georgina Bloomberg lining up for the first round of action, and the Shanghai Swans will see the formidable duo of Daniel Deusser and Jessica Springsteen take centre stage for the team this weekend.