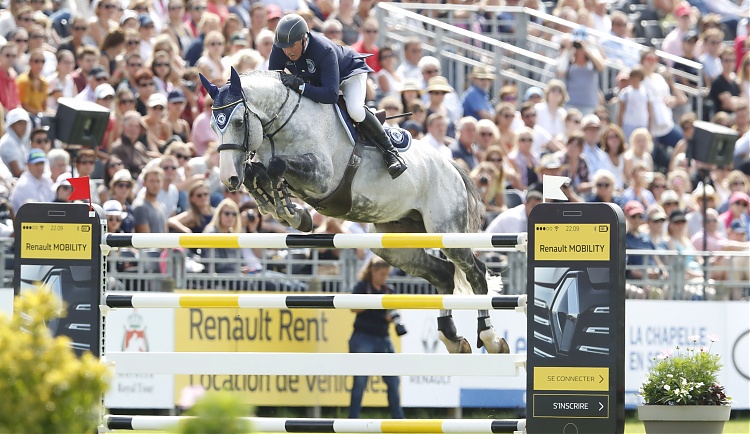 Hamburg Diamonds delivered a masterclass in grace under pressure, after a sensational win from Harrie Smolders and John Whitaker saw the team shoot to the top of the overall Global Champions League rankings.

The rock solid duo had the packed grandstand on the edge of their seats as it all came down to the wire, with Whitaker the final rider to go in the class, and the decider of the competition. Converting their pole into a win meant that the Diamonds have made a break away from the rest of the field, with 196 points overall, 13 points ahead of long-term leaders Valkenswaard United who sit on 183 points. Mexico Amigos have shot up to third overall, a further 11 points away on 172 overall.

As the sun blazed down, the top teams took centre stage in the lush grass arena, watched over by the iconic Chateau de Chantilly and set against the beautiful grand stables. Uliano Vezzani delivered an artful course design, with a clever layout using the full width and breadth of the galloping grass arena. A true test for the world’s best riders, the course required delicacy, with short distances constantly keeping the horses and riders on the back foot. The layout featured a holding seven strides to the treble combination, tough for a speed class course, as well as a wide white Longines plank situated alongside the packed grandstand, before a formidable Global Champions League oxer to finish.

The very first fence took out a few, including experienced duo Ludger Beerbaum of the Cannes Stars and top stallion Chaman. Miami Glory’s Paris Sellon had a rub of the first, but picked up four faults at the final part of the treble combination, putting the pressure back on the shoulders of teammate Scott Brash to jump clear and keep the team in the mix for a podium.

Although the course was challenging, clears came from across the field, with Jessica Springsteen (Shanghai Swans) and Cynar, Sheikh Ali Bin Khalid Al Thani (Doha Fursan Qatar) with First Devision, Christian Ahlmann (Mexico Amigos) of Codex One, home team rider Sergio Alvarez Moya (Chantilly Pegasus) with Charmeur, Gregory Wathelet (Vienna Eagles) with Coree and Simon Delestre (St Tropez Pirates) with Chadino all putting their teammates in the spotlight to try shake up the final result.
Home team rider Lauren Hough of the Chantilly Pegasus couldn’t match teammate Moya’s clear, with the leading American rider picking up an unusual 12 faults from all around the field. Overall ranking drama kicked off, as leaders Valkenswaard United were ruled out of the podium position after anchor Marcus Ehning picked up eight faults with the speedy Comme il Faut, and St Tropez Pirates Jérôme Guery with Alicante also collected faults, keeping the team out of the running, and missing out on valuable ranking points.

The crowd cheered as home hero Roger-Yves Bost of the Shanghai Swans leapt clear, with teammate Springsteen nervously watching on following her spectacular clear earlier in the class. But it wasn’t enough to put the team on the podium, with the pair finishing in 4th overall. World Number 1 Kent Farrington of the London Knights set off at a blistering pace with grey gelding Dublin, but it proved costly, with the duo collecting eight faults and dropping the red, white and blue team down the order.

Leading team Hamburg Diamonds stuck with their rock steady combination, bringing out star-striker Harrie Smolders, with the impressive Emerald N.O.P. raring to go in the expansive grass arena. The pressure was on for the leading Dutchman to help convert the team pole into a podium position, and Smolders kept his cool in the soaring temperatures to deliver a foot-perfect round, jumping clear and keeping the team in with a shot of the win.

He would have a nervous wait as the rest of the field played out their rounds, before the legendary John Whitaker would return to the ring with his nine year old dapple grey stallion Cassinis Chaplin - the final rider to go in what’s become a nail-biter of a competition.

Nearest rivals Miami Glory pulled out all the stops with Scott Brash, with the star rider putting in a phenomenal round with the fiery Hello Forever. Quickest of the whole field, the British Olympic gold medalist wowed the crowd, managing the hot gelding beautifully, and keeping the team on four faults to hold onto a podium position.

All eyes turned to John Whitaker, with the experienced rider knowing he had to go clear, or with one fence down and faster than Miami Glory’s combined time to stay in the lead. Silence fell as the packed grandstands watched on, the popular rider commanding the arena with his striking grey stallion. Setting off at a steady pace, it was clear that clean and slow was the strategy for the team. As Smolders watched on nervously from the kiss n’ cry, Whitaker delivered a masterclass in grace under pressure, riding Cassinis Chaplin beautifully to finish on just one time fault.

So the lead would go to the Diamonds, who shot to the top of the overall rankings. Miami Glory settled for a strong second, and Doha Fursan Qatar took home the final podium place. The League now looks to Berlin, a new destination on the calendar, as the battle for the overall championship continues.