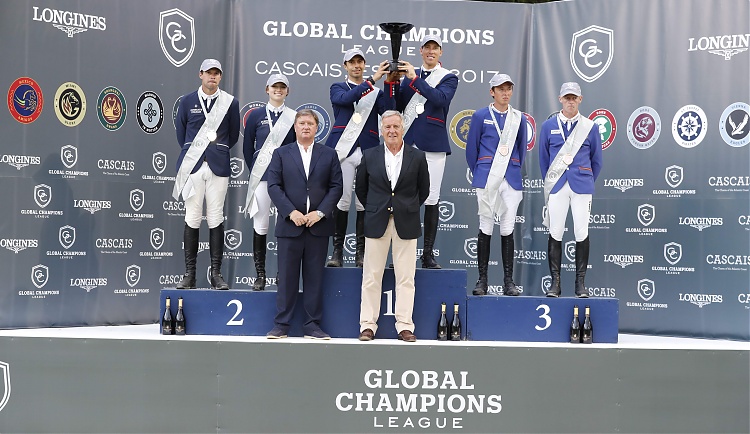 Valkenswaard United took over the Global Champions League ranking lead in Cascais tonight after winners Miami Glory were disqualified due to an FEI ruling.

Second place team Mexico Amigos, helped by a double clear from Henrik von Eckermann, were declared the winners with Paris Panthers’ Jack Towell and Lillie Keenan in second place on the podium and Valkenswaard United’s duo of Marcus Ehning and Bertram Allen in third.

Miami Glory’s Scott Brash and Hello Forever had produced a spectacular winning round building on the team’s impressive clean score sheet from the first round. But the FEI disqualified Scott due to a trace of blood on his horse. It was emphasised last night the horse is unharmed. GCL Co-Founder Jan Tops reflected the opinion of other riders saying it is well known how much Scott cares for his horses and adding: “It is a rule the FEI have to change.”

Leg 9 of the GCL series itself threw up a series of tests of strategy for the squads with several teams opting to switch riders and horses to try and maximise their score. Four teams started on zero scores in Round 2: Miami Glory, Rome Gladiators, Paris Panthers and Doha Fursan Qatar.

Paris Panthers’ Under-25 rider Lillie Keenan and Skyhorse ended on four faults as did team compatriot Jack Hardin Towell who had a surprise early fence down to finish on a total of 8 for the night.

Rome Gladiators soon lost their advantage when Marlon Zanotelli had an oxer down for four faults and their woes were compounded when Abdel Said had trouble at fence 10 and eventually clocked up 8 faults. Despite their total team tally of 12 penalties they finished in 4th place.

Valkenswaard United started Round 2 on only four faults but there was a further upset when Marcus Ehning and Funky Fred had faults at the first two parts of the Longines triple combination leaving the team on a total of 12 and ending in 3rd place.

Doha Fursan Qatar had the advantage of a zero score to start their second round but Sheikh Ali Al Thani had a disappointing upset at fence four demolishing all the poles and ending on 9 faults. Five faults for team mate Bassem Hassan Mohammed left the team in 5th place on the night.

Hamburg Diamonds’ Harrie Smolders polished off two superb clear rounds on Capital Colorado but team mate Jos Verlooy was unable to match him and the team finished 6th on 16 faults.
There were ups and downs for other teams with Sergio Alvarez Moya of Chantilly Pegasus jumping a stunning clear on Carlo but suffering from his earlier 20 faults in Round 1.

Home team Cascais Charms received a fantastic cheer from the local crowd waving team fans in support. But their total of 20 faults left them down the ranking with Cannes Stars and Madrid In Motion.

St Tropez Pirates had gone into the League competition in Cascais as ranking leaders, but fell foul of the challenges on the sweeping grass arena. Both Julien Epaillard and Simon Delestre clocked up a hefty number of uncharacteristic faults putting them out of the running.

Shanghai Swans, Monaco Aces and London Knights were eliminated in the previous round, but it was also a bad night for Berlin Lions.

After the Cacais leg the overall League ranking is tight at the top with Valkenswaard United on 170 points, Hamburg Diamonds hot on their heels on 166 points and St Tropez Pirates close behind on 160.

GCL now heads to Chantilly, France, next weekend for the 10th leg of the series when there could be a shake up in the teams due to a mid season transfer window when riders can change squads.

Jan Tops, Co-Founder Global Champions League: “It’s an amazing setting. I came here 13 years ago before we started the Tour, I fell in love with the place. Duarte is one of our greatest supporters over the last years and he’s outdoing himself every year. In the League it's getting closer and closer together which is fantastic to see. It was a shame this evening, for what happened with Scott. It’s a rule, but it’s a rule the FEI have to change. I know how much Scott looks after his horses, how great he is with his team of horses, and he didn’t deserve that at all. It’s a rule but I think these things have to change.”

Duarte Nobre Guedes, President LGCT Cascais: “I’m very proud and happy to host this event. We started a dream 13 years ago, now it’s real. Knowing Jan I think it’s not finished yet, we have some more ‘oxers’ to jump but it’s great for me to host this event. People are starting to understand how important this event is.”

Henrik von Eckermann, Mexico Amigos 1st place: “It was a good start. We are happy, we are closing on the others - next week is Chantilly, with main man Christian also in the team, so we’re trying to chase the others.”

Hardin Towel, Paris Panthers 2nd place: “We had a good week this week - Lillie and I put in good rounds yesterday. I maybe went a little quick in the jump off as my horse was a little flat today and didn’t jump as well. Lillie had an unlucky rail, but we’re happy enough to be second.”

Lillie Keenan, Paris Panthers 2nd place: “I’m very lucky that I have three top horses that I can really pick and choose. Fibonacci was phenomenal yesterday, and Skyhorse did his job I just made a small mistake. But to be on a team with Hardin, and our full team, it’s amazing. It’s my first year jumping the League and I’m very grateful for the opportunity.

Marcus Ehning, Valkenswaard United 3rd place: “Bertram was better than me today. I missed the triple, it was a shame but I think we are strong enough. We have the leaderboard back, and we don’t want to give it away.”

Bertram Allen, Valkenswaard United 3rd place: “We had a few fences down today but we finished up third so we’re still at the races. It’s important to keep consistent, and have good results. It’s another good score, so we’ll keep having to go to the end. Marcus and Alberto will be in Chantilly and then we’ll have a look [at the rest of the season]."