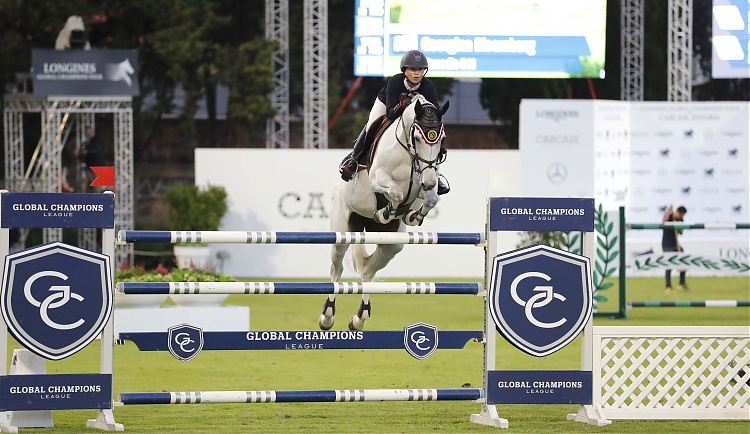 It was a night of high drama as the first round of the Global Champions League Cascais kicked off in the spectacular Portuguese setting. Thrills, spills and top class sport kept spectators on the edge of their seats, but it would be the Miami team who blazed to Glory in tonight’s competition, after Georgina Bloomberg and Cian O’Connor put in a flawless round to rocket them to the top of the leaderboard.

Frank Rothenberger set a fair track with good distances, and some delicate fences meaning riders would have to keep a check on their horses in the galloping grass arena. There would be a few outside elements that affected the competition, as the sun set and the lights came on, with shadows lengthening and darkening as the competition unfolded.

First rider to go - and the team to draw the short straw in yesterday's draw - was Julien Epaillard of the St Tropez Pirates. The weight of expectation heavy on the Frenchman’s shoulders, the tough track took it’s toll, with last weekend’s Longines Global Champions Tour Grand Prix of Paris winner picking up an unusual 12 faults with Quatrin de la Roque LM. Ales Opatrny of the Berlin Lions also put the team out of contention, after VDL Fakir threw a shoe knocking the eye-catching grey off balance.

.
Pilar Lucrecia Cordon of the Monaco Aces had a shock exit with Cana van de Blom, after a last minute stop at the formidable Longines oxer away from the in-gate caused Pilar to loose her seat. Landing on her feet, Pilar immediately leapt back on, however the fall meant the team would be eliminated from progressing to Saturday’s final.

Clears came from many of the first riders for the teams, with Marcus Ehning (Valkenswaard United), Sheikh Ali Bin Khalid Al Thani (Doha Fursan Qatar), Jack Hardin Towell (Paris Panthers), Marco Kutscher (Cannes Stars), Marlon Zanotelli (Rome Gladiators), and Roger-Yves Bost (Shanghai Swans) all jumping clear. Georgina Bloomberg of Miami Glory put in a stunning round with Monodie H, the pair flying around the grass arena and the grey mare jumping the course confidently despite this being her first experience under evening conditions.

As the spotlights came on, Simon Delestre of St Tropez Pirates pulled back the team’s chances, with a clear on Chadino, keeping the team in the mix for tomorrow’s final. Abdel Saïd of the Rome Gladiators was the first to create a team double clear, with the Egyptian rider looking on fine form following his win earlier in the day, this time jumping clear on the eight year old Jackson de Regor. The crowd cheered as U25 rider Lillie Keenan of the Paris Panthers secured another team double clear with her athletic grey gelding Fibonacci, with the pair a touch quicker so slotting in above the Rome Gladiators.

Bassem Hassan Mohammed of the Doha Fursan Qatar had to work hard with Tamira IV, adding a stride at the double, but jumping clear to keep the team completely clear. An unusual double refusal for the London Knights also saw them eliminated, and out of contention for tomorrow’s final. Shanghai Swans followed suit, with the same combination catching out the high flying team.

Harrie Smolders of the Hamburg Diamonds had plenty to do after U25 rider Jos Verlooy picked up 12 faults earlier in the competition. Riding teammate Audrey Coulter’s Capital Colnardo, the flying Dutchman went clear, keeping the Diamonds in half a shot of staying at the sharp end of the overall rankings.

All eyes turned to Bertram Allen of Valkenswaard United with Molly Malone, as the reigning champions took centre stage. A clear from teammate Ehning meant a strong result from Allen would help the team in their mission to regain the lead, with the pressure on the top Irish rider to come through. An unlucky rub of a pole meant they would finish on the four, but still in the running with the leading teams down the order.

From one Irishman to another, the pressure was on Cian O’Connor of Miami Glory, as he made his debut for the team. With Super Sox jumping his heart out, and Georgina cheering from the kiss n’ cry the pair flew clear, shooting the team up to the top of today’s results and in pole position for tomorrow’s GCL final.

Tactics, strategy and team talk will come into play, as all focus will go on deciding which combination to field for Saturday’s final. All the action kicks off at 18:00 local time, with the competition streamed live via GCL TV, featuring behind the scenes content, exclusive interviews and expert analysis and commentary.