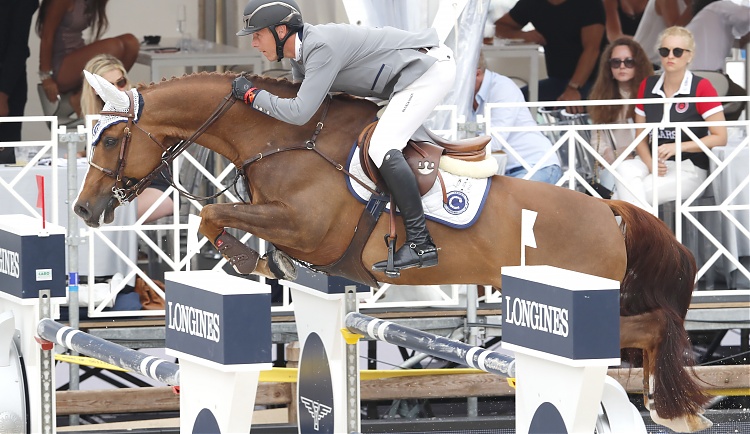 All eyes are on Cascais, Estoril for the 9th round of the Global Champions League, as the fight for supremacy rockets skywards. The fight for the top could not be closer, with the world’s best teams and riders heading to the sunny Portuguese destination to battle it out under the floodlights.

With just four points separating the top three teams, and with every point counting towards the overall Championship, first round riders have been carefully selected to try put the teams in the strongest position possible for Saturday’s Cascais final. Current leaders St Tropez Pirates will bring out star striker Simon Delestre, this time teaming up with Julien Epaillard - who, fresh from his Longines Global Champions Tour Grand Prix of Paris win, will be looking to capitalise on his recent run of success. With 152 points overall, the team will be looking to extend their lead as the Championship heads towards the second half of the season.

Just two points away are the Hamburg Diamonds, who will again bring out the heavy-weights with Harrie Smolders and Jos Verlooy up front for the team this weekend. A mere one point away on 149 overall are long-term leaders Valkenswaard United, with the formidable duo of Bertram Allen and Marcus Ehning taking over the reins for the first round in Cascais.

Ones to watch will be Miami Glory, as Cian O’Connor makes his debut on the Championship. The top Irish rider will be teaming up with Georgina Bloomberg for this leg of the season, with the team in 6th overall. Home team Cascais Charms will see friends Andreas Kreuzer and David Will re-unite for the first round of action in Portugal, with the pair looking for support from the home crowd in an extra boost tomorrow. Another formidable combination will be Chantilly Pegasus’ Martin Fuchs and Sergio Alvarez Moya - a new combination, but one that promises plenty of potential to help the Pegasus team secure a strong standing for Saturday’s final.

Cascais has grown into a renowned international destination for world-class sport, hosting the America’s Cup sailing, golf, tennis, surfing and motorsports. With it's warm climate, visitors flock to the coast to soak up the sun and enjoy the great landscape and attractions, including the beautiful sandy bay of Praia de Tamariz. The stunning grass arena is a favourite with many riders, and the horses visibly enjoy jumping in the picturesque location.

The London Knights will field a strong pairing in Ben Maher and Emily Moffitt, with the team within grasping distance of the top three positions. Fighting hard to keep them below will be the Mexico Amigos, currently in fourth, who will try out a new pairing in Henrik von Eckermann and Yuri Mansur Guerios. Doha Fursan Qatar will continue to play their ‘consistency’ card, with Sheikh Ali Bin Khalid Al Thani and Bassem Hassan Mohammed back in action for the team, while Shanghai Swans will stick with successful combo, Roger-Yves Bost and U25 rider Alexandra Thornton.

Cannes Stars will see Jane Richard Philips team up with Marco Kutscher for the first time this season, and Monaco Aces will also try out a new combination with Danielle Goldstein and Pilar Lucrecia Cordon. It will be an all-American line up for the Paris Panthers as Jack Hardin Towell unites with Lillie Keenan for tomorrow’s competition, and Marlon Zanotelli will join forces with Abdel Saïd for the Rome Gladiators.
Gregory Wathelet makes his return to the Vienna Eagles, this time alongside Emanuele Andrade, while Ramzy Al Duhami and Kamal Bahamdan will team up for the Moscow Bears. The Berlin Lions will welcome the return of Max Kuhner, who joins forces with Ales Opatrny, and Madrid in Motion will bring out heavy-weights Maikel van der Vleuten and U25 rider Gonzalo Anon Suarez.

All the action will be streamed live via GCL TV, featuring exclusive content and expert commentary. Tune in at 20:00 local time to watch all the action as it unfolds, and to see who will be in pole position for Saturday’s GCL Cascais final.