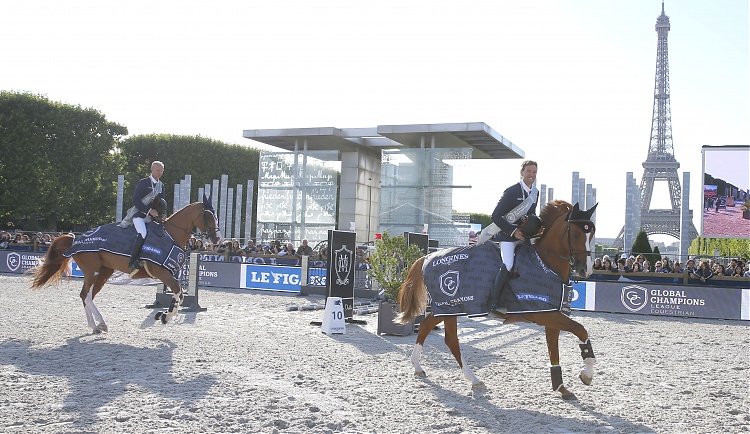 A high-drama final of the Global Champions League in Paris has triggered a major shake up of the leaderboard with the the top three teams separated by only three points.

As the skies cleared over the Eiffel Tower following torrential rain, it was St Tropez Pirates who kept their cool to finally convert the pole position into a win, with Simon Delestre and Jerome Guery securing a magnificent victory. With their powerful result today, the Pirates leap to the top of the overall rankings, where they now sit on 152 points - knocking long-term leaders Valkenswaard United off the top spot.

Hamburg Diamond’s podium position today keeps them in second overall on 150 points, with Valkenswaard United just one point behind on 149. With every point counting, the second half of the season looks to be a high stakes race to the finish.

All eyes were on the team line up as tactical changes came into play, with overall leaders Valkenswaard United swapping in top German rider Marcus Ehning for Bertram Allen, keeping Alberto Zorzi as the team anchor with his clear rate currently at 69%. Miami Glory also played their star striker, as Scott Brash stepped up for the team, as did London Knights who put Ben Maher forward for the crucial second round.
Strategies also came into the mix with many of the teams opting to change horses for the Paris GCL final. Notably St Tropez Pirates leader Simon Delestre changed horses, swapping in Hermes Ryan for Chesall, as did French hero Roger-Yves Bost who brought out Pegase du Murier for the crucial final round.

‘Delicacy’ was in fact the word of the weekend, as Uliano Vezzani’s winding course made full use of the sand arena, double the size from last weekend’s tight Monaco circuit. The course featured three doubles and no combination, with Vezzani encouraging riders to gallop before balancing their horses for tight turns and full height verticals. The unforgiving planks caught out a few, with the lightest of touches causing the fence to fall. But poles fell all around, with the first fence causing a few surprises as the teams fought to keep their combined scores low.

Vienna Eagles tumbled right down the order, showing how quickly tables can turn on the League following their soaring win in Monaco. A troublesome weekend for Emanuel Andrade and Ricore Courcelle saw them out of the running, dropping like a stone down the overall rankings, despite Niels Bruynseels and Gancia de Muze perfect clear.

There was further drama after Anna Kellnerova of the Berlin Lions had a double refusal with Calcourt Falklund, as did Mathilda Karlsson of the Moscow Bears who’s AD Quantina took exception to the grey gate positioned next to the packed grandstand. The eliminations meant both teams were out of the running, dropping them right down the order and way out of contention. Jack Hardin Towell  of the Paris Panthers took an unusual tumble, after Lucifer V stopped at the last minute at the tricky gate, ruling the home team out of the podium potential.

First to go clear was Mexico Amigos U25 rider Evelina Tovek, who put in yet another phenomenal round with her dapple grey Castello 194, smoothly cruising the course. But their steady pace cost them, with the young Swedish rider picking up a time fault. The team were looking strong for a podium despite further faults from teammate Christian Ahlmann and Caribis Z.

Simon Delestre was the first to go through on a completely lean score, riding Hermes Ryan beautifully around the tricky course for the St Tropez Pirates. The pair rolled back superbly to the Arc de Triumph wall, and the crowd erupted as they galloped across the line with another faultless round. The pressure was back on the shoulders of teammate and best friend Jerome Guery, who would be the final rider to go, keeping the suspense right down to the wire.

Ben Maher of the London Knights put in a foot perfect clear with Don Vito, but it wasn’t enough for the team, who fell short of the podium today. Chantilly Pegasus’ Lauren Hough put in an almost perfect round with Waterford - clear with one time fault - which was then bettered by teammate Sergio Alvarez Moya with G & C Arrayan who jumped clear to propel the team into a podium position.

Valkenswaard United rider Alberto Zorzi had all the pressure, knowing he had to go clear and fast to keep hold of the podium. An earlier eight faults from Marcus Ehning meant he had everything to do, with the top Italian rider putting in a strong round. But it wasn’t to be, after an unfortunate pole went the team tumbled off the podium and down the overall rankings.

Audrey Coulter put in a strong try with Capital Colnardo, picking up just four faults to add to their former score of 1. Teammate and top Dutch rider Harrie Smolders had to ride clear to keep the Diamonds in with a chance, with top stallion Don VHP Z his partner in the high pressure round. The pair collected an unfortunate four faults, putting the team on a score of 9 overall and into second on the podium today.

And so it came down to the final rider to enter the ring. The crowd clapped along as Jerome Guery and Grand Cru van de Rozenberg entered to the team’s theme music, holding their breath as the wall-eyed chestnut set off at a gallop. The pair looked strong, until the pressure became a touch too much. Two poles down put the team scarily close to losing the win, but a quick pace meant they kept it clean, stopping the clock ahead of the time allowed and keeping the Pirates in the lead.

The GCL now looks to Cascais, Estoril, where the 9th leg of the Championship will take place under the evening lights.

Jan Tops, Co-Founder of the Global Champions League: “We had the most fantastic ambience. One of the best of the season. Uliano did a great job again. It was not easy, but when it’s not easy great things happen. I saw everyone getting faults and that changed the leaderboard. At the moment the St Tropez Pirates are very strong and it was the perfect day for them. The Diamonds are doing great. The whole competition for the whole year is so open, and that’s what every series dreams of – that there is tension until the end. That no one is guaranteed for the win – it’s fantastic.”

Simon Delestre, St Tropez Pirates 1st place: “Fortunately we do our best. We fight every weekend, we are really enjoying being in a team with Jérome and now Ryan is back at his best event which gives off a little bit more power. We are fighting every weekend and will continue to fight.”

Jerome Guery, St Tropez Pirates 1st place: “I had a lot of pressure on me because we wanted to win here in Paris. I knew that I could do two faults but I wanted to do a good round and after my first fault I had even more pressure. I made a really big mistake on my last one and my horse jumped very well but I felt the pressure. But it was enough to win. That’s good, your emotions add to the atmosphere.”

Audrey Coulter, Hamburg Diamonds 2nd place: “It was very close. We were really happy with how our horses jumped and it came down to the end but we’re really focused on consistency this season so we’re very happy with our result. My horse jumped really well and we’ve finished second three times now so hopefully we’re knocking on the door of winning.”

Harrie Smolders, Hamburg Diamonds 2nd Place: “I am feeling very, very proud of Don. He had another fantastic weekend and a great performance. We’re just over halfway through the season and it’s not easy to manage to get everywhere with a good team. I think you can see the top teams – they can manage it, but you will need to have horse power because every result is counting to the whole season.”

Sergio Alvarez Moya, Chantilly Pegasus 3rd place:  “The mare I rode yesterday is only nine and I find it a little hard for her to do two days in a row. Arrayan has a bit more experience and plenty of energy so we can do two rounds in the same day.”

Lauren Hough, Chantilly Pegasus 3rd place: “I didn’t take every risk today. My horse isn’t the fastest so I rode for safety and ended with a time fault. Sergio pulled through and we ended up on the podium so it was a good day for us. I believe we’ll be competing together again in Chantilly.”