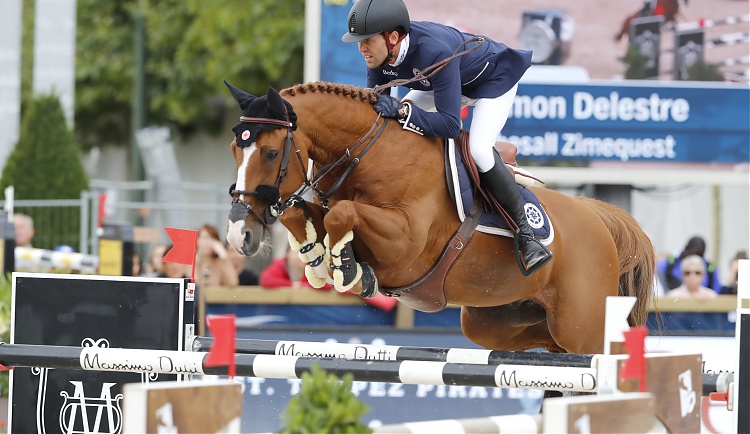 It was a showcase of high-octane sport for Round 1 of the Global Champions League of Paris, with the 8th leg of the team Championship kicking off in style in the shadow of the iconic Eiffel Tower.

St Tropez Pirates duo of Simon Delestre and Jerome Guery took their third consecutive pole of the season, putting them in the best position for Saturday's Paris final. Underlining the importance of the GCL final, Jerome revealed he would elect to withdraw from today’s 62,000 euro individual jump off, saving his horse for tomorrow’s competition. Speaking live on GCL TV he said: “I'll keep my horse fresh for tomorrow” with Simon adding that although they were in a “good position”, the results “would count tomorrow.”

Hamburg Diamonds’ Harrie Smolders and Audrey Coulter put themselves on the front row of the grid, with a strong second today, and the Monaco Aces pairing of Danielle Goldstein and Pieter Devos pulled it out of the hat to take third today, with the duo the fastest of all the teams despite their four faults.

Celebrities and VIPs watched on from luxurious surroundings, including Bruce and Patti Springsteen who watched on as daughter Jessica competed in the show. Talking earlier about the picturesque setting, competitor Ariana Rockefeller set the scene: “It’s incredible, I love being here - what a beautiful venue to have a horseshow. We did Miami, now Paris and then we’ll go to London and Rome. The combination of the beautiful settings, the incredible hospitality and the opportunity to watch the best riders in the world over one weekend is amazing.”

Clea Newman, daughter of the late Hollywood movie legend Paul Newman, praised the incredible event next to the Eiffel Tower. Clea, who is an Ambassador for her father’s foundation for children, SeriousFun Children’s Network, said: “It doesn’t get much better than this. I’m very jealous of all my friends who are showing right now!” She was at the LGCT - LPEJ in Paris to present the prizes for the special L’Envol competition - the European arm of her families’ charity, created to provide fun experiences for children with serious illnesses.

Uliano Vezzani set a thought-prevoking course, with riders given options and challenges around the arena. The time allowed of 84 seconds caused a few problems, with many such as Eric van der Vleuten of Madrid in Motion picking up painful faults - all of which could prove influential in the final result.

‘Delicacy’ was the word of the day, with the double combination tripping up a few of the top team riders. A light, full-height vertical at the end caught out a few such as Laura Kraut and Confu of the Rome Gladiators, and Cascais Charms’ U25 rider Philip Houston and Loewenherz. Paris Panthers Darragh Kenny had the back rail of the oxer, before taking out another pole to collect 8 faults for the home team. Teammate Jack Hardin Towell agonisingly had the first fence down with Emilie de Diamant A S, but the pair recovered quickly to finish the rest of the round clear, despite becoming another combination to pick up a time fault.

First to go clear was the popular home hero Simon Delestre of the St Tropez Pirates, with Delestre’s chestnut gelding Chesall taking the course in his stride. Jérôme Guery (BEL) carried the weight of his teammate’s clear on his shoulders, entering the ring with top horse Grand Cru van de Rozenberg. But it was no problem for the ice cool Belgian, who delivered a team double clear, shooting the Pirates up the leaderboard, with Delestre cheering on from the kiss n’ cry enthusiastically.

Pressure was on the reigning champions Valkenswaard United, but star striker Alberto Zorzi showcased his phenomenal consistency, producing a foot-perfect clear with Cinsey to pass the baton on to teammate Bertram Allen. Riding young horse Izzy By Picobello, Bertram revealed the team’s strategy of jumping slow and clear as he kept the pace steady, but clipped the vertical picking up four faults. As they picked up the speed and raced to the last, Bertram had one eye on the clock, but the current leaders also collected a time fault - uncharacteristically for the normally fast-paced Irish rider.

Miami Glory’s Denis Lynch put in a strong round with the grey RMF Bella Baloubet, picking up just four faults. Teammate Georgina Bloomberg cheered on her teammate before taking over the reins with Manodie II H. The American rider put in a valiant round, unluckily clipping the final element of the triple combination to put the team on a score of 8 overall but still in the running for a podium.

The crowd groaned as French Olympic rider Roger-Yves Bost of the Shanghai Swans took out the final vertical, plus picking up a time fault to boot. Another to fall foul of the time allowed was Hamburg Diamonds Audrey Coulter, who delivered a beautiful clear on Capital Colnardo, but picked up the bittersweet 1 penalty.

Diamonds teammate Harrie Smolders brought out top stallion Don VHP Z, with the expressive liver chestnut eating up the ground with his huge stride. A masterful clear from the flying Dutchman shot the team up the leaderboard, with the team in a strong position heading into tomorrow’s final.

Emily Moffitt of the London Knights had everything to do after Eduardo Menezes clocked up 12 faults with Caruschka 2, with the U25 keeping a cool head as she cruised the course with Galip. The pair picked up four faults after an unlucky rolled pole, and a time fault, putting the team on a score of 17 faults overall.

More clears came from Cannes Stars’ Christian Kukuk, who teamed up with legend Ludger Beerbaum for the first time in the Championship. Speaking after his round he said: “We know each other well, he can give me tips and it’s fun - a pleasure for me!” But all the experience and multiple Olympic medals couldn’t keep Ludger Beerbaum clear, as the top German rider picked up an unusual sixteen faults with Chacon.

So it was the St Tropez Pirates who took pole in Paris, with Delestre and Guery keen to avoid a repeat of their recent results when the pressure came down to the final. Tactics will come into play, with all eyes on the teams to see who will field rider and / or horse changes, and what the final line-up for tomorrow’s event will be.

The action kicks off at 16:15 local time, tune in via GCL TV to watch as the eighth leg of this nail-biting Championship unfolds.