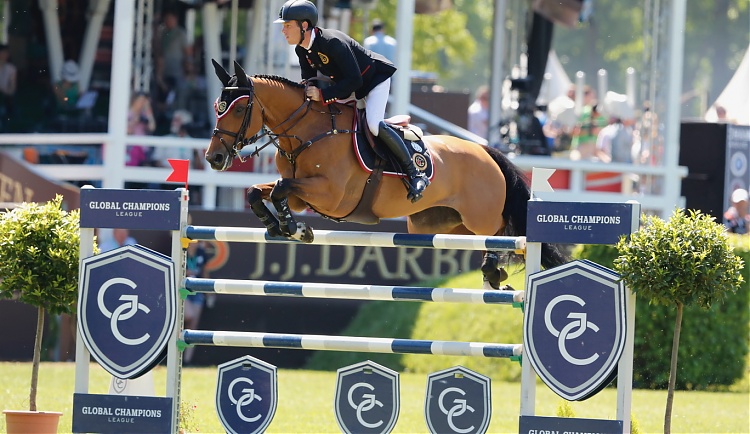 The ice cool duo came into the final round in pole position and, as some of the other teams cracked under pressure, Scott and Denis were the only ones to jump four clear rounds over two days of thrilling team jumping.

In the overall GCL ranking, Hamburg Diamonds — 5th here on home soil — leapt up one more place to the top of the series leaderboard on 98 points, nudging out Valkenswaard United, who drop to second position on 93 points. St Tropez Pirates stay in third with 86 points, but the London Knights are in hot pursuit with 85 points and will be determined to move up the rankings as the GCL moves to Cannes for leg 6 next month.

The huge and historic Hamburg arena, home to Sunday’s traditional Derby, was bathed in glorious sunshine for the competition on Saturday. The natural amphitheatre made it the perfect spot for a picnic and tens of thousands of enthusiastic spectators packed into every corner with ice creams and cold drinks the order of the day. In sizzling heat, all the ingredients were in place for some electric team action.

Snaking over the verdant and springy Hamburg turf, Frank Rothenberger’s track tested control with related distances and a mix of forward and holding strides, with plenty of inside options round the sweeping turns, should riders wish to save time. The treble combination — an oxer to two towering verticals — rode short but jumped extremely well. A wide Swedish oxer followed on a forward six strides, encouraging horses to drift round the outside bend, but on landing, riders were immediately given the option of cutting inside to the Mercedes vertical so needed to have their horses absolutely in-tune.

With time playing on their mind, there was huge temptation for riders to motor on down to the final vertical but it caused plenty of upsets along the way.

The huge Derby arena played to the strengths of many horses, with Madrid In Motion, Vienna Eagles and Mexico Amigos all conjuring up clears from their first representatives.

A clear from the Hamburg Diamonds’ Audrey Coulter on Capital Colnardo helped keep the formidable squad in contention, while a lovely, flowing faultless round from Jessica Springsteen and Cynar V helped keep the Shanghai Swans snapping at the heels of the podium-placed teams in fourth after the first riders all jumped. Jessica’s team-mate Janne-Friederike Meyer praised her “amazing round” — “we have girl power and the crowd behind us” said the local rider.

Just one mistake from Laura Kraut and Deauville S saw the Rome Gladiators drop down to fifth but immaculate clears then followed from each of the top three teams to pile on the pressure for the second riders.

Tactics came into play again as teams took advantage of the ability to swap horses and riders during the two rounds of the competition. Miami Glory’s Scott Brash brought out the big guns for the final, swapping from Hello Forever to his top horse Ursula XII, who loves these big arenas and made the track look unfeasibly easy. Chantilly Pegasus also finished on a zero score thanks to Martin Fuchs and Clooney 5, who upped the pace considerably today. He followed Sheikh Ali Bin Khalid Al Thani riding First Devision, who kept the Doha Fursan Qatar team in contention in third place with a team total of two after a time-fault apiece from the first leg on Thursday.

As the sun baked down, the competition intensified. Further down the standings, the Berlin Lions and last week’s winners Cannes Stars each pulled a clear round out of the bag, but then fault-free performances were thin on the ground until the Monaco Aces, coming through on a team total of 12, produced a clear courtesy of Daniel Bluman with Ladriano Z. Harrie Smolders and Don VHP Z quickly followed for the Hamburg Diamonds — a score that would prove pivotal in the overall standings and put them eventual fifth in front of their home crowd.

Barely a fence separated the top teams but a clear from the Rome Gladiators’ second rider Olivier Philippaerts and H&M Cabrio Van De Heffinck kept them in fourth on a team total of 8.Earlier Olivier had competed in Round 1 on Ikker going clear and the team made a strategic decision to swap to Cabrio for Olivier’s second crucial round.

One fence down for Bassem Hassan Mohammed and Gunder for the Doha Fursan Qatar squad made no difference to the team standings, but opened a narrow margin of leeway for the final two teams.

Lauren Hough and Ohlala, representing Chantilly Pegasus, set off with determination but, agonizingly the final fence fell for this speedy pair, leaving them on a four-fault team total.

All eyes were then on the in-form Denis Lynch and RMF Echo, winners of a class here earlier in the week, as they set out to give Miami Glory the victory they so richly deserved. This long-striding chestnut cruised round without ever looking like touching a rail and their immaculate clear meant victory in Hamburg for the Irishman and the Scotsman.

So the fifth leg resulted in an outstanding win for Miami Glory, with Chantilly Pegasus second on the podium with a team total of 4 and Doha Fursan Qatar in third with 6 points.

The GCL Championship now heads to Cannes for the sixth leg,where Hamburg Diamonds will be hoping to retain their overall lead and Miami Glory will be aiming to continue their rise up the leader board.

Volker Wulff: "We had really good sport and the afternoon was amazing it is very hard to top it. Hamburg Diamonds are in the lead of the ranking now and it’s the right place to take the lead. The crowd was amazing today again, three days almost completely sold out. They liked it the concept and we are happy to have it here."

Jan Tops: "This year it turns out that all the top riders if you want to play for the podium are putting their best horses in and it is a qualifier for the Grand Prix. You see that every week there are different tactics, sometimes team make mistakes but you Lauren Hough Denis strong team new pairs. At the moment Hamburg Diamonds leading from Valkenswaard United."