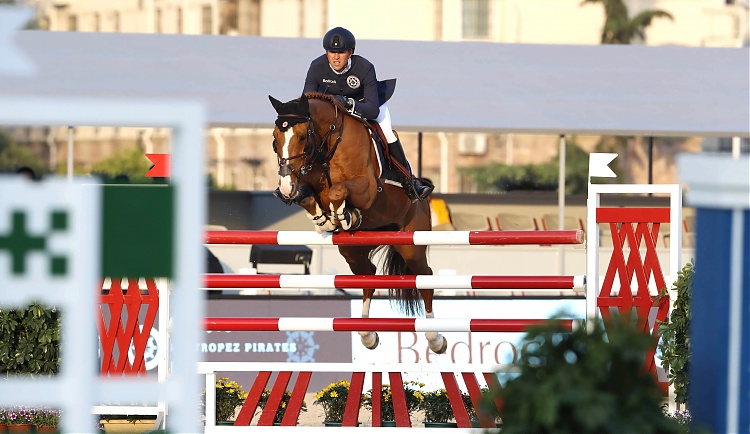 St Tropez Pirates took the lead in the opening round of the Global Champions League in Shanghai setting up a tense final tomorrow.  Simon Delestre - who’s proving a strong anchor for the team so far - and Julien Epaillard blazed the trail in today’s €155,000 class. Only 9 points behind the leaders Valkenswaard United, they are now in hot contention to take over the lead.

Stunning Shanghai played host to round one of the Global Champions League with 18 teams watched by passionate fans, who gasped and cheered the athletes during the third leg of the 15-event global championship circuit.

Before the competition top riders Marcus Ehning and Harrie Smolders spoke about the GCL  season. Marcus Ehning, who is riding for Valkenswaard United in his GCL debut, said: “It is the first time for me here in Shanghai and it is amazing. Being in the GCL is new for me and I am excited to see how the season goes, it is now really on the top level. They are really big classes and everybody wants to be good. You need your best horses to be in front. We have a serious team with very good young riders and they are all very competitive. We had a good start and I think we can make it hard for the others.” Speaking of his compatriot Ludger Beerbaum, who is making his debut in the GCL for Cannes Stars, Marcus said: “He has won everything in the world but this is something new so it is interesting for him.”

Harrie Smolders of Hamburg Diamonds said: “Last year was great for the Diamonds and this year will be more competitive, more teams, stronger competition, more difficult classes, better riders, better horses and it is going to be tougher.”

New Hamburg Diamonds recruit John Whitaker made a big impression with top mare Ornellaia, jumping a neat clear around the 1.50/1.55m course and heaping pressure on the shoulders of U25 team mate Jos Verlooy. But the young star delivered a flawless round with Caracas, keeping the team score on zero and putting them in second place ahead of tomorrow’s final. The only other team to jump double clear were the Paris Panthers, with long-term friends Jack Hardin Towell and Darragh Kenny the epitome of perfection as they wowed with horses Charly Chaplin S and New York.

Uliano Vezzani’s first round course proved a tough test for the world’s best with galloping distances and ultra delicate poles. Many had the first fence down, a gappy green and white oxer, while the Longines Global Champions Tour double took out a few of the top contenders. The penultimate fence also caused problems leaving spectators groaning as the beige plank fell time and time again. Moscow Bears were unfortunately eliminated after Ramzy Al Duhami - who had won an earlier class - crashed through the oxer featuring a liverpool, meaning that he and teammate Kamal Bahamdan cannot progress to the final tomorrow. Home team Shanghai Swans looked set for a strong result on home turf, until French star Roger-Yves Bost collected a highly unusual 17 faults with Qoud'Coeur de la Loge, dropping the team to 16th overall.

The London Knights also put in another strong display, with Ben Maher jumping a clean round on Don Vito, while teammate Eduardo Menezes picked up an unlucky four faults with his horse Chacgrano.

Miami Glory’s Scott Brash had an uphill battle, after 21 faults from teammate Kimberly Prince dropped Miami Glory down the order. But the British rider showcased his flair and skill with Hello Annie, jumping a masterful clear round, propelling himself up the individual order ahead of the jump off. Valkenswaard United also had everything to do, after an unlucky fence for Alberto Zorzi meant the team collected four faults. Bertram Allen couldn’t keep it clear with four faults dropping the team down to 10th place.

For last year’s winners Cascais Charms, one fence made an expensive difference as Andreas Kreuzer had four faults dropping the team from 1st position to 7th today.

From an individual perspective, Darragh Kenny reigned supreme as the first day of the Shanghai Longines Global Champions Tour took off in style. Competing as part of the Paris Panthers, and riding his 10 year old bay gelding Charly Chaplin S superbly, the Irish star took the prestigious top spot which saw a high-octane jump-off putting spectators on the edge of their seat in the perfect prelude to tomorrow’s action.

With 18 other jump-off riders to contend with, the Irish star beat the likes of David Will, Marcus Ehning and Jos Verlooy by galloping to the fences and making an incredible turn back to the skinny vertical. Darragh and his horse blitzed the rest of the field, crossing the line in a phenomenal 38.87s, propelling the impressive combination into the lead, and storming to the class win after an edge of the seat jump-off round.

The action kicks off again tomorrow at 12:30 local time, where team tactics and strategy will come into play as the riders unite to earn valuable GCL Ranking points. With the option to change horses and / or riders between the two rounds, all eyes will be on Shanghai to see who will take centre stage in tomorrow’s GCL of Shanghai final. All the action will be available to watch via the live streaming platform, GCL TV.