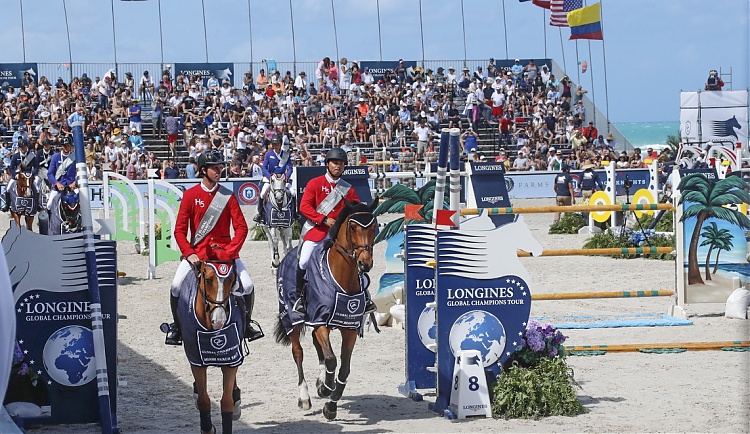 In an incredible turn of events, London Knights' Kent Farrington and teammate Ben Maher overtook leading team Valkenswaard United in a dramatic upset in the Global Champions League Final. After only two events, the fight for the coveted title is already super competitive and tactical with team riders and trainers strategising to get an early advantage in the championship. Talking about the GCL and the new format, top American rider and World No2 Kent said: “I think it’s really exciting what Jan is doing for the sport - he’s started the Global Champions Tour [12] years ago, and it’s been evolving ever since. I think the team competition is the latest evolution of his vision for big sport. We can already see big changes from last year - I’m really excited to be a part of it and it’s a great way to showcase our sport here in Miami Beach.”

Speaking from the live GCL TV studio Shanghai Swans team rider Jessica Springsteen said of the event: “It is amazing jumping here on the beach and riding here in the morning at sunrise. The new Global Champions League format is fantastic, it is more exciting and really fun.” Thousands of fans packed the grandstands ahead of the Global Champions League of Miami Beach, and were treated to an extra special moment when home team Miami Glory paraded the arena in a stunning red 1963 Chevrolet Impala. Scott Brash, Georgina Bloomberg and Kimberly Prince waved to the fans from the open top car in front of cheering fans. As the team riders stopped in front of the grandstand fans dashed to the front to get autographs and photos with the Miami Glory riders.

The atmosphere was electric, with spectators pumped up to watch the world's best in action just inches from the turqoise Atlantic Ocean.  Easter holidaymakers, new to the sport, were delighted to see show jumping for the first time on such a spectacular stage with the world’s top equine athletes delivering thrilling competition. Hundreds of guests enjoyed world class hospitality in the beautiful VIP Lounge which stretches the length of the arena and offered breathtaking views across to the Atlantic Ocean. Global business heavyweights joined leading socialites for a stunning afternoon of top-level sport in a unique destination.

Valkenswaard United looked set to continue their Championship reign as they headed to the final at Miami Beach in pole position following Thursday's Round 1. Maintaining their flawless score of zero faults, teammate Alberto Zorzi put them in a strong position to take the gold as they did in Mexico City last week. But, as the last rider to compete over a challenging course, Bertram Allen knocked down two fences along the track, scoring a unusual 8 faults and dropping the team to a second place finish.

Doha Fursan Qatar came into today’s sizzling round with just 2 faults overall sitting in the second place spot. Unluckily, Sheikh Ali Bin Khalid Al Thani had the penultimate jump down to finish with 4 faults and Bassem Hassen Mohammed scored 8, so they slipped off the podium into fourth place this week with a total of 14 faults. Olympic Gold Medallist Scott Brash joined forces with teammate Georgina Bloomberg to represent the home team Miami Glory on their home turf, with both riders hungry to show well on home soil.  Despite the cheers and the incredible atmosphere from the local crowd, the team had to settle for 12th after unlucky faults from both riders dropped them down the order.

The formidable London Knights jumped to the top spot on the podium, earning gold after a masterful display from the team riders. In Round One Kent Farrington dropped one rail and his teammate Ben Maher was clear, which meant they entered into the final today with just 4 faults. Switching places today, Ben was the one who picked up a 4 fault score, causing the team to teeter with the potential for a podium spot. Coming in close to last and with all the pressure on his shoulders, Kent flew around the course with his feisty chestnut horse Creedance - with the pair the speediest ride of the day and clear for the class win, as well as elevating the London Knights to the GCL Final Miami Beach top podium spot.

Moving up from the sixth to the third position for the week were the St. Tropez Pirates. Jérôme Guery and Simon Delestre represented the team once again with a final score of 9 and a second place finish in Mexico City. These two friends joined the podium finish once again this week, earning the third position with a total of 12 faults and shooting the team up the overall rankings to third on 46 points.

As the victorious teams took to the podium followed by their victory gallop, the crowds cheered and the champagne was sprayed, adding to the excitement of the second stop for the Global Champions League on the sands of Miami Beach. Valkenswaard United go into the next leg in Shanghai, China, still holding on to the ranking lead with a total score of 55. The London Knights jump into second place with a total of 47 and the St. Tropez Pirates sit in a very close third with a total of 46.

Certain to be a stellar season, and with high octane action, world class sport and nail-biting drama the GCL is off to fabulous start. Be certain to follow as it travels the world hosting the best riders and horses as teams battle it out around the world, culminating in the final at AL SHAQAB in Doha this November.

Jan Tops, Co-Founder of the Global Champions League: "I think it was super exciting until the last moment. The best thing about the League is we have different things coming that comes for the team and also for individual and qualifiers for the Grand Prix its totally different I think that’s what the tour is about, last week we had a big grass arena, beautiful with lots of space, here by the beach is unique."

Kent Farrington, London Knights, 1st place with Ben Maher: "I think it’s really exciting what Jan is doing for the sport - he’s started the Global Champions Tour [12] years ago, and it’s been evolving ever since. I think the team competition is the latest evolution of his vision for big sport. We can already see big changes from last year - I’m really excited to be a part of it and it’s a great way to showcase our sport here in Miami Beach. [Ben and I] are good friends and he is a tough competitor great rider and like most of the teams, they are made up of really strong riders I am happy to be a party of it and you know it’s always fun to be with your friends."

Bertram Allen, Valkenswaard United, 2nd place: "We got most of the hard work done, we were very good the first day and then Alberto opened the window when he was clear. Unfortunately it didn’t go our way today but we are still second in the overall lead so we will keep the pressure on."

Alberto Zorzi, Valkenswaard United, 2nd place: "It’s the second time I jumped in the team with Bertram. Last week we won, today we were second. I am so happy for the team; the horses jumped very good and I am so proud."

Simon Delestre, St Tropez Pirates, 3rd place: "We tried today! We had a fantastic show between Mexico and here and the new format is fantastic for the horses because we have no additional round. With the new format we can change horses when we want and how we feel the horse and this is really something great for us - that we can adapt [our plans] with the ring and with the horses."

Jérôme Guery, St Tropez Pirates, 3rd place: "Simon did again really great this weekend - last week he was double clear, this week clear and one down. I am really lucky to have a partner like him."