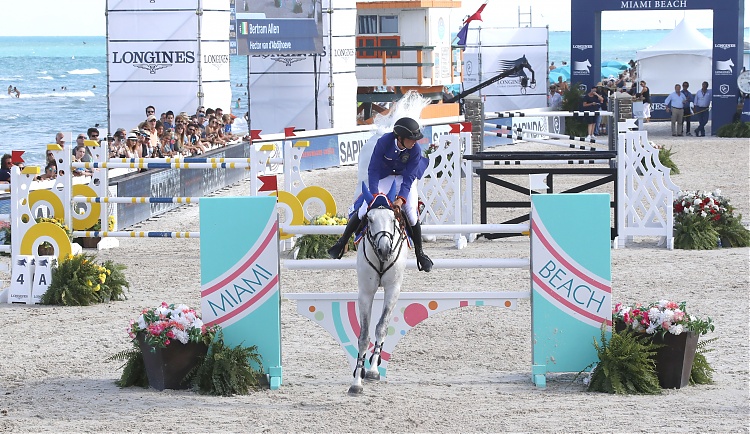 Valkenswaard United made their Championship intentions clear with another incredible display of teamwork and skill in the first round of the Global Champions League of Miami Beach. Bertram Allen and Alberto Zorzi put in a perfect performance to ensure their team would be on pole heading into Saturday’s final, breaking away from the rest of the field as the only combination to jump clear.

Uliano Vezzani set a tough course, asking questions of the riders in the tight sand arena. Coming straight off the back of the expansive grass arena of Mexico City, the riders had to navigate the lengthening shadows and distractingly beautiful Atlantic waves as they competed just inches from the turquoise blue ocean. Fans packed into the free grandstand and lined the arena, with a perfect view of the world’s best as they jumped the imposing 1.50/1.55m course.

Poles rolled all over the course, with top riders caught out by sharp cut backs, wide oxers, and light poles, as they fought for the best spot ahead of the final on Saturday. Janne-Friederike Meyer-Zimmermann of the Shanghai Swans was the first to jump clear, with the German riders powering to a stunning clear with her speedy dark bay horse Chuck, who she navigated beautiful around the tight turns. Teammate and World Number 3 Daniel Deusser had two down, with Equita van T Zorgvliet’s large stride eating up the ground as the fences approached fast.

Agonisingly, home team rider Scott Brash had the final fence down for Miami Glory, with the crowd groaning as their home team hero picked up four faults and heaping the pressure on the shoulders of teammate Georgina Bloomberg. Olympic Gold Medallist Ben Maher was the second to go clear for the London Knights, putting in a flawless display with the fired-up Don Vito, the chestnut pulling to the fences and keen to make light work of the intimidating course.

Both Doha Fursan Qatar riders picked up an unlucky time fault each, putting them on a team total of 2 faults, but with the team clearly delighted at their horses’ performances and going clear. As the second riders entered the ring, the added pressure soon began to show as athletes competed for themselves, but also for their team’s position in the starting list of Saturday’s final.

The most amount of pressure was on home rider Georgina Bloomberg and her horse Manodie H, who took centre stage for Miami Glory. With the spectators waving their Miami Glory fans Georgina took an unlucky few poles, adding to the team total and dropping the home favourites down the order.
The crowd hushed as American hero Kent Farrington for the London Knights and his stunning grey horse Dublin entered the picturesque arena. With a team score of zero, the pressure rocketed up a notch but the top American kept his cool to jump almost clear, rolling a pole along the VIP hospitality to pick up 4 faults. Despite this the team time was a speedy 146.42s, keeping them highest of the four faulters.

Valkenswaard United’s Bertram Allen was used to the pressure, but still put in a masterful round with the ever-expressive Hector van d’Abdijhoeve who kicked and bucked his way to the clear. With the team the only combination on double clear, Valkenswaard United once again cemented their position at the sharp end of the grid ahead of Saturday’s final. Doha Fursan Qatar’s 2 time faults slipped them down into second position, and Ben Maher and Kent Farrington’s efforts for the London Knights meant the team would kick off the final in 3rd overall.

Tune in on Saturday at 13:00 to watch all the action as the battle for the GCL Miami Beach unfolds. Will Valkenswaard United lift the trophy again, or will one of the other formidable teams look to spoil the party. Tune in to find out!