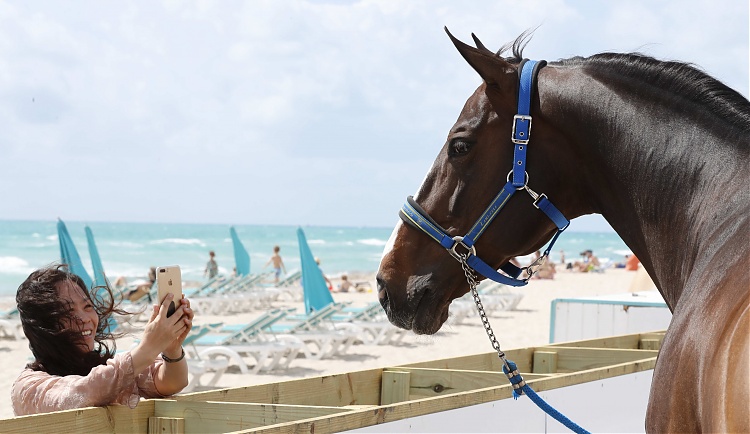 As the Global Champions League heads to the spectacular destination of Miami Beach, the team rider list for the 2nd leg of the 15-event Championship can today be revealed. With a star-studded line up, and unique rider combinations, the 18 strong grid of teams will kick off the next leg of the Championship on the breath-taking shores of Miami Beach for another weekend of top sport and entertainment.

Talking about the first GCL event of the season in Mexico City last weekend, top Dutch rider Maikel van der Vleuten - who rides for Madrid in Motion - said, “I think the new format is fantastic. There are more opportunities to change riders and horses in a team, which means that the horses are always put first. We saw great, top sport in Mexico City, with competition of the highest level - I think the season is going to be very exciting."

Current leaders Valkenswaard United will keep the formidable combination of Bertram Allen and Alberto Zorzi for GCL Miami Beach, with the young guns pushing full throttle to continue their campaign to keep the Championship title. To aid their luck, the team were drawn last to go in the order at the draw earlier today. Just five points behind sit the St Tropez Pirates, who will also keep the experienced duo of Simon Delestre and Jerome Guery for this round of high-octane action. A further four points from the second place team are the Chantilly Pegasus on 21 points, with the young and dynamic combination of Nicola Philippaerts and Lucy Davis joining forces for this leg of the League.

Home team Miami Glory will field established combination Scott Brash and Georgina Bloomberg as they return to home turf for the second round of competition in the Championship. Looking for the support of local fans, Miami Glory have previously performed well on their own sparkling shoreline, with the team taking a strong third place last year much to the delight of the local crowd. Local fans will also be able to cheer on top American rider Kent Farrington as he joins forces with British Olympic Gold Medallist Ben Maher for the first time with the London Knights. Fellow US rider, Laura Kraut, returns to Miami Beach with the Rome Gladiators alongside Lorenzo de Luca, with the pair uniting for the first time.

Another American star will be Paris Panthers’ Jennifer Gates who will team up with top Irish rider Darragh Kenny, who debuts the GCL this year. Cannes Stars will field an all-German team, with the experienced Marco Kutscher paring up with rising star Christian Kukuk, while the Shanghai Swans will field World Number 3 Daniel Deusser and long-time Swan Janne-Friederike Meyer-Zimmermann. Christian Ahlmann will team up with Yuri Mansur Guerios for the Mexico Amigos and Canadian star Eric Lamaze will be back for the Hamburg Diamonds, this time alongside young Belgian talent Jos Verlooy.

The GCL of Miami Beach is a spectacular showcase of top sport and entertainment. Set against breath-taking views, riders and horses compete just inches from the glittering Atlantic ocean and spectators are able to walk right up to the edge of the arena to watch the stars of show jumping battle it out for precious ranking points. With every score counting, the pressure is on the riders to go clear and put their team in the best position possible during round one, with the fastest team with the least faults in pole position for the Final on Saturday.

Two combinations who know each other well are Doha Fursan Qatar’s team of Sheikh Ali Bin Khalid Al Thani and Bassem Hassan Mohammed, while Vienna Eagles will combine Gregory Wathelet and Niels Bruynseels for this leg of the Championship. Max Kühner and Anna Kellnerova will unite for the Berlin Lions and David Will returns with Carlos Lopez for the Cascais Charms, with the pair hoping to better their result following Mexico after an unlucky fall for David eliminated them from the competition. Pieter Devos and Danielle Goldstein will team up for Monaco Aces, while Leopold van Asten and young star Gonzalo Anon Suarez unite for the first time for Madrid in Motion.