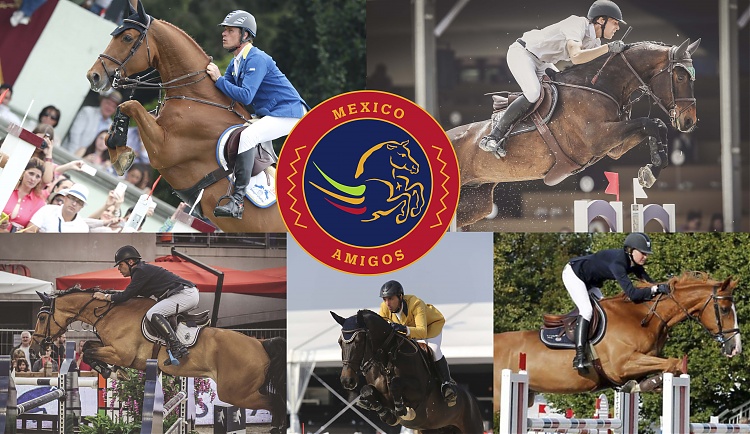 Introducing the Mexico Amigos: A Colourful and Dynamic Combination

What do you get when you put together one of the leading German riders in show jumping, a Norwegian who lives by the motto “never give up, anything is possible”, a Brazilian based in Belgium and two Swedes? The answer? A colourful and dynamic team who go by the name of the Mexico Amigos.

World Number 3 and top German rider Christian Ahlmann joins the GCL this season and will be in action at the first round of the 15-leg Championship at the home event in Mexico City. The 42-year old ended up fourth in last year’s Longines Global Champions Tour Grand Prix of Mexico City and is hoping to be successful this year, too: "I am really looking forward to our home show in Mexico - last year it was a very positive surprise as a new venue: the arena and the atmosphere were great. It was great to see such enthusiastic crowd. I must say that Mexico was one of my favorite shows last year! As a team I think we are a great mix: we are good friends and colleagues of all ages and nationalities. I believe we will be a strong rival to the others”, Ahlmann said.

And formidable they are. Christian is joined by 35-old Henrik von Eckermann, one of Sweden’s leading riders and a teammate who would never have before been possible without the innovative new GCL format. He has also been a regular face in the Longines Global Champions Tour, marking his best season in 2014 with horses like Gotha FRH and Cantinero. This year will be a fresh start for Henrik, having started his own business in September last year and relishing the opportunity to compete on the GCL for the first time: "I am really looking forward to the season with Mexico Amigos. I am really competitive, and the team events always have a different kind of excitement to them. I think we have a very good team and I can't wait to get to work with them on chasing the overall title. For our home event in Mexico we have sent the riders we thought would perform the best on the massive grass ring."

The Norwegian in the team is of course the 57-year-old Geir Gulliksen, who has been the backbone of showjumping in his home country for decades. He is looking forward to fierce battles alongside his team mates: “I think we will be a really strong team. Henrik's third place in the Longines World Cup Finals is just another proof of it and we are very happy for him for that result. I am really excited for the season and we wanted to send the strongest riders straight to the season's first competition in Mexico”, Geir said ahead of the season opener in Mexico City.

Yuri Mansur, the 37-year-old Brazilian who lives in Belgium, will also be present in Mexico. For him joining the Mexico Amigos is a dream come true: “It is a real dream to be a part of a team, but to be one team with such great riders – that is even better. It has been a long and hard road to realize this dream and I am so happy and motivated”, Yuri said. When it comes to chasing the overall title, Yuri has a clear message to his team mates: “Let’s get to work!”

Last but not least is a second Swede, 23-year Evelina Tovek, who is also the youngest member of Mexico Amigos. She comes from a horse family; her sister is a successful rider too, but in dressage. “This year will be the most exciting year so far in my career - I'm really happy to be a member of the Mexico Amigos and to get this amazing experience”, Evelina said. She will be in good company and is confident to make her team proud: “I'm really looking forward to this opportunity! I am grateful to fight with the other amazing riders in the team and learn from the best!”

Different ages and nationalities combined with that competitive edge and the common determination to work hard for your goals and never give up – the Mexico Amigos are a team of passion, talent and serious competitive edge. With a passionate local crowd cheering them on, and clear tactics and strategies already coming into play, the Mexico Amigos will be ones to watch this weekend.