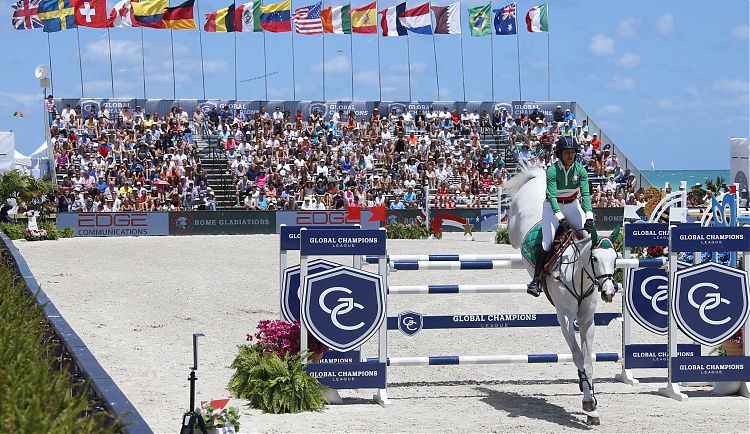 The second season will see the League class take place on two days instead of one, doubling the GCL action. And for the first time GCL riders will be able to earn Longines world ranking points as well as extra prize money. A total of €22 million euros will be on offer for riders this season from both the GCL and LGCT events

The innovative League was launched last year bringing a modern and dynamic new force to show jumping. Top riders from different countries competed together on teams for the first time in the sport’s history. The League created strong new alliances and intense rivalries.

The 2017 Global Champions League season, which is officially approved by the FEI, will open in Mexico City in April with teams competing at 15 incredible destinations around the world.

The countdown is on and here is a brief guide to the format:

How does it all begin?

The first part of the League will be on the opening day of each event and this CSI5* 1.50/1.55m class will see teams’ combined scores taken forward to the second class.

After the League riders have completed their rounds, the class will open to individual riders. All riders in this class will be chasing Longines world ranking points and prize money.

Individual riders, not associated with teams, will be the first to start in this class to try to qualify for the LGCT Grand Prix.

Then the GCL teams will take centre stage, carrying through their combined faults from the first class. The results of the League riders will count towards their overall team score, but now their performance will also determine whether they qualify for the LGCT Grand Prix as individuals.

The overall winners of the League competition will be the team with the least combined faults and quickest time.

And the final part?

A quick recap on what’s new…

Coming Next…
Further information about the 2017 GCL teams will be announced soon with special reports on riders, horses and the events around the globe. Make sure to follow us on Facebook, Twitter and Instagram to keep up with all the latest news.