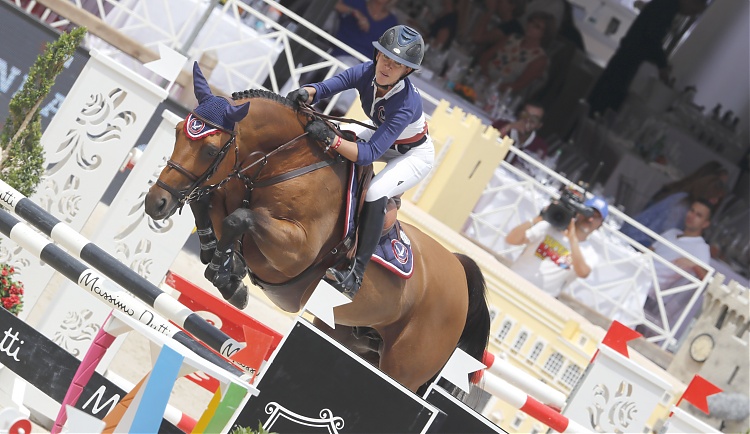 In Focus: Soaring High with the Vienna Eagles

As the Global Champions League now looks to the stunning city of Vienna for the penultimate round of action on the 2016 GCL season calendar, we take a closer look at home team Vienna Eagles. The team scored a sensational win in Cascais earlier this year, with Lauren Hough and Danielle Goldstein taking the top step in tough conditions under the night lights in Portugal.

We take a look at the home team,

Born into a family of equestrians, Lauren Hough was riding before she could walk. Her father, Charles ‘Champ’ Hough took an Eventing Bronze Medal at the 1952 Olympics in Helsinki and her mother, Linda, was a successful Hunter rider for many years. Lauren credits her parents as being her biggest inspiration.

Having worked with so many amazing horses over the years, Lauren is unable to pick a favourite, and despite her many accolades her motto remains: “It’s all about the horse.”

Qualifying for the Sydney Olympic Games in 2000 aged just 23 was a key moment in her career, as well as winning the National Horse Show Grand Prix back-to-back in 2001 and 2002, and winning the Team Gold Medal at the Pan American Games in 2003.

Competed in the 2000 Olympic Games

Three-time Olympic medal winner Rodrigo Pessoa began riding aged 4 with his father Nelson Pessoa, an Olympic level equestrian and show jumper. Now with over 70 Grand Prix victories and more than $7,000,000 in prize money to his name, the Brazilian star counts winning the World Championships in Rome in 1998 as his most memorable career moment.

He won the World Cup Final in 1998, 1999 and 2000 on Baloubet du Rouet, making him the first rider to claim victory at the event three times consecutively with the same horse.

His father and Ludger Beerbaum have been his biggest career influences, and his advice to other riders is to "keep going, no matter what." Special Envoy, Lianos and Baloubet have been his favourite horses.

This season Rodrigo has competed at GCL Antwerp, Shanghai, Hamburg and Chantilly.

American born Paris began riding at the age of three, and competing at the age of seven. April 2014 saw her move to England to be able to compete in Europe and she now currently trains with American rider Lauren Hough.

This year Paris has competed in the GCL Madrid, Chantilly, Cannes, Paris and Valkenswaard.

Born in the United States of America, Danielle became an Israeli citizen in 2010. Her love of riding came when she was invited to take a riding lesson by a friend when she was young girl. By age eight, she was taking lessons all through the summer.

Danielle currently competes nationally and internationally at the Grand Prix level. Danielle declared her professional status in 2012 after 15 years of riding, training, and winning at the top of the show jumping sport as a successful amateur and junior competitor. She competed in her first Grand Prix at the age of 16 and has won both Individual and Team Gold Medals in the North American Young Rider Championships. In 2010, Danielle acquired her Israeli citizenship and began competing under the Israeli flag.

In 2013 Danielle represented Israel in the European Championships and was became eligible to represent Israel in the 2014 World Equestrian Games in Normandy. Also in 2013, Danielle served as the chef d'equipe for the Gold Medal winning Israeli Jumping Team in the Maccabiah Games. Danielle is also the visionary behind Starwyn Farms and the International Equestrian Education program that is hosted at Starwyn Farms in conjunction with the FTI Winter Equestrian Festival.

Only 18 years of age, the young athlete has already amassed a string of high profile victories across the globe. Emanuel first stepped on to the international stage by dominating the high-profile 2012 Winter Equestrian Festival in Wellington, Florida, where he won six Championship and 12 Reserve Championship titles. At the end of the 12-week show jumping tournament, Emanuel was selected from thousands of athletes as the Future Champions Leading Junior Jumper Rider.

In a feat never before accomplished by a teenager, Emanuel was named the Overall Jumper Rider at the 2013 and 2014 Winter Equestrian Festivals while Hollow Creek Farm was crowned the Overall Jumper Owner. In 2015, the accolades continued to roll in as Emanuel, now competing at the grand prix level, won the Hermes Talented Young Rider Award.

In 2013, in what would be the first of numerous team appearances, Emanuel made his senior team debut riding ZZ Top as a member of Venezuela’s Gold Medal team at the Bolivarian Games held in Trujillo, Peru. In 2014, he made his first major games appearance at the Alltech FEI World Equestrian Games in Normandy, France, before he had even celebrated his 18th birthday. Weeks later, Andrade rode in the 2014 Furusiyya Nations Cup Final in Barcelona, Spain. The icing on the cake came at the end of November at the 2014 Central and Caribbean Games in Veracruz, Mexico, where Andrade’s impressive results riding Nokia de Brekka earned him the Individual Silver Medal.

A student in his hometown of Caracas, Emanuel divides his time between competing in Venezuela and in the United States. He currently trains with 2004 Olympic Champion Rodrigo Pessoa of Brazil.

This year sees Emanuel compete for the 2016 Global Champions League as the U25 rider for Vienna Eagles. This season he has competed at GCL Miami Beach and Mexico City.