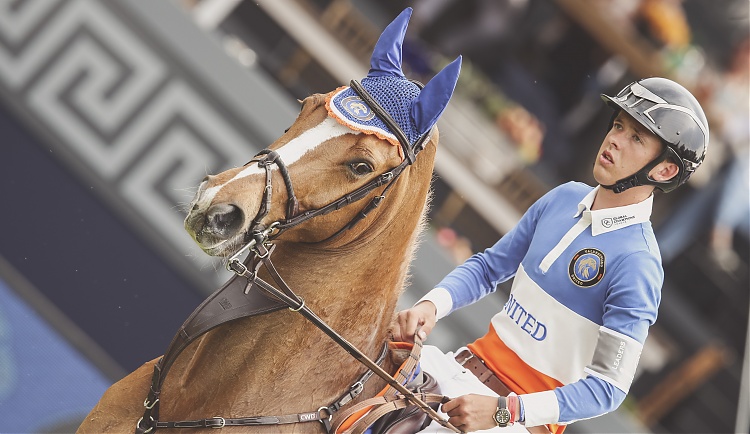 The team combinations for the pivotal 12th leg of the Global Champions League can be revealed today as the competition ratchets up a gear with all eyes on overall ranking leaders Valkenswaard United. Twelve teams, including several riders in their final top-level competition before heading directly to the Rio Olympics, will take to the picture-perfect grass ring at Tops International Arena in The Netherlands at 15:30 local time on Sunday.

The intensity of competition will escalate with teams hungry to rise up the rankings in the first event following the team transfer window in July. Home hero Maikel van der Vleuten (NED) is one of the riders heading to the Olympics who has re-scheduled his flight to Brazil to ensure he competes in this weekend’s GCL. He said: “I made the decision with Harrie together to re-book the flight on Monday, so that we could compete here on Sunday.”

Leading the ranking on 256.50 points - with only a slim five point lead - Valkenswaard United will undoubtedly be feeling the pressure with Antwerp Diamonds, Monaco Aces and Rome Gladiators breathing down their necks. In today’s GCL draw, watched by team riders, Antwerp Diamonds drew the lucky straw going in last place in the starting order.

With every point counting towards the final result each leg is critical in the high octane team format. John Whitaker and Emily Moffitt team up once again for Valkenswaard United, with the pair proving strong in events previously and looking for another podium to add to their impressive tally.

Hot on their heels will be the winning duo of Audrey Coulter and Jos Verlooy, a pairing that have proved consistent throughout the season so far, and whom still hold the title of being the only team to win their home event so far. Monaco Aces will field top Dutch riders Maikel van der Vleuten and Leopold van Asten, both keen to impress in front of a local audience and with Maikel aiming for a good result in his final competition before the 2016 Rio Olympics.

The Paris Jets are pulling out the big guns, with the heavy-weight duo of Rolf-Göran Bengtsson and Gregory Wathelet joining forces. Fourth in the ranking, Rome Gladiators will combine Marlon Zanotelli with Laura Renwick, both of whom have secured podiums so far. Vienna Eagles, the winning team at the previous leg, will see Danielle Goldstein take the reins once more, this time joining forces with Paris Sellon for the first time.

Miami Glory will field a powerful and determined all-American team, with Georgina Bloomberg and Kent Farrington united once more for this leg of the Championship; a pair who know each other well and secured the team’s podium at the opening event in Miami Beach. The Cannes Stars will see young local talent Kevin Jochems join up with the experienced Marco Kutscher for the first time in the Championship, will all eyes on the young star as he performs in front of a local crowd.

Pedro Veniss will be back in action for the Madrid in Motion team, this time riding with new team member Alberto Zorzi, who joins the team following the recent transfer window period. The young talents of Jessica Springsteen and Alexandra Thornton will combine once again for the Shanghai Swans, with both looking to perform well at the Tops International Arena where they are based. Rio Olympic bound Bassem Hassan Mohammed will ride with Faleh Al Ajami for Doha Fursan Qatar and Quentin Judge and Philip Houston will team up for the first time for Cascais Charms.

The team rider combinations is as follows:

Following the team draw earlier today, the starting order for the Global Champions League of Valkenswaard will see the Antwerp Diamonds take the top spot by going last. Ranking leaders Valkenswaard United drew 7th, with the Shanghai Swans drawing the short straw and lining up first to go.

TV channels around the globe will be broadcasting live and highlights from this weekend’s action in Valkenswaard. TV coverage will cross continents bringing thrilling team sports action to fans worldwide. CNBC will be showing highlights of the Valkenswaard leg of the championship across its Pan Europe, Pan Asia and Australia network on 25th August and this weekend CNBC territories will broadcast highlights of all the action at the previous leg in Cascais, Estoril. There will also be coverage on GloboSat in Latin America, SuperSport across the African continent and OSN, the pan Middle East channel, Neo Sports India and TG4 Ireland as well as the equestrian TV channels Equidia, Class Horse TV and Horse & Country TV.