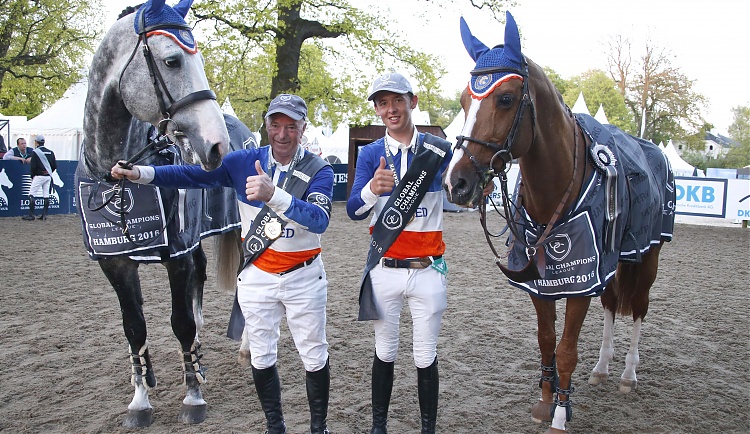 As the Global Champions League gallops towards the final third of its debut season, the twelve teams and 59 riders have stamped their mark on the revolutionary new concept, with its success and acclamation building around the world. Ranking leaders Valkenswaard United will be looking to hold on to their tight lead as they head to home turf, however with the Monaco Aces, Antwerp Diamonds and Rome Gladiators all snapping at their heels, the 11th leg of the Championship is set to bring new drama to the already fascinating season.

As every point counts, each leg of the League is crucial, and the two riders each team fields per event are under pressure to perform to the maximum and secure position as the 12 teams battle it out for the lion's share of the €4.500.000 season bonus prize.

There has been an eclectic mix of podiums this season so far, with riders from all corners of the globe united and proving world-class teams exist beyond nations. Kent Farrington, Laura Renwick, Laura Kraut, Pedro Veniss, Marco Kutscher, Roger-Yves Bost, Scott Brash, Lauren Hough, Gregory Wathelet, Maikel van der Vleuten, Rolf-Goran Bengtsson and Edwina Tops-Alexander are just a few of the top names in show jumping who have succeeded with their teams on the League this year.

And there have been partnerships formed like never before. Two of the quietest riders in show jumping have become firm friends, with John Whitaker and Bertram Allen teaming up for Valkenswaard United and proving time and time again that they are a combination to be reckoned with. Kicking off the year with a stunning win in Miami Beach, the pair won the hearts around the world when asked what their pre-competition strategy and tactics team talk consisted of: “Go fast and clear”. With over 40 years between them in age, the formidable combination have been on the top step of the podium an impressive twice so far, with the team taking three wins overall in the Championship.

The Monaco Aces have been one of the most consistent teams so far, finishing no less than fourth at every event bar two, and taking an electric win under the floodlights in Cannes. Rome Gladiators stormed to the win in Madrid and Shanghai Swans took top honours in Mexico, showing the range and breadth of the teams and opportunity to be on the podium at each competition.

So far the Antwerp Diamonds have been the only team to win their home event, with the bright young talents of Audrey Coulter and Jos Verlooy putting in stunning performances to take top honours. Indeed, a whole host of next generation talent has had the opportunity to shine this season, with the U25 riders playing a crucial part in the League concept. Gonzalo Anon Suarez of Madrid in Motion helped the team take the win in Chantilly after a phenomenal round in challenging conditions, Andreas Kreuzer and David Will of the Cascais Charms beat some of the best, including Olympic medallists, to stand on the top step in Shanghai. Kevin Jochems has been on the podium twice out of the four times he's competed for the Cannes Stars, and Jessica Springsteen, Alexandra Thornton, Philip Houston, Nicola and Olivier Philippaerts have all performed brilliantly at various locations around the world for their respective teams.

Horses too have taken centre stage, with familiar and a few new names propelled into the spotlight. Bokai, Harrie Smolders' stunning grey gelding has been one of the most consistent horses on the League so far, jumping every round he's competed in clear and earning himself the position of being one of the most valuable assets in the competition this season. Antwerp Diamonds' teammate Audrey Coulter's Alex has also caught the eye of many, proving well suited to this ever-evolving class and contributing to Audrey being on the podium six times out of the eight events she's competed on. Bertram Allen saved his LGCT Grand Prix of Paris winning horse Romanov for the Hamburg win, and Rolf-Goran Bengtsson's impressive stallion Clarimo ASK has become a regular face on the League events.

Fans have been able to witness show jumping uniting riders and horses like never before, with support for the teams growing event by event. Team colours, theme music and the stars of show jumping have all contributed to the growing success of the League, and with the calendar stopping at all the unique locations as the LGCT, more and more people are able to experience the beauty of the sport up close and personal all around the world. International brands have the opportunity to partner teams, giving exposure on a global scale and opening up new dimensions of marketing possibilities.

As the League heads to the final few rounds of action, it's set to be a nail-biter of a finish, with the top teams all in with a chance of winning the ultimate prize. While the season so far has been an exceptional showcase of top sport, high calibre jumping, and incredible team spirit, what is set to unfold as the League's debut season gallops to its culmination will write itself into the history books, and remembered as the year that the next step in the innovation of show jumping cements itself as a new era for the sport.