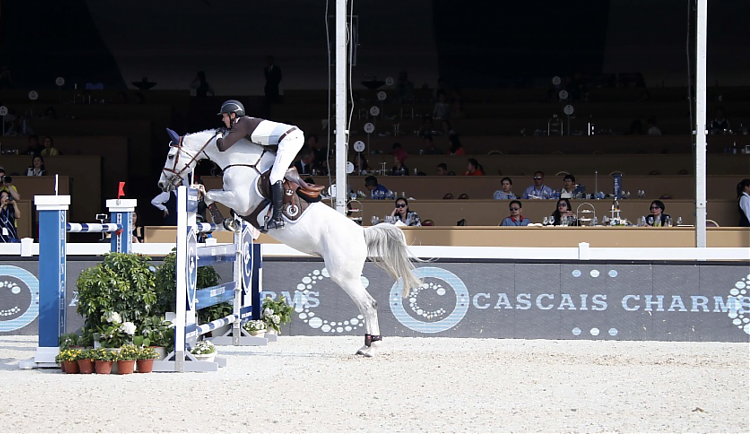 The stunning setting of Cascais will be the backdrop for the 11th round of action in the fascinating Global Champions League season fight. Taking place this Saturday 9th July at 21:30 local time it’s set to be another exhilarating battle under the floodlights to see who will reign supreme in this popular destination.

At the top of the leaderboard sit Valkenswaard United, with the team sitting pretty on 239 points overall. The experienced, and recently announced for the Rio Olympics rider John Whitaker will be back in action for the team this Saturday, this week teaming up with young talent Emily Moffitt. Emily previously rode with Bertram Allen in Cannes, with the pair securing a strong result for the team. While this will be the first time the pair are in action together, all eyes, and pressure, will be on the duo to perform well in the expansive grass arena.

Breathing down their necks will be Monaco Aces’ Schuyler Riley and Lisa Nooren, another new combination, and a pair who will be hoping to knock Valkenswaard United off their top spot, where they sit just three points ahead. Just a further 10 points away are the Antwerp Diamonds, with the team fielding Marc Houtzager and Katharina Offel for round 11 in the Championship, with both riders hungry to take over the leaderboard rankings.

The home team will field the strong combination of David Will and Andreas Kreuzer - the pair stole the show in Shanghai, and with the extra pressure of performing well on home turf, the two young riders will be keen to prove they can repeat their win in Cascais. Talking about their hopes for the weekend, the boys said: "We are ready to do it, we brought our best horses, we are both very, very motivated in front of our home crowd so we hope it goes well!"

Plenty of teams will be fielding their podium achieving combinations, with Rome Gladiators ‘team Laura’ back in action as Laura Kraut and Laura Renwick join forces again for the first time since their Hamburg win. Cannes Stars will bring the big guns out once more, with the ever-consistent combination of Marco Kutscher and Roger-Yves Bost teaming up and looking to score high with their ‘clear and careful’ strategy.

The wonderful parkland of Cascais is transformed for high-calibre show jumping with riders and horses enjoying the picturesque setting. The 'Portuguese Riviera' has grown into a renowned international destination for world-class sport, hosting the America’s Cup sailing, golf, tennis, surfing and motorsports. Blessed with a fine climate most of the year, visitors flock to the coast to soak up the sun and enjoy the great landscape and attractions, with one of the coastal regions biggest draws is the beautiful sandy bay of Praia de Tamariz.

In Portugal there are palaces, museums and national parks to visit and the capital city, Lisbon, is only a short distance away with its top-class hotels, restaurants and bars. The Global Champions League of Cascais is sure to be an exciting event, as teams fight for supremacy in the overall 2016 Championship Ranking.

Back in action for the Shanghai Swans will be Edwina Tops-Alexander, who helped her team win in Mexico City earlier this year. U25 rider Alexandra Thornton will be her partner this weekend, and with the young talent already performing well here in Cascais in the CSI5* classes, this combination will be one to watch as the class kicks off. The Paris Jets will be an "all-Philippaerts” team with Nicola and Olivier joining forces for the first time this year. The twins undoubtably know each other and their horses inside out, so it will be interesting to see how they fare this Sunday with Gregory Wathelet watching on.

Miami Glory welcomes back Scott Brash, a former winner at the LGCT Grand Prix in Cascais, with the top British rider teaming up with Kimberly Prince for this round of action in the Championship. Athina Onassis and Gonzalo Anon Suarez will be the pairing for Madrid in Motion and the formidable combination of Sheikh Ali Bin Khalid Al Thani and Bassem Hassan Mohammed will be the team for the Doha Fursan Qatar. Vienna Eagles will see Lauren Hough anchor the team once more as the Championship gallops into its final third, and Danielle Goldstein will be back in action, and joining the top American rider for the GCL Cascais.