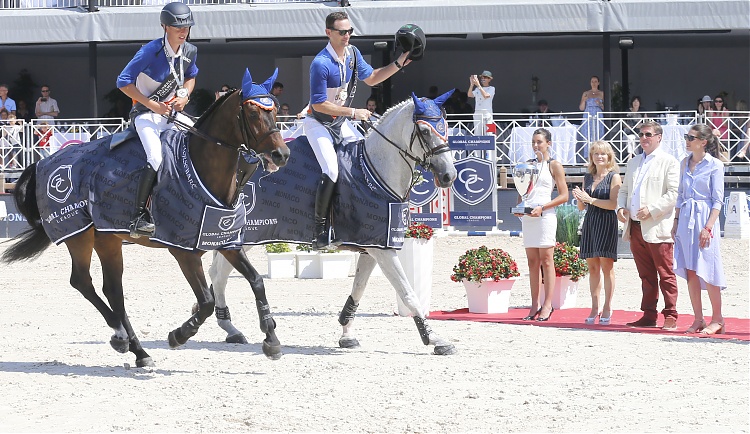 It was an electric weekend of top sport and entertainment at the iconic Monte-Carlo setting, finishing with a thrilling 9th round of action for the Global Champions League. Valkenswaard United took their third win of the Championship season so far, with Bertram Allen Izzy By Picobello and Eduardo Menezes with Caruschka taking pole position for the team at the stunning Monaco event.

Monaco Aces keep hold of their overall ranking lead with a tally of 217 points, with Valkenswaard United’s win today dramatically closing the gap to 214, just three points difference. With every result counting towards the final Championship result, each point gained becomes even more valuable as the teams battle it out to take the prestigious top spot ahead of the final event in Doha. The Rome Gladiators have claimed third on the rankings with 200 points overall, and following their podium today, the Antwerp Diamonds are breathing down the neck of their closest rivals, sitting on 196 points, and just four away from the top three.

The pressure was on the home team Monaco Aces for the Global Champions League of Monaco as the exciting new team completion made it’s debut in front of packed stands. In the previous 8 rounds, the team had only finished out of the top 4 on one occasion, making them one of the most consistent on the League so far.

The riders took to the smallest arena on the League calendar, where agility, speed and scope proved key to the final result. Rob Jansen’s course was a test that demanded both skill and careful jumping from both horse and rider, with the time allowed a challenge in itself. The related distances were fair, but add a stride and riders risked picking up a time fault as they flowed through the 1.50/1.55, course. Being drawn last to go in round 1 meant that Monaco Aces team riders Daniel Bluman and Schuyler Riley knew what was expected, stamping their mark on the competition by being the only team to sail through to round two on 0 faults.

Doha Fursan’s Faleh Suwead Al Ajami with Come Soon and Bassem Hassan Mohammed with Argelith Squid also jumped clear, however an unlucky time fault put them just behind the leading home team. Joining them would be the Antwerp Diamonds (4 faults), Rome Gladiators (4 faults), Valkenswaard United (4 faults), Madrid in Motion (5 faults), Paris Jets (8 faults) and Miami Glory (8 faults). The tight arena saw the delicate poles fall for the likes of Kevin Jochems of the Cannes Stars, and Vienna Eagles' Danielle Goldstein who both picked up 12 faults, pushing them out of contention for Round 2.

The iconic serene harbour set the backdrop for the exhilarating second round, with the latter part of the course altered for the finale. For the 8 teams through it soon became clear that faultless rounds were to be the defining factor in the results. The clears mounted with Scott Brash of Miami Glory, Laura Renwick of Rome Gladiators, Athina Onassis of Madrid in Motion, Daniel Bluman of Monaco Aces and both members of the Paris Jets, Rolf-Göran Bengtsson and Nicola Philippaerts all securing faultless second rounds. An unfortunate miss from Faleh Al Ajami saw team Doha Fursan Qatar out of the running.

The Paris Jets were the ones to watch as the competition came to its climax, however they were pipped to the podium on speed after Audrey Coulter and Jos Verlooy put in blistering rounds with their horses to finish on a combined time of 127.00 against Paris Jets’ time of 129.67s. Valkenswaard United's Bertram had all the pressure on his shoulders, however took it in his stride, riding a stunningly speedy clear with his relatively young 9 year old mare Izzy By Picobello to put them at the top of the leaderboard so far.

Yet it all came down to home team Monaco Aces as Schuyler Riley needed to keep their scorecard clear. But it was not meant to be with an unlucky 8 faults, pushing Monaco Aces off the top spot and into second place.

After two rounds, the top step of the podium was once again claimed by the blue and orange colours of Valkenswaard United. Second place went to the Monaco Aces, and third place to the Antwerp Diamonds. It is clear that the the overall battle for the 7.5 million euro championship prize is as close as ever, with just a three point margin at the top of the table. The League now heads to Paris for the 10th round of action in what’s turning out to be a fascinating competition.

Jan Tops, Co Founder of Global Champions League: "The new concept is totally different, you don’t have to be from the same nation. You have people you dream to be on a team with and you can’t because you have a different passport. But now you can compete together. It is up to the owner to decide who they want to pick in their team. Still Monaco Aces are in the lead but the gap is getting closer, we are just over halfway a lot of things can happen and that is the beauty of everything counting it is much easier for our followers."

Eduardo Menezes, Valkenswaard United: "I would be pleased if I was clear the first round but fortunately Bertram gave two strong clear rounds and my mare felt great. This format that everything counts, Bertram said to me ‘your mare is naturally fast so don’t go crazy just normal speed and we should be on the podium'."

Bertram Allen, Valkenswaard United: "I went first because my horse was a bit green. We wanted two good rounds in the second round and we did that and slowly, slowly we ended up climbing up and ended up winning.”

Schuyler Riley, Monaco Aces: "My horse jumped great today and Daniel put us in a great position going into the second round and I felt pretty good starting out. But anything can happen and that is what makes this sport so exciting. Every second, very jump counts and it almost went horribly wrong for us!"

Daniel Bluman, Monaco Aces: "We really wanted to win here but it is very difficult to go in the position Schuyler was, going in last and a lot of pressure. I’ve been in that situation before and wasn’t very lucky myself either, so I really to put up a good time and clear round to make it easier for Schuyler. Although we had two rails down, the times were good enough for second place so we are happy to still be leading.”

Jos Verlooy, Antwerp Diamonds: "I think it was a very good build today, the course jumped very good. We just didn’t win! But I am happy it is a good result and we just have to catch up with our biggest rivals Monaco Aces and Valkenswaard United still on top."

Audrey Coulter, Antwerp Diamonds: "It is really exciting. It is fun to have a team-mate, you really get into it and strategise together. It is really different."