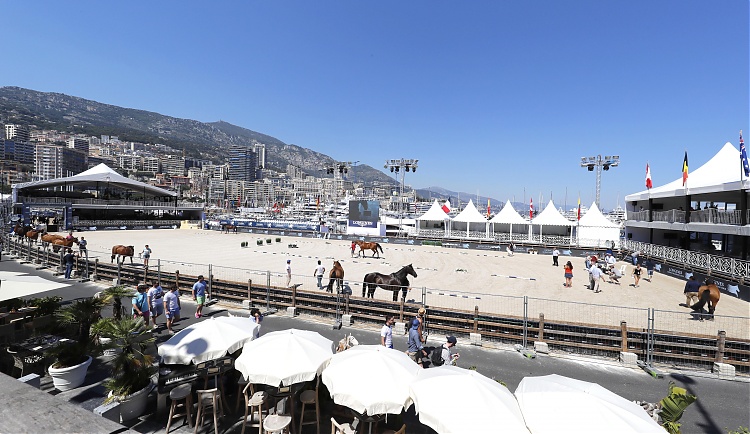 The Global Champions League championship is hotting up by the day as the teams look to Monaco for round nine of what is already turning into a close and exhilarating battle for the top spot in the rankings. With temperatures rising, the 12 teams have shifted up a gear as the League gallops past the midway mark in the season, with every point counting in the overall Championship ranking. Nestled between the super yachts and the Formula 1 pitlane, the intimate sand arena is the smallest on the League, with agility, speed and scope key to a successful result in the prestigious Monte-Carlo destination. Kicking off at 13:15 local time this Sunday 26th June, pressure is building for all the teams - specifically the Monaco Aces, who will be looking for another strong result on home turf.

Following their spectacular win in Cannes, GCL Ranking leaders the Monaco Aces will be battling it out for another strong result at the Principality this weekend, with the experienced Daniel Bluman teaming up with U25 rider Lisa Nooren for the first time. This will be Lisa’s debut on the League, a concept she’s excited about: “It’s so much fun that we have a team competing with different nationalities - it’s not something we get to do in our sport.” Talking about what the League offers to U25 riders, she said, "It gives us young riders the opportunity to ride at venues like these - to be able to compete against those 5* riders is a great opportunity."

The Monaco Aces currently sit on a points tally of 190 and will hope to keep hold of the prestigious leader armbands following Sunday’s competition. They have been one of the most consistent teams on the Championship so far, finishing in the top four in all but one of the rounds. The pressure will be sky high, as the Daniel and Lisa take centre stage in the small sand arena, with all eyes - including local fans and prestigious VIPs - on the home team for Sunday’s competition. Hot on their heels are Valkenswaard United who sit just 6 points behind. This weekend the talented and spectacularly speedy Bertram Allen will be in action alongside the experienced Eduardo Menezes, a combination not yet tried and tested for the team. With Bertram renowned for his ability in tight and challenging arenas, all eyes will be on the former leaders to see if they’ll knock the home team back off the top spot.

Just four points behind them in third overall are the Rome Gladiators, who currently have 180 points. This weekend will see Laura Renwick team up with Marlon Zanotelli once more, a combination who found success in Chantilly, claiming the silver medal for the team. The Antwerp Diamonds will see the winning combination of Audrey Coulter and Jos Verlooy back together again for this round of competition, with the young combination strong contenders for the podium this weekend.

The Paris Jets will see the formidable combination of Rolf-Göran Bengtsson and Nicola Philippaerts, with the pressure on to carry the team momentum through to this weekend following the team’s Silver in Cannes. Ahead of their home event next weekend in the Capital of France, the team will be looking to gain more valuable points in the overall ranking, where they currently sit on a tally of 142 points. Doha Fursan Qatar are just one point ahead on 143 overall, and this weekend will see Bassem Hassan Mohammed, a former Longines Global Champions Tour Grand Prix of Monaco winner, teaming up with Faleh Al Ajami.

The magical back-drop of Port d’Hercule and the Prince’s Palace in Monaco will provide a spectacular venue for the 9th round of the Global Champions League. The team competition will be the finale in a three-day feast of world-class show jumping alongside the world-famous harbour of Monte-Carlo, and will deliver fantastic entertainment for all as the series gallops past the halfway point.

Team tatics and strategy will come into play as the best international riders and horses face challenging technical courses in one of the smallest arenas on the calendar. The enchanting Riviera location and luxurious facilities at the Monaco event combine to deliver a stunning experience for families, VIPs, sponsors, owners and riders. Monaco, which also plays host to Formula One and ATP Masters tennis, is a hub of sport with many high-profile fans in attendance. Over the years, HH Prince Albert II of Monaco and members of the Royal Family have joined business leaders and celebrities to cheer on the riders during the LGCT weekend.

Miami Glory will see the impressive duo of World Number 5 Scott Brash and Georgina Bloomberg in action once again and keen to score more valuable points in the Championship battle. Another experienced duo will be the combination of Lauren Hough and Danielle Goldstein for the Vienna Eagles, with the top US rider so far the anchor for the team. Cannes Stars will see the young combination of Roosje Brouwer and Kevin Jochems together again, with the pair adding to the team's tally of 159 points following a strong podium in Chantilly.

Pilar Cordon will be in action once more for the Cascais Charms, with U25 rider Philip Houston also back in action for the team in Monaco. Jessica Springsteen will team up with Janne-Friederike Meyer for the Shanghai Swans and Madrid in Motion will see the combination of Athina Onassis and Gonzalo Anon Suarez joining forces in what promises to be another stunning round of competition.