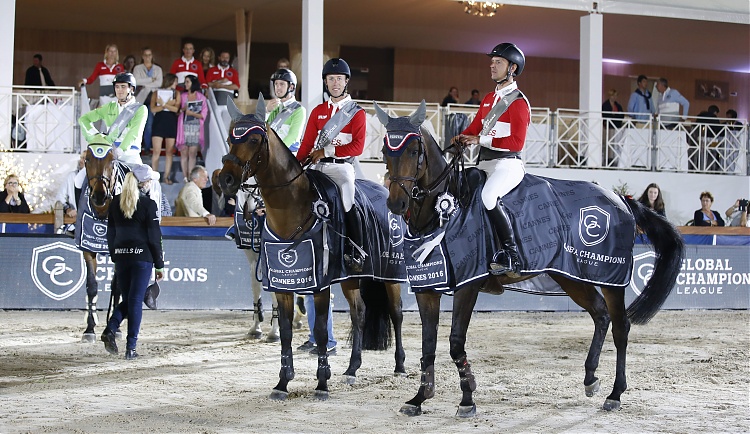 It was a spectacular finale to a three day festival of show jumping, as the Global Champions League of Cannes took place under the spotlights in the beautiful French Riviera destination. The eighth round of competition in the 2016 championship saw the twelve teams battling it out in front of packed grandstands, with VIPs and international guests watching on as the class played out in the intimate sand arena. The Monaco Aces were the only team to stay clear all the way through, hitting the jackpot with an emphatic victory in another scintillating round of the Global Champions League championship and shooting into the ranking lead ahead of their upcoming home event in two weeks' time.

The squad have proved consistent all season, securing two podium places already however had yet to reach the elusive top spot of the podium. Tonight the Aces pulled it out of the hat, with a sensational win during a warm, sultry evening on the French Riviera. Represented this weekend by the experienced Dutch duo of Maikel van der Vleuten riding VDL Groep Quatro, and Leopold van Asten on VDL Groep Miss Untouchable, the pair triumphed with the only two double clears of the competition. The team now sits on a tally of 190 points overall, six points clear of former leaders Valkenswaard United, and 10 points clear of the Rome Gladiators who currently have 180 points overall. The pressure mounts for the Monaco Aces' to maintain their top spot on the leaderboard as they head to the next leg of the Championship and their home event.

“Of course, if you know you have to do a clear round it gives you a bit of pressure,” said Maikel, who delivered one of the winning rounds. “Tonight was exciting under the lights. Now the win is there, we are all happy.” Teammate Leopold talked about the intensity of the competition and the pressure of riding in a team : “I was getting very nervous – I prefer to ride than to watch!”

Finishing second on Saturday night on the second successive leg on French soil were the Paris Jets’ Olivier Philippaerts with H&M Challenge v. Begijnakker and Gregory Wathelet with Coree who finished on a team total of eight. Both riders opened with clears but returned with four-fault rounds. Third with 13 faults combined were the Cascais Charms’ duo of David Will with Quincy and Pilar Cordon with Lennox Luis, with the result putting the team up to sixth overall.

Following the galloping grass arenas of Mexico City, Hamburg, Madrid and Chantilly, the teams were faced with a new challenge with the intimate Cannes sand arena, measuring 75m x 55m in total, best suited to horses quick on their feet and agile in their turns.

Formidable heavyweights and talented young riders lined up for the first round in the eighth leg of the championship, and the high-scoring evening made for an enthralling competition and an electric atmosphere as team rivalries sizzled.

The three podium finishers each finished round one on a zero score, with the Paris Jets quickest, leading the way from the Monaco Aces then the Cascais Charms. Three teams followed on four faults. There were 10 individual clears in total in the opening round and other stand out performances came from Kimberly Prince of Miami Glory, who jumped clean bar a time-fault, and Bertram Allen produced a typical high speed attacking clear for ranking leaders Valkenswaard United. Under 25 rider Paris Sellon, teamed up with her trainer Lauren Hough and impressed with a clear to put Vienna Eagles in fifth after round one.

There was a blow for home side Cannes Stars, however, who failed to make the cut after round one – Roger Yves Bost and Sunshine Du Phare finished on a total of nine faults despite the best efforts of Marco Kutscher and Clenur, who came home with just one time fault.

Rob Jansen’s fences were noticeably bigger going into round two, and the track finished once again with a treble combination where faults came far more frequently, dashing the hopes of several teams. Clears remained elusive from the teams’ opening riders until Leopold van Asten of the Monaco Aces’ stylish, clean jumping with a quick time rocketed them to the top of the score board. The Paris Jets’ Gregory Wathelet and David Will of the Cascais Charms each toppled a pole to leave them on team scores of four with the final riders to come and anticipation building in the crowd.

Rome Gladiators, winners in Madrid, had looked in trouble when Laura Kraut and Confu collected 12 faults in round two, but the “other” Laura, Laura Renwick, secured a team fourth with a smashing clear on the eight-year-old MHS Washington. Fifth place was earned by the youngest team of the night, 20-year-old Bertram Allen and 17-year-old Emily Moffitt, representing Valkenswaard United, finishing on the same team total of 16 but just a touch off the Rome Gladiators’ time.

Supporters were out in force and tensions rose as the final three riders entered the ring. With two teams snapping at his heels on four faults, Maikel van der Vleuten required a clear for victory. Tension built as first of the final three to go Pilar Cordon entered the ring with Lennox Luis, with the pair fighting for an elusive clear. However two down and a time-fault put the Cascais Charms on a team score of 13, dropping them to third. Every breath was held as Maikel faced his final challenge. Several poles rattled, making for some heart-stopping moments, but the pair flew home as their teammates cheered and hugged, with the second clear of round two, another double clear and victory for the impressive Monaco Aces; only the second time a team has finished faultless.

Last to go, Olivier Philippaerts knew he couldn’t win but, needing a good result to push the team up the table, rode a masterful round on four faults, meaning the Paris Jets would claim the silver medal.

So the Monaco Aces led the dazzling lap of honour in Cannes to the applause of the crowd, ahead of the Paris Jets and Cascais Charms. In the overall standings, Monaco Aces have now leapt ahead, overtaking the Valkenswaard United, and sit on a points tally of 190 points overall. As the League now looks to round 9 and Monaco, the pressure will be on the home team to keep their top spot, with the rest of the field snapping at their heels as the overall ranking battle challenge gallops past the midway point in the season.

Jan Tops, Co Founder of the Global Champions League: “That’s the interesting part, there’s no drop score, so no-one can have a bad round. But on the other hand if you’re going clear you move up really quickly. It’s only the second time after Hamburg that a team has had a clear round so it’s very difficult that they all jump a clear. The course may not be as big as the Grand Prix, but the course builder is very smart in the way he puts the fences. The scoring is getting closer and closer - Monaco lead, and the next leg is in Monaco and their home event. Still five or six teams are contenders in the overall rankings so it’s very exciting.”

Francois Bourey, President Jumping Cannes: “I’m not that happy because Monaco beat Cannes! Haha! But no, it was very nice; for my part, I love team competitions and the idea is very good. It is our first experience of it here in Cannes and it has been very successful for the Monaco team. Save the date for next year!"

Leopold van Asten, Monaco Aces: “I know Maikel and the horse very well so you try to help them as much as possible, not that he really needs it! But I tried to tell him where on the course it was difficult and where he needed to pay a little bit more attention. Today it worked out very well. You need decent horses to jump these courses and we both did today, and with the luck on your side, you can win.”

Maikel van der Vleuten, Monaco Aces: “Some riders make faults from the pressure, but it makes me sharp. The pressure was there today as I needed a clear round to win. We have five good riders in the team and it’s important we send the right horses and riders to the show and so far we can stick with the plan.”

Gregory Wathelet, Paris Jets: “We had a good result in Shanghai but the rest were not so good. But we were very motivated and we came here with two good horses. There were many faults in the second round - but I think Olivier and I did a good job today, and we are really happy to be second place.”

Olivier Philippaerts, Paris Jets: “We know each other quite well. Today our result was good enough for second place, and hopefully in the next few shows we can climb up the ranking a little bit.”

David Will, Cascais Charms: “We had a great day today; I am with a different partner this time but it was a pleasure riding with Pilar. At the end we had a few too many faults but we are very happy to be third. We were a lot more successful this time than the last time we rode together – we’re moving up!”