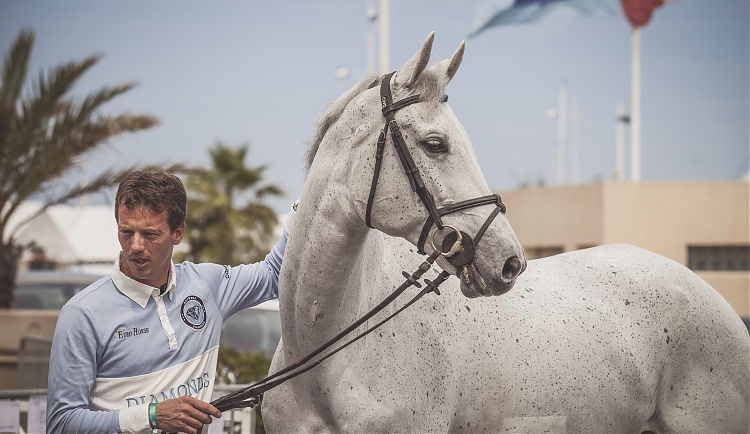 As the temperatures rise in the stunning French Riviera destination of Cannes, the riders for the Global Champions League team competition watched on in anticipation as the team starting order was drawn at random. For the eighth round of competition in the GCL season championship, teams were looking for late start times, the optimum position for any rider with the opportunity to spec out the competition and play to the team’s strengths.

The Global Champions League of Cannes will kick off at 22:00 local time tomorrow 11th June, and this will be the second time the Championship heads to France to battle it out in front of a passionate and knowledgeable local crowd. Drawn at random earlier today, the team order start list for Saturday is as follows:

As the Global Champions League gallops past the mid-way mark in the season, the teams will field their heavyweight riders for the 8th round of action in the 2016 Championship in Cannes. Taking place under the floodlights on Saturday evening, the twelve teams will field their top combinations in the stunning French Riviera destination, with anticipation growing as the overall ranking points battle intensifies.

One of the stand out features of the Global Champions League series is the unique mix of locations and diversity of competition set up. Following the galloping grass arenas of Mexico City, Hamburg, Madrid and Chantilly, the teams will face a new challenge with the intimate Cannes sand arena, measuring 75m x 55m in total, best suited to horses quick on their feet and agile in their turns. Tactics, strategy and team decisions will become ever more crucial as the GCL returns to French soil for the second time in the season.

All eyes will be on the home team, the Cannes Stars, who will field their heavyweight riders this weekend. Top French rider Roger-Yves Bost unites once more with Germany’s brilliant Marco Kutscher, a highly respected pair who will be a formidable team for the local crowd to support and cheer for. Talking about the concept, Marco said: “I think a multi-nation team is something unique, something really special. We haven’t had this in our sport and it makes it even more interesting. It’s fun. For the under-25 rider it is a great chance to develop themselves and to get help from the other team members with more experience.”

GCL Ranking leaders Valkenswaard United with field their young stars, with Bertram Allen teaming up with Emily Moffitt for this round of action. Valkenswaard United sit on 164 points overall, just four ahead of second place team, Monaco Aces, who will be hot on their heels a few meters from the Croisette. The experienced combination of Maikel van der Vleuten and Leopold van Asten will unite to compete for the team this weekend, with a strong result potentially knocking the long-term leaders Valkenswaard United off the top spot.

Also looking to jump back up the rankings will be the Antwerp Diamonds, with the team fielding the strong duo of Audrey Coulter and Harrie Smolders once more. Currently in fourth and with a points tally of 155 overall, a good result here will shoot the Diamonds back up the rankings where they have sat for most of the season so far. The combination of Audrey and Harrie is a strong one, with the pair taking the silver medal in Miami Beach, silver in Hamburg and bronze in Madrid, and with their experienced horses Bokai and Alex in action this weekend, they look to be a force to be reckoned with at the Cannes event.

The Rome Gladiators leapt up to third and sit on 157 points overall following their sensational win in Madrid, and second place finish in Chantilly - the winning combination of ’team Laura’ will be back on show, with the speedy Laura Kraut and Laura Renwick taking centre stage this weekend. Another winning combination in action this weekend will be Madrid In Motion’s duo, with GCL Chantilly gold medallists Pedro Veniss and Gonzalo Anon Suarez teaming up once more and looking to carry their momentum through to the glittering Cannes event.

It’s set to be a fascinating competition next to the Mediterranean ocean with an international audience watching on from all around the sand arena as the battle unfolds.

Top Belgian rider Gregory Wathelet will team up with young talent Olivier Philippaerts once more, with this combination for the Paris Jets proving their high calibre teamwork after they won silver in Shanghai earlier this year. Miami Glory will see World Number 5 Scott Brash unite with Kimberly Prince, another experienced pairing who will be looking for more valuable points in the Championship this weekend.

The Vienna Eagles will field another strong combination who know each other inside out; Lauren Hough will compete with Paris Sellon, a pair who have trained together previously and will undoubtably be able to play to each other’s strengths in Cannes. Ben Maher and Jessica Springsteen will be the combination for the Shanghai Swans, and with Ben’s history of success in the intimate sand arena, these will be a pair to watch on Saturday evening. David Will will hope to continue his recent run of form, teaming up with Pilar Cordon for the Cascais Charms and Doha Fursan Qatar will see Bassem Hassan Mohammed and Ali Al Rumaihi back in action for this round of nail-biting competition in the 2016 Global Champions League championship.