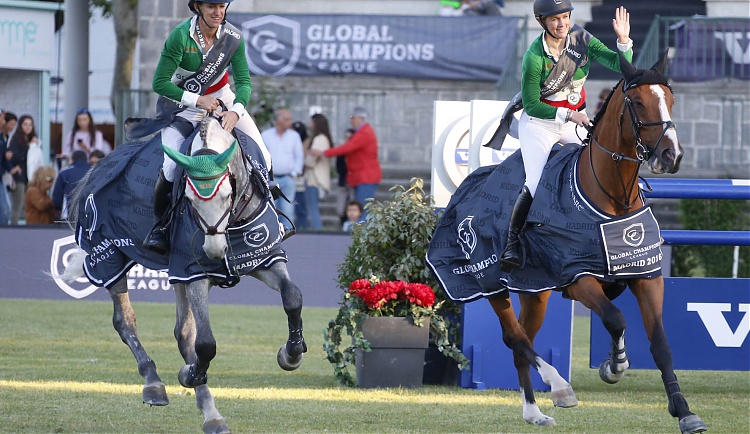 It was a battle of gladiatorial standards as the twelve teams took to the stunning grass arena for the Global Champions League of Madrid, as the points ranking tightened dramatically during the sixth leg of the 2016 Championship fight. With adrenaline running high in the picture perfect setting, it was another showcase of top sport and entertainment right until the final fence, with the magnificent Rome Gladiators - consisting of Laura Kraut and Laura Renwick - who reigned supreme.

An ecstatic Laura Renwick, who jumped double clear with Bintang II spoke of the pressure in the final round, "After Laura did such a great job I just tried to go as fast as I could and leave the jumps up, and it worked today!” And teamwork it was, as both 'Lauras' took the Gold Medal for the Rome Gladiators, their first win of the season so far and rocketing them up the rankings to fourth place overall with a tally of 130 points.

Talking about the strong camaraderie in the team, Laura Kraut spoke of the Rome Gladiators U25 rider Emma Heise, who was also at event this weekend: “We have Emma as one of our teammates - she’s our U25 rider. She walks every course, she follows every rider [in the competition], she keeps track of everything - she’s been great.”

The overall ranking points have closed up once more, with Valkenswaard United still at the top of the table on a full 145 points overall. The Championship rankings have tightened dramatically, with the top three teams all within just four points of one another, with Monaco Aces in 142 points overall and the Antwerp Diamonds hot on their heels with 141 points. With 30 points up for grabs for a win, it’s set to be an action pack season as the League heads to the next destinations in the European phase of the Championship - Chantilly, Cannes, Monaco and Paris.

Fans packed the arena to witness the League take place for the first time in the Spanish city of Madrid, cheering passionately as the riders took centre stage, and dancing to the bespoke team music which resonated around the Club de Villa de Madrid. VIPs including Bruce Springsteen who spent time at the show with his wife Patti watching their daughter Jessica Springsteen compete in the Shanghai Swans with team mate Edwina Tops-Alexander. "The Boss" joined guests to watch the high calibre competition following his performance last night in front of tens of thousands of fans in the City as part of his "The River" tour.

A tough first round saw many of the world’s top riders and horses caught by the challenging 1.55m course. GCL Ranking leaders were failed to qualify for round two after a fence and time fault for John Whitaker and his horse Lord of Arabia, plus a rub of a pole from Bertram Allen and Quiet Easy dropped them out of the running. Doha Fursan Qatar’s Hamad Ali Mohamed A Al Attiyah had an unlucky fall from Appagino 2, meaning the team would be eliminated from the competition, and Vienna Eagles just missed out of qualifying for round two after picking up 8 faults from Danielle Goldstein, with team mate and GCL debuting U25 rider Paris Sellon jumping a strong clear.

The Monaco Aces of Daniel Bluman and Schuyler Riley looked to be on phenomenal form throughout the competition, leading the way into round two on a score of zero with both riders clear. They were joined by the Shanghai Swans who put in a stunning opening round with riders Edwina Tops-Alexander and Jessica Springsteen, Rome Gladiators and the Cannes Stars - all on a score of zero and under pressure to jump round two fast and clear with combined time crucial to the finishing positions.

As the bell rang, team Miami Glory took centre stage as the first team to test out the new course layout. The team carried through four faults into round two, with Georgina Bloomberg jumping a sensational clear with her 10 year old bay mare Calista. The pressure was on team mate and World Number 3 Scott Brash, who looked to be on fantastic form until an unlucky couple of fences caught the pair out, taking the team total to twelve.

Cannes Stars top German rider, Marco Kutscher, provided a careful clear round with his 10 year old bay gelding Clenur, picking up just one time fault. Team mate Roger-Yves Bost pushed his horse Sunshine du Phare to be within the time allowed, however was caught out by a rail costing the team four faults in total, placing them on a final score of 5.

Edwina Tops-Alexander provided the anchor double clear for the Shanghai Swans, with team mate Jessica Springsteen the second to last rider to go as the pressure mounted. After a stunning first round, Jessica rode the 14 year old bay gelding Vindicat W beautifully, but the galloping course with demanding 1.55m verticals and wide oxers tested the best and cost the team 12 faults.

As the Rome Gladiators watched on in anticipation, it was all down to the last and final rider to go; Daniel Bluman of the Monaco Aces. With a score of zero faults so far, the Columbian rider knew he had to jump clear and careful to win the League, however a pole down could drop them far down the order if his time was too slow. Midway through the course, the pair caught a pole, and Daniel moved his 10 year old bay gelding Believe up a gear to make up the time difference and be in with a chance of winning. But the galloping pace took its toll, and as they came to the last the pair caught the top rail, crossing the line in a combined time of 142.48s but putting them on eight faults overall and fourth overall.

The Global Champions League now looks to the chic destination of Chantilly, another historic venue on the 15 event Championship as teams battle it out in the intense points ranking.

Jan Tops, Co-Founder Global Champions League: “To be here in this magnificent place - it’s amazing to ride at, the crowd is unique. Alvaro and Oxer organised Mexico and we can see the Latin flavour, the warmth all the time from the spectators is great until the end, and that’s nice to see for the riders - they try very hard here. We have also been blessed with these two shows with the weather and circumstances which were of course fantastic. You see more and more that the riders take this competition very seriously - everything is very close, they’re putting their best horses in and I think today was a great win for both ‘Lauras'. They stayed cool until the end, especially with the last two teams having to jump clear. The riders want to do their best - they don’t want to let their sponsors and team riders down. The pressure is unique for this competition but the riders are the top [in show jumping], so it’s great for the sport. [In GCL competitions] you can count everything - all the points count until the end and there is no drop score; so everything stays open. It’s easy to follow. Now the team who are number one can in three shows be number five or the other way around. I think this is much better for all of us, for the fans, who can follow the competition to the end. There are only three points between first and second, and with nine more GCL legs coming everything is still open with many teams still with a chance to win.”

Alvaro Arrieta Konyay, CEO Oxer Sport: “First of all congratulations to the six riders who are at this table - it was a really exciting competition today. Thanks to my friend Jan for his confidence and trust in our committee; it was the first time for the League in Madrid. As you know we organised six weeks ago the show in Mexico City, so it is not a new competition for us as such, but you always have butterflies in your stomach. The riders and horses did really well - it was a beautiful competition and we are really happy and we hope the League keeps coming to Madrid. It’s a very nice competition and we hope Jan keeps improving and building this sport, and all of us should support the new competition.”

Laura Kraut, Rome Gladiators, GCL Madrid Gold Medallist: “I was so happy with [Confu]. He’s a relatively new horse for me and I thought he rode both rounds really well. I said to Laura that I didn’t even know I had the fence down until I heard the crowd groan, and then I looked at the scoreboard and saw four, so I thought I better take the brakes off and get going! I’m really happy with him - he’s good for this competition, it’s great experience for an up and coming horse."

Laura Renwick, Rome Gladiators, GCL Madrid Gold Medallist: “I thought [Bintang] got better even in the second round than the first - the size of that ring really helps him, he’s got a huge stride and I could just use that to my advantage in the second round. After Laura did such a great job I just tried to go as fast as I could and leave the jumps up, and it worked today!"

Marco Kutscher, Cannes Stars, GCL Madrid Silver Medallist: “First of all well done to the two ladies! I’m very happy with my horse I have to say. We both chose perhaps the slowest horses of the competition so we were not trying to be fast. I had the time fault which I counted on in order to try and be clear. Normally, and with a little bit more luck we would have won the class. But we’re very happy. I expected us to be fourth [after the pole down] but as Jan said, every result counts, so it was very exciting the last two riders - there’s always something happening!"

Roger-Yves Bost, Cannes Stars, GCL Madrid Silver Medallist: “Marco rode better than me today - I had one down, the course was a little difficult today with not many clear so I’m very happy with the result."

Harrie Smolders, Antwerp Diamonds, GCL Madrid Bronze Medallist: “I chose Aiyetoro to ride as he was in good shape these past few weeks. That’s why we brought him here. We changed our tactics a little bit to put myself as first and Audrey with Alex as second because I think with her horse we have a few more options to see how the course is going, and she can make up more time. It almost bought us victory today.”

Audrey Coulter, Antwerp Diamonds, GCL Madrid Bronze Medallist: “I think [GCL] is a lot of fun. Alex is the perfect horse for this type of class as he is fast and very careful so he’s been able to succeed every time he’s competed in this class, so it’s been fun.”