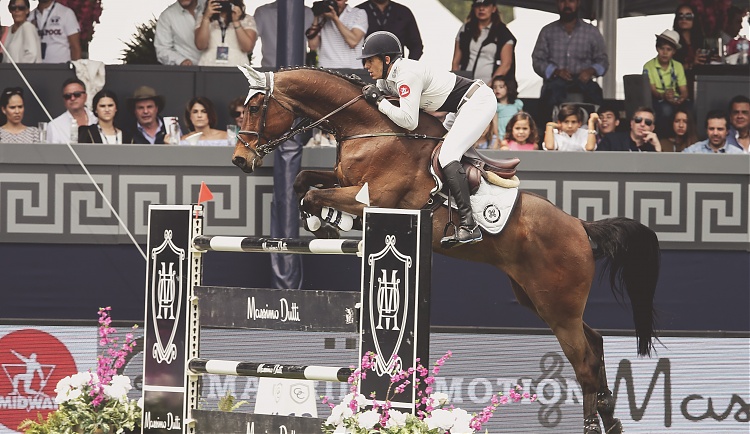 Battle is on as big guns head to GCL Madrid

This weekend promises yet another intense showcase of sensational show jumping and nail-biting action as the Global Champions League picks up pace in the 2016 Championship season. Round six of the exciting GCL team competition will take place this Sunday 22nd April, in the stunning Spanish setting of Club de Campo Villa de Madrid, with the teams fielding impressive combinations of riders all looking to bring home valuable points in the overall ranking. Kicking off at 18:00 local time, passionate fans will be able to witness the stars of show jumping united like never before, up close and personal, and battling it out for their teams in the historic venue.

Tactics will come into play as the League hits a third of the way through the 2016 Championship season, with teams fielding riders and horses best suited to larger galloping grass arenas and cheering crowds.

So far, the magnificent duo of John Whitaker and Bertram Allen for Valkenswaard United, a combination with over 40 years difference in age between the two riders, are leading the way on an impressive tally of 130 points in the GCL rankings. This weekend will once again see the formidable duo back in action, and undoubtably looking for a repeat of their successful strategy with John the safe, clear anchor, and Bertram the speed demon. With wins in Miami Beach and Hamburg, the team

Hot on their heels are the Monaco Aces, who currently sit in 2nd with 119 points overall. This weekend will see the team field Daniel Bluman, fresh from his bronze medal at the LGCT Hamburg, and Schuyler Riley, another consistently strong rider on the League. Just three points behind are the Antwerp Diamonds, who finished second at the last event in Hamburg. The ever consistent Harrie Smolders, who has jumped clear in every round of the GCL championship he’s competed in so far - making him one of the most valuable team players - will be back in action, and joined by Audrey Coulter who has helped the team secure a win in Antwerp, and strong second places in Miami and Hamburg.

Home team Madrid in Motion will be looking for a strong performance in front of a passionate local crowd, with Athina Onassis and local favourite Gonzalo Anon Suarez called up for this important round in the Championship. Gonzalo in particular will feel the extra pressure, with legions of fans and support expected to cheer him on from the city in which he now resides.

The Cascais Charms will field their GCL Shanghai winners, young talents David Will and Andreas Kreuzer; a tight-knit pair who will be hungry to raise the team back up through the rankings after a challenging time in Hamburg cost them points. Rome Gladiators bring back the two ‘Lauras’, with Laura Kraut and Laura Renwick another strong and speedy combination for the competition this weekend. Miami Glory will see World Number 3 Scott Brash back in action alongside Georgina Bloomberg who has looked to be on fantastic form at recent shows, with double clears and placings on the LGCT.

Shanghai Swans will see the impressive combination of Edwina Tops-Alexander and Jessica Springsteen, a duo who know each other’s strengths and talents inside out, and will undoubtably be ones to watch this weekend. Paris Jets will welcome the GCL Shanghai Bronze medallist combination of World number 7 Gregory Wathelet and Olivier Philippaerts - a pairing that impressed with their strengths of speed and consistency.

U25 rider Paris Sellon will make her debut on the League this season for the Vienna Eagles, united with Danielle Goldstein, a rider who has competed in three of the six events so far. Doha Fursan Qatar will field LGCT Grand Prix of Monaco winning Bassem Hassan Mohammed and U25 rider Hamad Al Attiyah and Cannes Stars will be pulling out the big guns once more with the formidable duo of Marco Kutscher and Roger-Yves Bost.

The full team riders for the GCL Madrid are as follows:

Madrid’s exclusive country club, the Club de Campo Villa de Madrid, will host the Global Champions League team competition at its equestrian centre, where the best riders and horses in the world will compete in the stunning grass arena. The elegant Club de Campo Villa de Madrid is a well-known venue in the city and an important hub for those passionate about equestrianism.

With excellent equestrian facilities and two golf courses - including one designed by the late Seve Ballesteros - this unique venue brings together elite level competition and the glamour of world-class show jumping in the historic Spanish capital. The show ground is only a few kilometers from the famous monuments and architecture within the heart of the city, including the Plaza de Cibeles, with its stunning Cibeles Fountain.