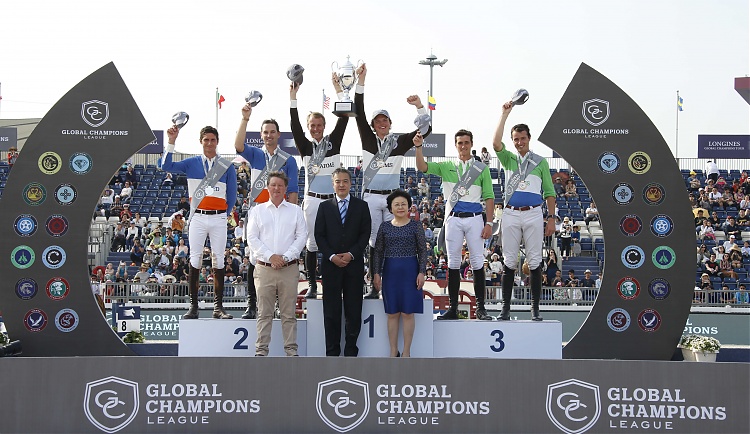 It was another phenomenal round of intense action with the competition down to the wire in Shanghai as the Global Champions League made its fourth stop on the 2016 Championship. 25 year old Andreas Kreuzer (GER) teamed up with 27 year old David Will (GER) for the first time to represent the Cascais Charms and the pair delivered a flawless performance over the two round class to take a magnificent win. It was Andreas’ debut on the League, and speaking about the unique opportunity to compete on this level, Andreas said: “It’s an unbelievable experience for all of us. It’s a totally different feeling to ride in this type of competition."

Olivier Philippaerts (U25) for the Paris Jets, a team sponsored by the dynamic membership-based private aviation company Wheels Up, helped raise the team up to third with an impressive double clear and speedy second round time. Experienced team mate and World Number 6, Gregory Wathelet (BEL), who has ridden in every competition so far, spoke of the exciting action the League delivered, saying “it was [down] to the last rider at the last jump - there was pressure on him - for the public it is really good to follow. It’s what the public wants and that’s the good thing about the League.”

The overall championship is still wide open and despite a strong lead by new ranking leaders Valkenswaard United, the competitions so far have shown how quickly the order can change, adding to the excitement and drama of the new series.

Earlier today World Number 3 Scott Brash (GBR) featured in the live GCL TV studio, and spoke about the huge support for the Global Champions League and what a difference the new concept has done for the sport: “It’s important the sport doesn’t stand still. [Jan Tops] has always got new ideas, new concepts, and that’s great for us riders here. It’s great for the audience, it’s great for the public and it’s great to be a part of - I hope he keeps bringing up these new ideas!”

Monaco Aces Schuyler Riley (USA) joined Scott in the studio and agreed: “[Global Champions League] is the future of the sport. It makes it more exciting, it makes it more appealing for people to get involved and get behind, for sponsors to get behind. There’s more exposure - it’s a lot more fun and exciting; for the riders, the sponsors and the spectators."

And exciting it was as the Global Champions League of Shanghai kicked off, with this unique location the backdrop to the action. The sport of show jumping has grown impressively in China since the LGCT arrived three years ago, with the number of equestrian clubs growing from 300 to over 800 in the region. Four Chinese riders took part in the event in Shanghai this year and more are expected to compete in the future as the sport continues to grow year on year. 11 Global Champions League teams lined up for the Asian leg of the Championship, with Antwerp Diamonds looking to defend their Ranking lead of two points over Valkenswaard United and Monaco Aces.

The first round course put forward enough challenges to test many of the best in the sport, with a few caught out by the tricky combination element. As always, the combined faults of the team riders would determine their place after the first round with the top eight going through to round two. Doha Fursan Qatar put in a strong opening performance, with Sheikh Ali Bin Khalid Al Thani with Anyway II and Faleh Suwead Al Ajami with Come Soon both clear after round one. Joining them were Monaco Aces’ duo of Maikel van der Vleuten with VDL Groep Quatro and Leopold van Asten with VDL Groep C Tara Z, who looked on fine form as the competition unfolded. Andreas Kreuzer of Cascais Charms put in a faultless performance with Zerafina and team mate David Will did not disappoint despite the pressure with his horse Monodie H, meaning they too would progress through with a score of zero.

Enthusiastic crowds cheered the riders over every fence, as the teams put on a fantastic display for the watching public. The brightly coloured team shirts made it easy for spectators to follow, with many local fans waving Shanghai Swans flags in support of their home team. Around the world, the pressure was on as team mates of those competing watched via the GCL TV live streaming.

Eight teams went through to round two, with Antwerp Diamonds, Vienna Eagles and Miami Glory relegated from the next stage of the competition. Roosje Brouwer with van Helsing of Cannes Stars had jumped clear in round one, however picked up an unlucky four faults to add to the one time fault from team mate Marco Kutscher’s earlier round. The Paris Jets carried through four faults, but a blindingly quick clear round from both Gregory with Eldorado van het Vijverhof and Olivier with H&M Henna de Goedereede meant they finished on a combined time of 142.66s. The Monaco Aces matched their fault score, but were slower on combined time, finishing in 145.11s and fourth overall.

The home team Shanghai Swans, who fielded two U25 riders of Jessica Springsteen and Alexandra Thornton each rode a beautiful second round - both clear and with just one time fault for Alexandra. This was added to the 9 faults they carried through, raising them back up to 7th overall.

David Will (GER) of Cascais Charms was the final rider of the day with his grey horse Monodie H. With the team completely clear so far, David went for a slow and careful round, knowing that one fence would drop them far down in the order and off the podium positions. As the crowd - and team mate Andreas - watched on completely spell-bound, David and Monodie H rode a beautiful round, clear and picking up just two time faults to put them on the top of the scoreboard.

The Global Champions League now heads back to Europe and Hamburg where the next highly anticipated leg of the championship will pick up pace. Valkenswaard United have re-gained the ranking lead with 100 points in total, just four points ahead of Monaco Aces who currently stand on 96.

Jan Tops, Co-Founder of the Global Champions League: “The concept is fantastic - you can see the tension [grow] to the last rider, even the last fence. It’s happened at the last four events, and it’s something everyone wants - tension to the last moment. I think every sport dreams of having this. It’s also fantastic that the teams are very diverse and different; everything is still possible, there’s not one team who dominates and all have a chance to win. Today it was fantastic that the Cascais Charms came back from behind, and are now in 4th in the rankings. The public understand, it’s easy to follow and [the Global Champions League] is great.”

Mr. Jiang Lan, Vice President of Shanghai Jiushi (Group) Co., Ltd. and CEO of Shanghai Juss Event Management: “I am pleased and satisfied with the overall performance of every single rider, and the excitement of the crowd. We’ve seen the great success of the event in the past few years and of course this year it is also a great success. This year with the arrival of this new Global Champions League, more people are enjoying this event. Personally, I believe the good weather, the great atmosphere and the great performance have been the success factors for this event. I’m a supporter of the Shanghai Swans team of course, due to the City of Shanghai - they didn’t win, but maybe next year they can win the title here!”

Andreas Kreuzer, Cascais Charms, 1st place: “It’s an unbelievable experience for all of us I think. It’s a totally different feeling to ride in this type of competition. I don’t know the last time I was that nervous to see someone else ride - watching the second round was just crazy, I couldn’t even watch any more! We are more than happy to be part of [the new Global Champions League], we are more than happy to have events ahead of us - we are looking forward to it and we’re going to fight until the end."

David Will, Cascais Charms, 1st place: “[Our strategy to go slow and clear] was quite nerve racking. We talked about it and agreed our tactics - we knew what was at stake. Luckily it worked out. I was lucky, Andreas always did a perfect first round, so I only had to follow up! This is the good thing about this competition, it’s really really exciting until the end, and until the last rider and last fence, for the spectators and the people watching. For me, I have no normal nerves now! For everyone else I think it was good to watch.”

Eduardo Menezes, Valkenswaard United, 2nd place: “It’s great. I think our sport was screaming for a change. This Global Champions League is giving us the opportunity of a completely new, exciting type of event and we are glad to be able to ride with great riders such as John [Whitaker], Bertram [Allen], Emily [Moffitt], Alberto and myself. We are glad we keep up [the results for the team]. Alberto had two amazing rounds, unfortunately I had one down in the first round. It was great to watch to the end, knowing that if [the Cascais Charms] had one down we would win. As Jan said, there is emotion right to the end of the class.”

Olivier Philippaerts, Paris Jets, 3rd place: “It was hard as the first three competitions didn’t go as well [for the team], so we knew we had to try hard this time. I think we did well, we’re in third place and our horses jumped well. It was a good day today.”