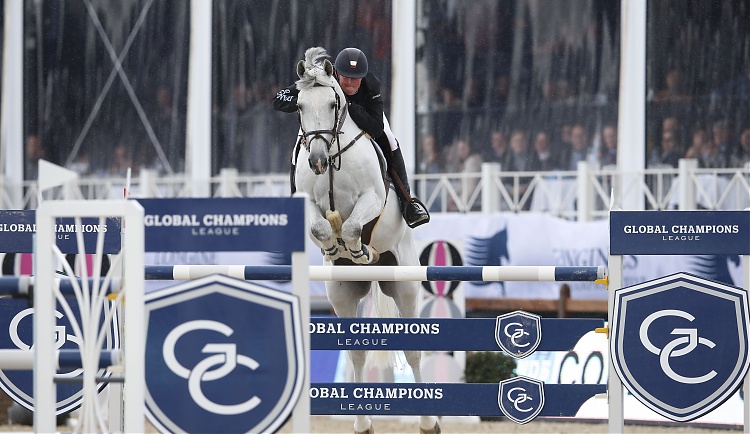 It was a glittering display of teamwork as Antwerp Diamonds shot to the ranking lead after stealing a sparkling win at their home venue for the third round of the Global Champions League. U25 team rider, and home hero Jos Verlooy (BEL) said “we came with the big guns - our aim was to win and we did, so I couldn’t be happier!”

The Antwerp Diamonds have taken the top spot on the team ranking leaderboard, coming away from round three on 75 points, just two points ahead of Monaco Aces and Valkenswaard United, who are tied on 73 points apiece. The battle for the lead has moved up a gear, and with the teams looking ahead to Shanghai for the fourth round of action, rivalries and strategy are beginning to show.

Donning their team jackets for the first time in the Championship, which sported personalised names, logos and team sponsors, the chilly weather in Belgium posed no problem for the twelve teams, all hot to compete for the first European leg of the League. Watched on by fans and VIPs, with many more tuning in via the GCL TV live streaming, the scene was set in the intimate sand arena, nestled next to the River Scheldt.

The first round course was tough, and set at the full 1.55m with plenty of turns to test the top riders and horses in the world. Just three teams jumped a combined clear in the first round; Rome Gladiators’ Laura Kraut (USA) with her experienced grey 18 year old gelding Cedric and Marlon Módolo Zanotelli (BRA) with the 11 year old stallion Rock'N Roll Semilly, Monaco Aces’ Schuyler Riley (USA) with her fiery chestnut mare Dobra de Porceyo and Daniel Bluman (COL) with his 11 year old stallion Conconcreto Apardi and Antwerp Diamonds’ Audrey Coulter (USA) with the 13 year old bay Domino and Jos Verlooy (BEL) with his impressive grey stallion Caracas. Pedro Veniss (BRA) with Quabri de l'Isle and Athina Onassis de Miranda with AD Cinsey also jumped clear, but picked up an unlucky time fault, leaving them on a score of 1, ahead of the second round.

Some big names failed to make it into the top eight teams, with surprises from all areas of the course. The experienced duo of Roger-Yves Bost (FRA), who rode Sangria du Coty, and team mate Marco Kutscher (GER) with Balermo, picked up four faults apiece, leaving them on a total of eight and unable to progress through to the next round. While top Belgian rider Gregory Wathelet (BEL) jumped clear with his superbly talented young 9 year old mare Lilly Lordanos for the Paris Jets, they were unable to progress to round two when team mate Rolf-Göran Bengtsson and his hot grey stallion Clarimo ASK had two down during their round.

The pressure was on U25 rider Jessica Mendoza (GBR) of Miami Glory rode a stunning round to jump clear with her 10 year old bay gelding Sam de Bacon, as team mate Scott Brash (GBR) and his 15 year old bay mare Ursula XII had an uncharacteristic 12 faults, placing them in the drop zone. Similarly Shanghai Swans’ Ben Maher (GBR) with Boomerang picked up 12 faults, and despite second-to-go U25 team mate Jessica Springsteen (USA) jumping a superb round with her talented 13 year old bay mare Davendy S, they too were excluded from the second round of action.

The next round had all the excitement of a jump-off with pace and time counting to the final result. The three teams on clear were fighting amongst themselves, vying for position but also conscious they needed clears to stay high on the leaderboard. The Vienna Eagles had a good round, with Rodrigo Pessoa (BRA) and Citizenguard Cadjanine Z lifting them up the order, however his combined four faults with team mate Lauren Hough (USA) and grey gelding Cornet 39 meant they would finish in sixth.

The Monaco Aces were looking hot to win, until Daniel Bluman (COL) crashed through the last fence, much to the groans of the crowd, had they jumped clear they would have won. John Whitaker (GBR) of Valkenswaard United showcased his anchor man role, jumping clear again with his top mare Ornellaia, while speedy team mate Bertram Allen (IRL) and his experienced grey mare Molly Malone gave it there all to push the team back up to second place.

Rome Gladiators focused on strategy, with their tactics to go slow and clear. All went well until Marlon clipped the back of the rainbow oxer - agonisingly their slow time dropped them back down the field, just shy of the podium and in fourth overall.

But it was the Antwerp Diamonds who reigned supreme. Audrey Coulter had one down in her round, meaning there was extra pressure on rising star Jos Verlooy, who galloped between the fences, and jumping clear - finishing on a combined four faults and an impressive 111.77s overall.

The League now heads to Shanghai for the fourth round of competition, next weekend in China.

Jan Tops, Co-Founder of the Global Champions League: “It’s the first time [GCL] comes to Europe. Now the Antwerp Diamonds are in the lead - it’s all very close but they have moved ahead. After four rounds, no one was totally clear so it was tense to the last riders. It’s always exciting to ride together as a team. Today was a little bit chilly, but it was nice as everyone likes our team shirts, and now they like our jackets!”

Eric Thoelen, President of Jumping Antwerpen: “We are honoured to have the GCL premier here in Europe. The first shows were in Miami and Mexico, and as a local from Antwerp I’m very proud that it has started here in Europe. I hope we were a great host and I hope you are back next year!”

Audrey Coulter, Antwerp Diamonds, Gold Medal: “It’s amazing to be at our home venue and to be winning is really great. We came close in Mexico and Miami, but Valkenswaard beat us, so it was good to beat them today! It’s exciting!”

Jos Verlooy, Antwerp Diamonds, Gold Medal: “It’s special - I live just 20 minutes from here. We came with the big guns - our aim was to win and we did it, so I can’t be happier. It’s great to have the support here, I know 50% of the people who are here at the show, so it’s super to win for them here.”

John Whitaker, Valkenswaard United, Silver Medal: “Miami was great, we had a great start. Then we had a blip in Mexico. But we came back strong today - we were sixth after the first round, so we fought hard and worked our way back up. To finish second is good, and to be second overall is very good. So I’m happy!”

Bertram Allen, Valkenswaard United, Silver Medal: “I’m loving riding with [John Whitaker]. He’s pulled me up twice now as I’ve had one down here and at Miami, so he’s keeping the side up and I’ve got to try a bit harder next time!”

Schuyler Riley, Monaco Aces, Bronze Medal: “I was really excited to come here and be amongst this group and this League. There’s nothing like it. It’s an amazing event, an incredible opportunity and I’m proud to be here, representing Monaco Aces.”

Daniel Bluman, Monaco Aces, Bronze Medal: “As Jan says, you can start to feel the tension as the scores start to add up. I know I wanted to jump a clear round, which would have put a lot of pressure on Marlon {of Rome Gladiators} and I got overly greedy to the last jump, tried to protect the front rail and nearly ended up seeing myself on the ground!”