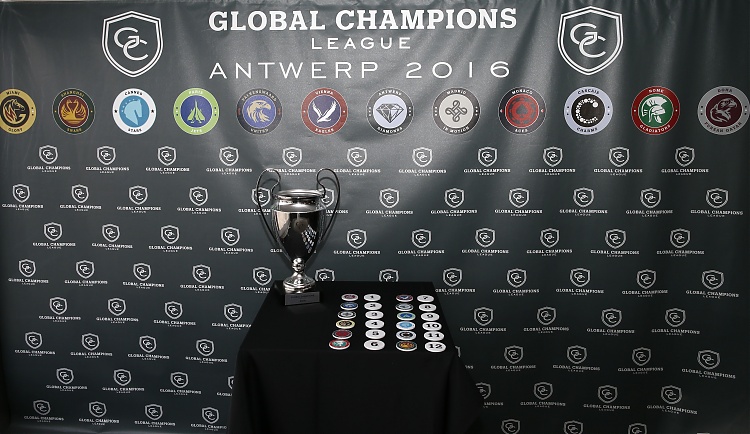 Earlier today, the draw to determine the team order took place - watched on by members of the press and team members, with the starting results as follows:

Once more the formidable due of John Whitaker (GBR) and Bertram Allen (IRL) will be in action for the third round of the Championship, with the pair already proving their mix of experience and talent an intimidating combination for Valkenswaard United. It's set to be a fascinating battle between teams featuring unique pairings never before seen in the sport of show jumping; Olympic champion and legend of the sport Rolf-Göran Bengtsson (SWE) will make his debut on the League, pairing up with Gregory Wathelet (BEL) as another phenomenal team combination for the Paris Jets. Miami Glory will again utilise Olympic Gold Medallist Scott Brash (GBR) and rising star Jessica Mendoza (GBR) - an impressive duo who will be sure to be aiming to push the team back up the ranking leaderboard, where they currently sit in 4th.

Just one point behind the ranking leaders, Shanghai Swans will be looking to capitalise on their recent win, and have put forward Ben Maher (GBR) and Jessica Springsteen (USA), with the American rider featuring for the first time on the team in the League Championship. Athina Onassis de Miranda (GRE) will also make her GCL debut with Madrid in Motion, teaming up with the experienced Brazilian rider, Pedro Veniss, who has featured in both events of the season so far. Antwerp Diamonds gives the opportunity to U25 riders; Jos Verlooy (BEL), who looks on fine form following his LGCT Silver Medal in Mexico and Audrey Coulter (USA) who helped the team secure the GCL Silver medal at the opening event in Miami Beach.

Ranking leaders Monaco Aces will field a new combination of Daniel Bluman (COL) and Schuyler Riley (USA), and Vienna Eagles will put forward the impressive new combination of Lauren Hough (USA) and Rodrigo Pessoa (BRA). Ones to watch will be Cannes Stars riders, LGCT Mexico Grand Prix winner Roger-Yves Bost (FRA) and Marco Kutscher (GER) who will be in action this Sunday.

Laura Kraut (USA) will be back in action for the Rome Gladiators, teaming up with Marlon Zanotelli (BRA), and the consistently on form Sheikh Ali Bin Khalid Al Thani (QAT) will return to compete alongside U25 rider Hamad Al Attiyah (QAT) for Doha Fursan Qatar.

The action kicks off at 15:30 local time on Sunday 24th April - be sure to tune in live via GCL TV, you won't want to miss this!