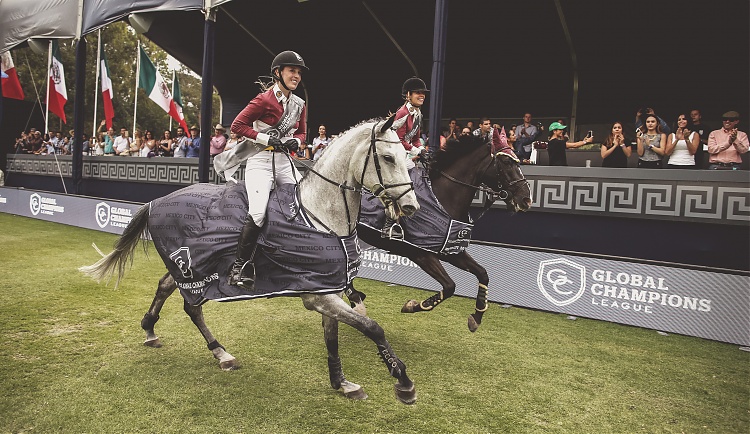 The championship is accelerating following two nail-biting competitions in Miami Beach and Mexico City as teams chase points and prize money around the globe.

The ranking battle has intensified, with Monaco Aces the new leaders, just one point ahead of Shanghai Swans, who in turn are one point ahead of Miami Beach winners Valkenswaard United. Miami Glory and Antwerp Diamonds are currently tied in fourth, just a further point away from the top three. As the Championship heads to Antwerp for the first European leg, the stakes are raised for all the teams as the momentum of the new format builds.

Thousands of fans turned out for the new GCL team competition adding to the already colourful and exciting atmosphere at the show ground. The high-energy signature music of the teams, including tracks by Calvin Harris, Rihanna and Bruno Mars and theme music from Star Wars and 007, elevated the energy in the big arena.

Javier Salvador, co-owner and manager of current GCL leaders Monaco Aces, said: "This is amazing for the sport and it is great to be part of a team and involved. It's having a huge impact on social media." Excited fans queued for autographs from the team riders and easily identified with the colourful polo shirts emblazoned with team names and logos.

Scott Brash, of team Miami Glory said: "It's great for fans because even if they don't know about the sport they can identify with their own city.”

In true Mexican style, the Global Champions League Teams were greeted with a boisterous welcome as they walked the course in preparation for the first round of the second leg of this revolutionary new team competition. It was a test until the last rail, but it was the graceful pair of Edwina Tops-Alexander (AUS) with the 12 year old gelding Ego van Orti and Janne-Friederike Meyer (GER) with the grey 11 year old mare Charlotta representing Shanghai Swans who finished with best score of the day.

Donning their custom polo shirts, twelve teams of two walked, planned and practiced together as well as rooted for one another as they took on the challenges of the courses. Set at 1.55m, the first round included fifteen efforts that proved to be a true test for the top riders. Difficult lines and light jumps caused rails and a couple of eliminations. Five of twenty-four riders did negotiate the track without fault, but no teams went into the second round with a zero score.

During half-time, between rounds, the entertainment was as fabulous as the competition, with the dynamic Raiz de Mexico Mariachi band and Ballet Folklorico Mexicano Adelitas dancers adding a unique and colorful flair. As the top eight scoring teams walked the second round, the buzz from the crowd continued to build. Once again the grandstands, sidelines and VIP were filled with adoring fans and supporters who were thrilled to see the world's best in equestrian sport.

Eight teams would go through to round two. Shanghai Swans and Doha Fursan Qatar with team members Bassem Hassan Mohammed (QAT) with Argelith Squid and Sheikh Ali Bin Khalid Al Thani (QAT) on the experienced Imperio Egipcio Milton, were tied at four faults each and at the top of the scoring board so far. Sitting in third were Cannes Stars, with Kevin Jochems (NED) and Zanzibar, and Roger-Yves Bost (FRA) on the chestnut 10 year old stallion Farfelu de la Pomme, representing the blue and white team.

Jumping clear was only part of the test in the second round of twelve efforts, in order not to accrue time faults the riders were required to keep up a solid gallop and stick to a tidy track. Eight of the sixteen riders who returned finished with time faults, three with only those time faults added. Tops-Alexander and Laura Renwick (GBR) finished with just one time fault each, and Roger-Yves Bost with two, adding those points to their total. Four riders rode without fault in the second round - Gonzolo Anon Suarez representing Madrid in Motion rode a sensational round on a horse he had never competed on before. Maikel van dar Vleuten (NED) of Monaco Aces, Mohammed for Doha Fursan Qatar and Harrie Smolders with the impressively consistent grey gelding Bokai for Antwerp Diamonds also jumped clear. The pairing have been the most consistent, and potentially valuable, on the League so far; jumping every round clear and recording the best results for the team.

However clean rounds are only half of the equation, as the both team members scores are added together, which means every time fault and every rail counts.

​Ultimately, the Shanghai Swans topped the field with a final two round score of 10, earning a prize of 60,583 euros.

Earning an impressive second place were Roger-Yves Bost (FRA) and Kevin Jochems (NED) of Cannes Stars. Making a name for himself as another twenty-year-old one to watch, Jochems was clean in round one and scored five faults in round two. Yves-Bost added 10 to the total, with a final score of 15.

Jochems is thrilled to have an opportunity to compete at this level and be a part of the GCL. “It’s a great opportunity, I’m only 20 years old and it’s very special to be part of the team - many people my age cannot be part of those spectacular shows.

Normally equestrian sport is quite an individual sport, however with the GCL there will be more teamwork and we will try to do the best for each other.”

The League now heads to Europe and Antwerp, Belgium, for the third round of competition as the 2016 Championship battle continues.

Jan Tops, Co-founder of Global Champions League: “It was nail-biting. The cards are totally shuffled again from last week, which is very exciting. It was a tough first round, and more demanding than last week. The whole ranking has changed, and that’s what it’s about - it’s exciting to the last moment.”

Janne-Freiderike Meyer, Shanghai Swans: “First I have to say thank you to Jan and Edwina that they gave me the great opportunity to be part of the team. It’s a great chance and of course I was really excited to be part of the team. I like to ride in a team - it’s always a little bit of extra excitement and extra pressure, but also extra fun! Today we had a really great day - Edwina and I walked the course together. I’m proud of Charlotta, she did a great job today. We have a long flight home but it will be a really nice one!”

Edwina Tops-Alexander, Shanghai Swans: “It was super exciting - it’s a unique experience, as you can choose who you want on your team. We chose Janne to be part of the Shanghai Swans; we know she’s a strong rider. I was a little nervous as yesterday I suggested she changed her entries and she listened to me! I thought it would probably be a little bit like last week, but as we walked the course I thought ‘woah, this is quite big’. I thought she was a little nervous so I felt responsible, but she did an amazing job and like she said, her horse Charlotta hasn’t quite got that experience but, today she gained a lot more experience! We’re just super happy and really excited to continue the rest of the season.”

Kevin Jochems, Cannes Stars: “It’s amazing to be in a team with a really good rider like [Bosty]. He showed how good he is yesterday after winning the Grand Prix and to make this result together is really awesome.”

Roger-Yves Bost, Cannes Stars: “[Kevin] is a good rider, which makes it easier for me! He rode the first round very well - clear - which was important as I had two down. He did a very good job.”

Leopold van Asten, Monaco Aces: “I was first to go, and a little disappointed with my result - I had two down towards the end. Luckily Maikel had only one down. We saw very quickly that it was a tough course, with many faults. The second round we were a little unlucky coming in taking the combination, but had a super clear from Maikel. This made us third, and for the League [rankings] it’s good.”