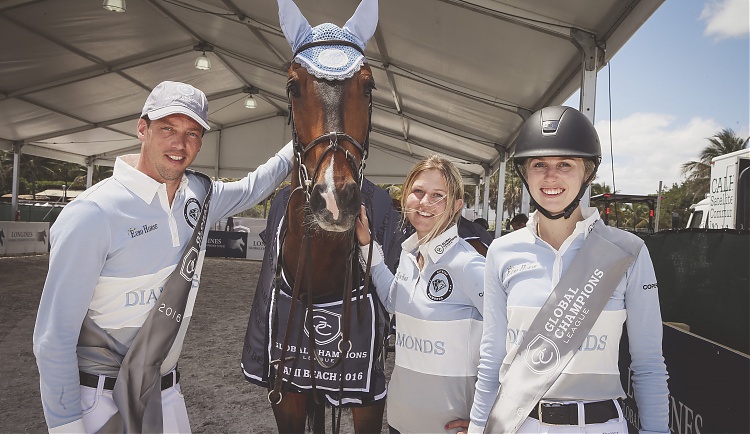 Tactical team talk is hotting up as riders prepare for the second leg of the new Global Champions League after the stunning debut in Miami Beach last weekend.

With team Valkenswaaard United already on top of the leaderboard, other teams will be battling to move up the order in the 2016 Championship. The season opener was a spectacular launch with the colourful new team kits, logos and sponsors on display. Team riders are reflecting on the first stage in Miami Beach and plotting tactics and strategy for Mexico City and the stunning new venue of Chapultapec Park.

Equestrian enthusiasts and new fans packed the grandstands and lined the ocean front arena to catch a glimpse of the exhilarating competition, which saw many of the world’s top riders and horses pair up for the first time in history - uniting intriguing combinations never seen before.

World number 3 Scott Brash (GBR), who competes for team Miami Glory, highlighted the significance of uniting with riders from around the world, based on strengths and experience: "To be part of the League and riding with different riders who you’d never thought of riding with is really exciting. It’s a great new format, it’s good to keep updating our sport and for the U25 riders it’s a fantastic opportunity and very important in order to keep bringing the new generation through.”

His teammate, leading US rider Kent Farrington who finished third alongside team mate Georgina Bloomberg (USA) this weekend spoke of the new format: "I think it’s a great competition. It’s one thing to conceptualize the idea and it’s another to realize the idea as we did today. That’s really exciting for our sport and exciting for all of us to be a part of. I think that it worked well, it was easy to follow.”

Indeed, the brand new graphics on screen mirroring the style of Formula 1, and the website format simple and clear. The new concept encourages new fans to immediately identify with their home cities, with passionate show jumping enthusiasts rooting for their favourite riders and selecting favourite teams to support.  Legend of the sport, John Whitaker (GBR), who rides for team Valkenswaard United agreed and spoke of the top sport on show at the debut: "It’s been great to be a part of it and like everybody says, it’s easy to follow and it was tension right to the last fence.”

An intense it was, with the pressure on the riders to not only perform their best for themselves but for their team. John’s teammate, rising star Bertram Allen (IRL) highlighted the significance of joining forces with such an experienced name in the sport: "It’s great, and to be with John is fantastic. It’s an honour to be on the team with him and it was nice for us to get a win so I’m delighted.” Scott agreed, speaking about the potential of the team combinations: "To be part of the League and riding with different riders who you’d never thought of riding with is really exciting.”

Already rivalries are forming, with camaraderie between teammates growing as the competitive nature of the world’s best begins to show. Quentin Judge (USA) who competes for team Cascais Charms said: “This week [the team members] were having a little camaraderie ready for Sunday. It’s going to be really exciting for everyone, it’s a different aspect of the sport.”

With innovation and development of the sport targeting new audiences and a significant step forward in the progression of show jumping, Sunday’s inaugural Global Champions League was a moment in history. Champion Dutch rider Harrie Smolders, who rides for team Antwerp Diamonds, summed it up: "I think we saw some exciting sport. The Global did so much for our sport and they deserve our support and we are all going to make this into a successful story.”