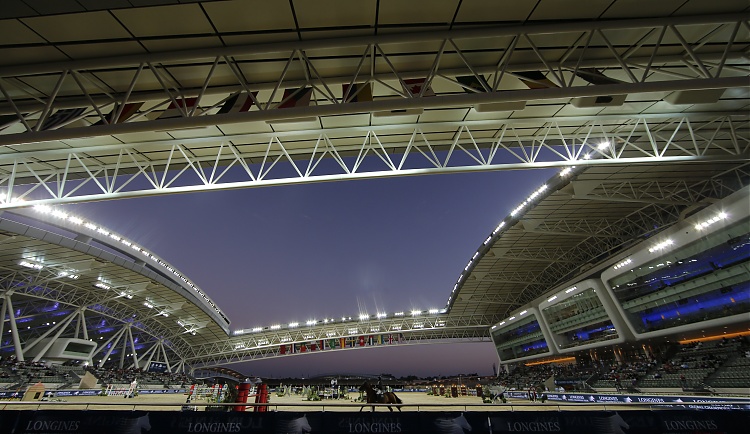 The countdown to the 15th and final event of the 2017 Longines Global Champions Tour and Global Champions League is on, with less than two weeks before the world’s top horses and riders compete in the thrilling showdown at AL SHAQAB, Qatar from 9th-11th November.

After a season which has seen more twists and turns than a Formula 1 circuit, the scene is set for a five-way battle for podium places in the LGCT finale and a fascinating head-to-head between the two leading GCL teams. See the rollercoaster season so far in this fast-paced short film released today re-capping the highlights of 2017 please click here.

This year’s event will be particularly special for AL SHAQAB, marking the 25th anniversary of the prestigious, cutting-edge equestrian facility. To celebrate the auspicious anniversary and the vision of AL SHAQAB's creator, HH The Father Emir, there will be a special program during the Longines Global Champions Tour competition on 10 November 2017 at 17:45 local time. In addition AL SHAQAB, a member of the Qatar Foundation, will host National riders who have the opportunity to compete alongside their country’s heroes such as Olympians Sheikh Ali Bin Khalid Al Thani (QAT) and Bassem Hassan Mohammed (QAT), as well as the majority of the top international show jumpers from around the world.

Speaking about the upcoming event, LGCT President and GCL Co-Founder Jan Tops said: "We are all looking forward to this thrilling climax to the season at the incredible venue of AL SHAQAB. This year is particularly special as we join AL SHAQAB in celebrating their 25th Anniversary, and I have no doubt that the weekend's show jumping will be another showcase of top sport and top entertainment as the equestrian world focuses on Doha."

New LGCT Champion Harrie Smolders (NED) cemented his place in history by taking the crown at the penultimate event in Rome. But a mere 15 points separate the following top five riders, and a knife-edge points battle continues with Lorenzo de Luca (ITA), Christian Ahlmann (GER), Alberto Zorzi (ITA), Maikel van der Vleuten (NED) and Scott Brash (GBR) - all of whom will be tussling at the sharp end of the grid for their final chance to take a coveted podium place.

The Global Champions League race to the finish could not be more exhilarating, with Hamburg Diamonds and Valkenswaard United locking horns in the final high stakes battle - just 17 points between them. With every point counting, teams will be pulling their star strikers and top horses off the bench and strategising to maximise their success at the spectacular state-of-the-art arena.

Just 6 points separate St Tropez Pirates, Miami Glory and Mexico Amigos - currently 3rd, 4th and 5th in the rankings respectively - and with 30 points for a win, plus no drop scores, there is plenty of potential for the final order to be shaken up at AL SHAQAB.

The final GCL competition of the season will kick off at 14:00 local time on Saturday 11th November, with the Longines Global Champions Tour Grand Prix taking place at 18:00 as the sun descends over the spectacular city of Doha. For the full schedule, please click here.

All the action will be on our live streaming platforms GCT TV and GCL TV with expert commentary and analysis and special studio talk shows and behind-the-scenes features. A full broadcast schedule will be released soon.

Diamonds Shine Brightest of All To Take 2017 GCL...

Tactics and Strategy: The GCL Showdown is...