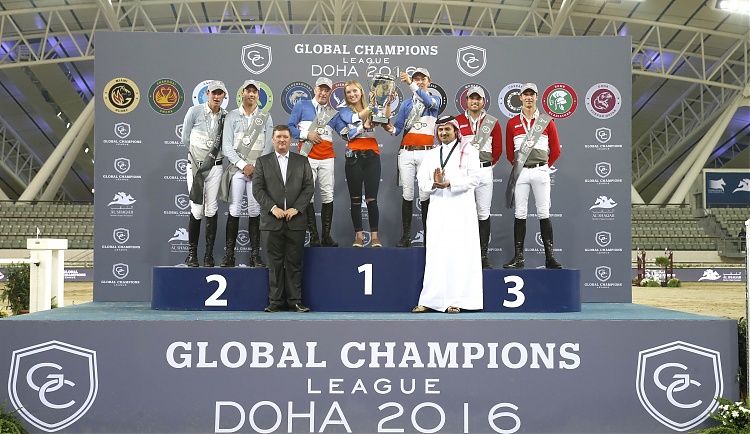 In a nail-biting showdown, Valkenswaard United took a sensational debut Global Champions League title, with winning riders John Whitaker and Bertram Allen declaring the first ever GCL season “fantastic” as the team combatants vowed to go into battle again in 2017.

Throughout the 15 leg series, the team - John Whitaker, Bertram Allen, Emily Moffitt and Eduardo Menezes - remained consistently at the top of the overall rankings, racking up a record four wins over the course of the championship, which offered up an incredible €7.5 million in prize money. The blue, white and orange team secured the lion's share of the €4.5 million bonus in a dramatic night under floodlights at the magnificent AL SHAQAB, a member of the Qatar Foundation.

It had been a scintillating inaugural season for the innovative new GCL team competition, as the team contest first played out on the beach in Miami, to the super yachts in Monaco harbour, in big grass arenas, small sand arenas, by day and by night. And it all came down to the wire in Qatar tonight. Like all great championships the suspense held until the final moment of the season, with the leading teams fielded heavyweight combinations in a clear sign of the fierce determination to make history and take the first-ever Global Champions League title.

Since the start of the season tactics came into play. Valkenswaard United’s top duo of John Whitaker and Bertram Allen threw down the gauntlet from the word go, winning in Miami Beach. As the 15-event circuit progressed strategy was more and more to the forefront as teams fielded their best rider and horse combinations to suit different arenas and venues. Youth also played a strong part in the GCL format, with under-25 riders in the teams playing their part and winning valuable experience. Talented young Emily Moffitt, of Valkenswaard United, stood on the podium with John Whitaker and Bertram Allen and the GCL trophy sending a clear message about the important of developing future talent in show jumping.

A dramatic first round of the final left only two teams in contention for the overall title after a shock exit by one of the favourites. Heartbreakingly, Monaco Aces dropped out of the title race after Daniel Bluman and Apardi clocked up 12 faults despite team mate Leopold van Asten’s clear round on VDL Groep Miss Untouchable, with the team strong contenders going into the final. In another shock in the thrilling team competition John Whitaker and Bertram Allen of Valkenswaard United picked up four faults apiece leaving the team just scraping into the second round in eighth place, while closest rivals Antwerp Diamonds carried through four faults from Harrie Smolders as teammate Jos Verlooy jumped clear.

The first round result meant the Championship remained on a knife-edge right until the last moment, as Antwerp Diamonds and Valkenswaard United faced each other in round two to see who would make history with the first Championship title. Rolf-Goran Bengtsson and Nicola Philippaerts of Paris Jets performed stunning clears rounds, leaving them with an enviable clean sheet going into round two. Laura Kraut and Laura Renwick of Rome Gladiators and the heavyweight Cannes Stars combination of Roger-Yves Bost and Marco Kutscher also pulled off faultless rounds under intense pressure, leaving them on a zero score. Joining them would be the Cascais Charms duo of Andreas Kreuzer and Philip Houston, Shanghai Swans’ Janne-Friederike Meyer and Alexandra Thornton and Danielle Goldstein and Lauren Hough for the Vienna Eagles.

The stunning floodlit arena of AL SHAQAB was the perfect backdrop for the final stages of the Global Champions League, as the team riders took to their horses for the final time in the 2016 season. The explosive growth of show jumping in Qatar, continues and tonight Sheikh Joaan bin Hamad Al Thani, brother of the Emir of Qatar, was at Al Shaqab to see the GCL final and national riders of all ages competing.

First to go in the second round, John Whitaker, put in a speedy clear with his top mare Ornellaia, throwing the gauntlet back down to the Antwerp Diamonds and keeping their Championship hopes alive. The pressure was on the U25 rider Jos, who then picked up a further four faults, putting the two teams on an equal score. An anxious wait ensued as the GCL of Doha played out before the next 2nd team riders took their turn, with the pressure rocketing sky high as it all came down to the final rounds. Friend and rival Bertram Allen rose to Jos' challenge, but an unusual refusal from Romanov saw Valkenswaard United drop back down the order, with the pressure heaped back onto the shoulders of final Antwerp Diamond, rider Harrie Smolders.

Knowing he had to jump clear to be in with a chance of winning the title, the Olympic Dutch rider flew around the challenging 1.50/1.55m course with top stallion Emerald N.O.P., but rolled a pole at the penultimate fence putting the team in third. This meant Valkenswaard United would claim Championship victory in what has been a rollercoaster of season battle, with the formidable combination of John Whitaker and Bertram Allen contributing to three of the team’s four wins this year.

The Doha leg of the GCL was won by Paris Jets with Rolf-Göran Bengtsson and Nicola Philippaerts blasting away the opposition, jumping double clear a full seven seconds ahead of the rest of the field in a stunning display of horsemanship and skill. The slow but steady tactics of Cannes Stars saw them take silver in the Global Champions League of Doha. Despite a strong season, Rome Gladiators had a disappointing night, after a refusal from Laura Renwick’s Bintang II eliminated the team in the second round. But because of their impressive performances over the series they still finished fourth overall in the Championship, just behind the Monaco Aces.

Team spirit has grown and evolved as the season unfolded around the globe as riders from different countries had the chance to compete together for the first time ever in the sport. And after tonight’s final, riders were already looking ahead to another round of team combat in 2017.

Jan Tops, Co-Founder of the Global Champions League: “You can see there was a lot of pressure to take this important title today. John and Bertram had a great season. Emily Moffitt (Under-25 rider) is in her late teens and young riders have a chance to experience this and it is young people that will drive the sport forward. That’s what the concept is about. It is a great concept and attractive for the media. Owners really enjoy it and want to do better next time even if they did not win this time. It is about taking the riders and horses that are going to win and that will come more and more into play in the future.”

John Whitaker, Valkenswaard United: "I think it has worked really well. We tried to help each other out today. I was really disappointed with my fence down and that put pressure on Bertram to get a fast clear to keep us up there. We only just made the second round. I jumped clear and I thought: ‘we are in with a shot’ again. I’m very relieved to win, we have had a great season. Bertram had the speed when we needed it. That’s what it is all about."

Bertram Allen, Valkenswaard United: "It’s been brilliant, it’s been a long season. We were battling out the whole year, it’s been a fantastic [season]. If you’re not consistent and fully revved up and concentrate, you have a bad result and that will compromise the end of the season.”

Harrie Smolders, Antwerp Diamonds: "We have to thank team Coulter and Copernicus Stables for this great experience and we are looking forward to continuing next year. With the experience of Axel (Verlooy) and me, we know which horses to have. Well done to Valkenswaard United."

Jos Verlooy, Antwerp Diamonds: "I had the experience to ride in the same team as Harrie and that would never have been possible and I am very thankful for that. To Valkenswaard United, well done and see you next season!"

Leopold van Asten, Monaco Aces: "We already had a very consistent season, but unfortunately we were not in the 2nd round at the final. We competed this year with all of our riders and were happy with our performance. We hoped for more on the day, but that was our fault."

Daniel Bluman, Monaco Aces: "It has been a fantastic experience to ride with riders from different countries, it has been really great. It was a bit disappointing tonight and unfortunately we were not where we wanted to be."

Rolf-Goran Bengtsson, Paris Jets: "It has been a great start to the event for us. We did not get going at the beginning of the series but finally we did a good job here. It is nice for young riders to get experience on the team."

Nicola Philippaerts, Paris Jets: “I’m very happy, we had a good team. It’s very special [teaming up with Rolf]. Normally we always ride with your own country and always the same people. Now you can ride with the world’s best riders, and for sure it’s nice as a young rider to get experience with these good riders in the team."