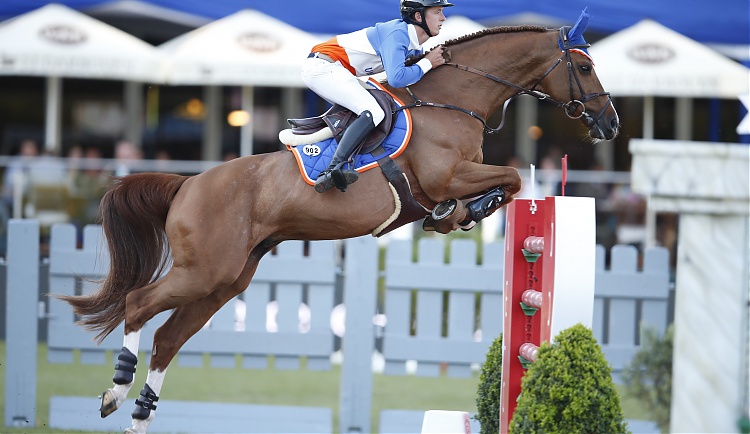 The heavyweight squads in contention at the final of the inaugural Global Champions League in Qatar can be revealed today with the winning team set to make history.

Current leaders Valkenswaard United are in pole position going into the final on a total tally of 309.5 points. The combination of John Whitaker (GBR) and Bertram Allen (IRL) has proved formidable in the debut GCL season, and they will unite once more, with an incredible three of the team’s four wins (Miami Beach, Hamburg and Vienna) under their belts already. Despite more than 40 years between them in age, John and Bertram have solidified their partnership and friendship, with the men of few words winning hearts around the globe. Talking about the forthcoming competition Bertram said: "The GCL final will be really intense. I'll be teaming up with John [Whitaker] again for Valkenswaard United, and as I've said before its a real honour and privilege to be competing on the same team as him. He's a legend and it's not something I'd ever have had the opportunity to do without the League. We'll be going into the final to win, and are bringing our top horses to help give us the best chance. We'll be giving it our all."

Fierce rivals and looking to knock the closest big threat off the top spot are the Antwerp Diamonds, who will also field a combination of experience and youth. Harrie Smolders (NED), an anchor for the team will team up with protégé Jos Verlooy (BEL), the young Belgian talent whom he has trained since Jos was three years old. The pair have also had strong results this season, with both frequenting the podium multiple times throughout the year, and Jos contributing to the only home win of the year to date, in Antwerp. While Jos and Bertram remain firm friends outside of the arena, rivalry is intense between the two young talents, and it will be a high stakes battle as the final round plays out.

Hot on their heels, and just 1.5 points behind in third, are the Monaco Aces, who are also in contention for the overall win. Maikel van der Vleuten (NED) and Daniel Bluman (COL) - both of whom competed at this year’s Rio Olympics - will team up to add to their tally of 299.5 points overall. Similarly, the Rome Gladiators, who currently hold 4th place overall, will unite ‘Team Laura’ once more, with the Madrid GCL winning combination of Laura Kraut (USA) and Laura Renwick (GBR) in force for the final.

While it looks to be a four horse race to the finish, the teams will be jostling up and down the rankings to set the order in what’s been a phenomenal debut for the innovative new format. Home team, Doha Fursan Qatar, will bring together Olympic rider Ali Yousef Al Rumaihi (QAT) and young talent Hamad Al Attiyah (QAT) to compete in front of a home crowd, with the magnificent AL SHAQAB, a member of Qatar Foundation, the perfect backdrop to the exhilarating final. AL SHAQAB was established as part of HH The Father Emir Sheikh Hamad Bin Khalifa Al Thani's vision and passion to preserve and perpetuate the Arabian horse in Qatar. It has since developed into a major international equestrian facility encompassing multiple equine disciplines.

Further Olympic athletes will unite like never before, with Rolf-Göran Bengtsson (SWE) in action with Nicola Philippaerts (BEL) for the Paris Jets. Roger-Yves Bost (FRA) will team up with Marco Kutscher (GER) for the Cannes Stars, and Scott Brash (GBR) will join forces with U25 rider Jessica Mendoza (GBR) for the Miami Glory team. Another winning combination will be back in action, with the Vienna Eagles combining Lauren Hough (USA) with Danielle Goldstein (ISR).

Fresh from their recent successes, Madrid in Motion will field Alberto Zorzi (ITA) and Gonzalo Anon Suarez (ESP), both of whom have contributed to the team’s two wins this season. Cascais Charms winning rider Andreas Kreuzer (GER) will return once more to compete with compatriot Philip Houston (GER), and the Shanghai Swans will see another winning rider, Janne-Friederike Meyer (GER) return alongside Alexandra Thornton (GBR) for the final round of action.

With the final round of the 2016 season the opener for the weekend in Doha, all eyes will be on the combinations as they take centre stage on Thursday 3rd November at 17:00 local time. As always, the full competition will be streamed live via GCL TV, and you can keep up to date with all the teams on social media. Tickets for the final are still available, and can be purchased by clicking here.